Me and Pal Kevin headed up north, had a lovely dinner and then ran over to the Gateway theater where Austin Books hosted a screening of Captain America with the Austin Chronicle. In attendance: Mark Waid.

Firstly, I am a big fan of Mark Waid's work on Flash, Captain America, Kingdom Come, Irredeemable and a whole lot of other books and characters. Secondly, of Marvel's roster of characters, Captain America is one of my three favorites (with Spidey and maybe Rocket Raccoon).


So, this was kind of a big deal for me. Oh, and I also won a hat by answering a trivia question.

I actually had all the books that ABC had brought with them to purchase and get signed (like I said, I'm a Mark Waid fan), so I thought - ah, heck.  Why not?


Mark Waid will be at Austin Books on Saturday from 4-7pm, if you have a chance to stop by.

Late Edit:  I went and saw Captain America this evening, and so I missed this until, oh... its about 1:00 AM on Saturday.  But the last post to the DCU blog, The Source, was just a straight up mea culpa and pledge to improve how DC deals with its female characters, creators and all of its fans.

One of the things that DC said it would try to do under the New 52 was become more agile in delivering content.  If something wasn't working or selling, it wouldn't have a long shelf life.  Likewise, they would be willing to try new things.

DCE certainly can't have liked that the major story around the company coming out of CCI hasn't been the New 52 (of course, that was old news by Day 1 of the Con).  Instead, its been the gender equity issue in comics and how at every panel fans (well, maybe fan) would stand up and ask why more women weren't working on their books in the relaunch.  A bit of math DID demonstrate the the number of women dipped from 12% of the DC creative pool to 1%.  which... yikes.

A Brief Hiatus - Back Next Monday

At the risk of losing readership (both of you.  What up, Simon!), I'm going on hiatus for a week.

We sometimes go through these bits of manic writing, and when we come down from them, we need a break.  You probably would like a break from me, too, unless you were one of our many usual readers who started their break yesterday by avoiding reading Monday's post (and many of you did.  Probably all for the best.).

I bought a copy of this print a while back from artist Jill Thompson.

There is nothing I do not like about this picture. 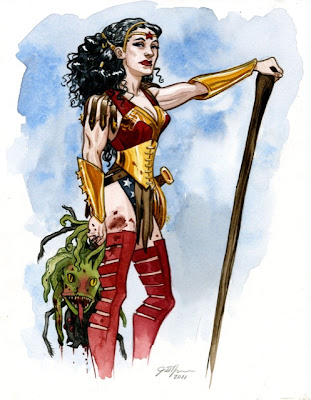 While I'm away, I'll have Ms. Thompson's rendition of Wonder Woman watch over you, if that's okay.  She already took care of the Gorgon problem we had in the conservatory here at League HQ.

You guys watch out for each other, take care, and don't take any wooden nickels.

Another Comic-Con has come and gone.  Not much to mention here as the announcements mostly rolled out prior to the Con, but a few things were sort of interesting.

Even if it weren't Austinite Chris Roberson writing it, I would be looking at IDW's Star Trek/ Legion cross-over.  I normally don't go in for these stunt, TV-tie in, non-canonical cross-over things, but its Star Trek and Legion.  With Roberson onboard, this should be FUN.

Fantagraphics to publish EC Comics collections four times per year.  That sounds pretty great, if Fantagraphics can keep to their own production schedule, which has seemed like a problem over there.  They're doing Pogo, right?  I mean, eventually (I ordered that book literally a year ago.  Latest is that its coming for Christmas.).

Marvel is trying to make one of my favorite short-lived Marvel comics, Alias, into a TV show.   To avoid brand confusion, I think they're calling it A.K.A.: Jessica Jones.  This might also mean Luke Cage on TV!  Sweet Christmas!

Mark Waid and that PVP guy had some interesting stuff to say about online comics (an area I realize I won't be too invested in until the iPad is far cheaper).

No doubt I'm in a little bit of a post-Con letdown.  The people attending might have all had fun, but most of the announcements broke way the heck before the con (which is fine.  Used to be you missed stuff in the deluge), but I can't escape a feeling of "well, that seemed a lot like re-arranging the chairs on the deck of the Titanic". I'm sure attendees had a great time, but...  I dunno.  Something just seemed off about this year's Con.

DC's New 52 initiative seems to have come out of the Con shakier than it was going in.  Whoops.  Something about how much reassurance DC felt was necessary can only remind me of how companies getting bought-out need to tell their employees to keep working hard because nobody is getting laid off.  And then everybody gets fired.  And, seriously, did they really think there wouldn't be some blowback?*

I have to wonder if TPTB at DC aren't having a "we've made a terrible mistake" moment back at DCU HQ today.

That said, according to the Newsarama.com article, all comic fans now sound a lot like an Our Valued Customers strip.


"I've never really cared about Superman before because he's got the whole boy scout thing," a fan remarked. "But Grant Morrison saying he's going to be more of a rebel now and more about what's right instead of what's legal, that sounds really cool."

Marvel seemed to be kicking DC's can pretty much everywhere, and it didn't help DC that Green Lantern went pretty much undiscussed while Captain America had a good opening weekend (not great.  Opened lower than the middling-performing Thor) and good word of mouth.  They have TV deals going (and the Wonder Woman fiasco at NBC is still fresh in everyone's mind), and the Fear Itself event seems to be going well at the House of Ideas.

I quit reading Marvel about two years ago aside from some Cap and Daredevil**, so I really don't know what's happening over there.  And given the "you have to read all 50 of these books" strategy for their series, and their dedication to the "event after event" model...  I'm not real inclined to head back to Marvel at the moment.

The truth is, my patience for a lot of the telling and retelling of the same old stories is wearing thin.  Solicits and announcements of another character dying and being reborn, of a "conspiracy", of dark secrets being uncovered...  I need something of a break, I think.

And, in reading the Con reports, as uninspiring as the "announcements" might be...  as always, the fans can be some of the worst part of the equation.  Oh my, we are the worst.  The absolute worst.

Hey, comics: Are you committed to hiring more women?

There was an interesting trend in the social media avenues of Comic-Con International 2011.  Gail Simone (Secret Six, Birds of Prey, the upcoming Batgirl) seemed to be living on Twitter throughout the Con (you can follow her at @GailSimone) talking up the sheer number of women at the con as fans, vendors, creators, and hawking etsy-type product.

As we've discussed here, in the past few years the number of women who've flooded into comics as fans has been amazing (even as the numbers in sales have plunged, which I don't get - except that I don't think anybody actually pays for the comics they read anymore*), and the web presence of female fans seems gargantuan, no matter how you slice it.  Anecdotally, on my routine trips to Austin Books and Comics, I see far more women now than what one saw in comic shops as recently as 2004.  Of course, I think ABC works hard to make the shop friendly to anyone who walks in the door.**


Why are there more women into comics than a few years back?

I suspect that a few dozen factors are at play, from the social changes we've seen in schools, parents no longer walking around enforcing ideas about what "girls are supposed to be like in order to get a man", a generation of parents raised on geek and sci-fi culture who think its keen when their children of either sex start geeking out.  But I also believe the marketing of sci-fi to a uni-sex audience really took off in the late 90's.  The 20-somethings of today were the kids playing with Pok-e-mon, reading Manga on the floor at Borders, and coming of age in a world where the 2002 Spider-Man movie was considered good entertainment for everyone (and not some anomaly).