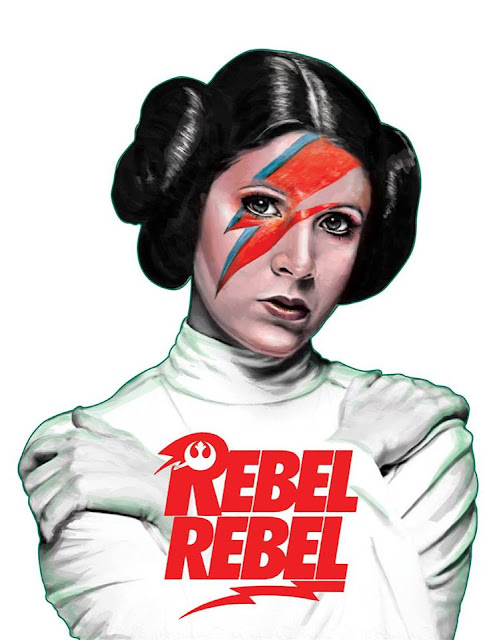 Where even to start?

Before the year (and my break) ended, I wanted to watch a couple of films as we say good-bye to a pair of women we're all going to miss.

No write up.  It was actually great seeing them both in their pivotal roles again.  We'll have these films forever, even if we've lost the women who made them. 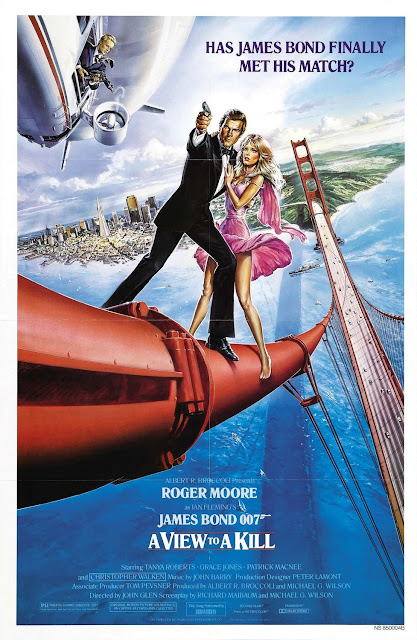 On the social medias, Jake asked me if I thought Never Say Never Again was better than Octopussy, and I told him I'd think about it.  I'm gonna go with "Octopussy is the clearly more fun of the two movies, but Never Say Never Again is the better-thought-out and probably smarter movie.  Less clowns."  But what I will say is that both are much better than Moore's final outing as 007, A View to a Kill (1985).

What it does have is a killer theme song, courtesy Duran Duran + John Barry. The video is a bit weird as Rhino didn't seem to have rights to anything but the song itself, so, no the video is not broken. Just wait til the 1:17 mark for audio.

As I mentioned with Octopussy, it feels as if View to a Kill was made for children, which is weird, because Bond is still humping his way across the Northern Hemisphere and killing people.  So it's likely meant to be some entertainment Dad can take the kids to see and not feel too bad, and lord knows my mom dropped me and my brother off to see this one in the theater with no parental supervision.

Debbie Reynolds Merges With The Infinite 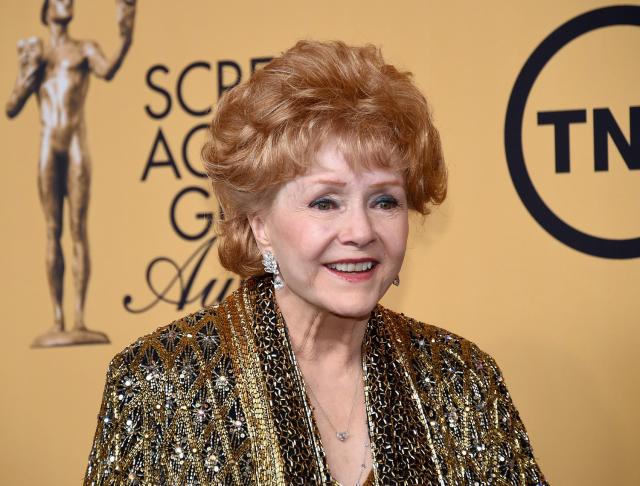 Actor, singer and dancer Debbie Reynolds has passed.  This would be something we'd cover under any normal circumstance, but, of course, Reynolds was also the mother of actor and author Carrie Fisher who left us just yesterday.  We can only imagine the tremendous loss Fisher's daughter, Billie Lourde, is experiencing at this moment.  She has our sympathies.

Reynolds is most famous for her part in Singin' In the Rain, one of the best remembered musicals of any era in Hollywood (and a heck of a film).  A few years back she appeared in Behind the Candelabra, a Liberace biopic, playing Liberace's oft-referred to mom. She was honestly pretty great.

Here's one of the show-stoppers from Singin' In the Rain, with Gene Kelley and Donald O'Connor.

Carrie Fisher Merges With The Infinite 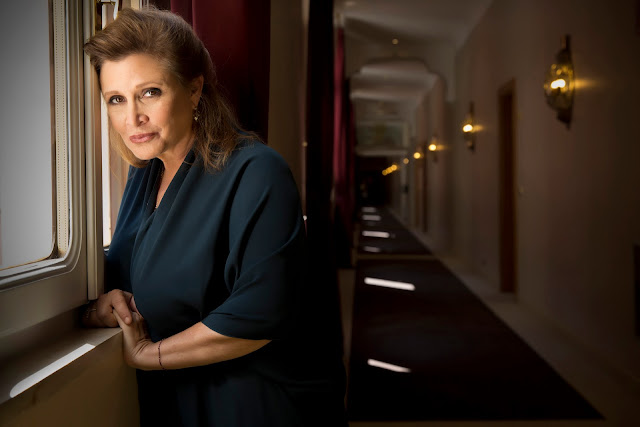 We are devastated to say that actor and author Carrie Fisher has passed.

I can't say I knew much about Fisher as a person - same things as everyone else.  The Hollywood pedigree, the issues with substance abuse, the biting wit, her dog, Gary.

It had been a very, very long time since I'd re-watched Star Wars, which I did when The Force Awakens was released, and it's amazing to see how darn good she was in that first movie, fluctuating accent and all.  I love all the main characters of Star Wars, no doubt, but if my personal collection of Star Wars stuff is any indication, and as longtime readers will probably have figured out, I'm a fan of Princess Leia first and foremost. 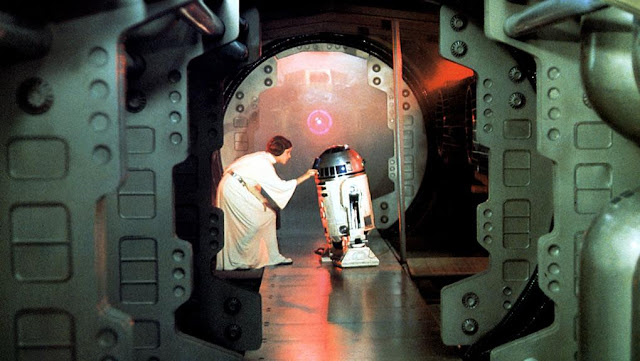 And, of course, her life seemed to be on such an upswing of late.  She would make Star Wars Episodes VII, VIII and IX, she had a book out that seemed to be moving a lot of copies, and from what I could see on social media, there was a generation of young women who were calling her "Space Mom", properly idolizing the character she'd imbued with tremendous strength, and building her social media army as she embraced them back.

She's leaving behind her daughter, Billie Lourd, a talented actress from what I hear.  Her mother, Debbie Reynolds, famed actress of the 20th Century.  Gary, too, of course.  And all of us, a planet of people who wished her the best not just as Princess Leia, but as Carrie Fisher, too.

I'm shocked she went so young and so suddenly, and I'm genuinely very sad.  You'd think this year would have toughened me up a bit.  I'm going to miss her on the talk show circuits, freaking out the robo-hosts when she goes on a tangent or drops some truth that makes them uncomfortable, or curls up on one of their over-stuffed couches, her shoes on the floor.  I liked this era of Carrie Fisher and General Leia.

She'll always be royalty to me. 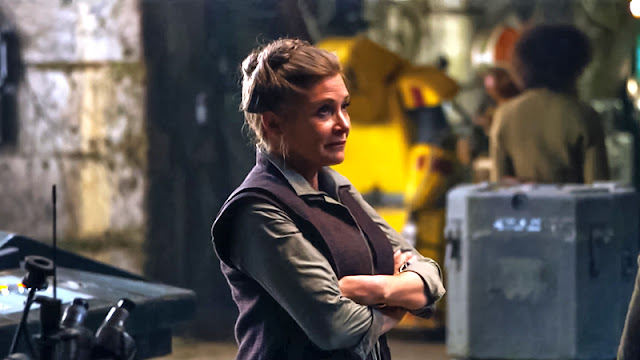 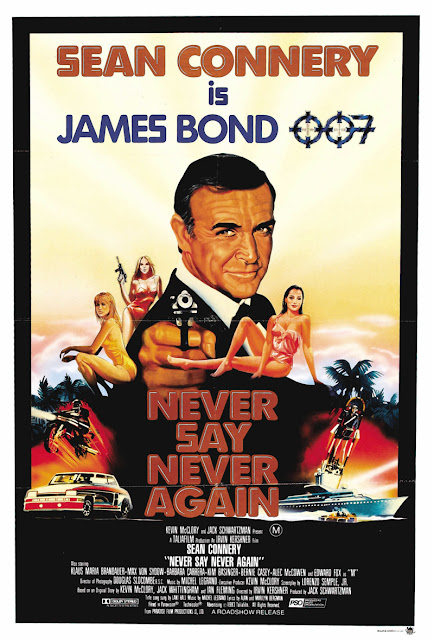 I was supposed to be spending the evening writing up Shin Godzilla, but the weirdest thing happened, and when Paul, Jamie and I went to the movie, for some reason the hard drive the theater received had a piercing 1khz over the entire soundtrack.  So, we got a refund, went to the bar nextdoor for a couple of hours and then we headed home.

Jamie wanted to finally see this rogue James Bond movie - and try as I might, I never quite remember the details of how this movie came to be.  I know the ownership of the character - filmwise - was under contention or something, and that problem continued until they settled their differences and we got Casino Royale.  So all's well that ends well.

But this film is not by the Brocollis or at MGM.  As the film's credits rolled at the end, Talia Shire gets a special credit as a consultant to the producer, her husband, Jack Schwartzman.  Always glad to see Talia Shire is keeping busy.  And, of course, it starred a 53-year-old Sean Connery (really in terrific shape) coming back to the role that made him.

I was shocked to figure out I had never seen Never Say Never Again (1983), making this one of three I am positive I've never seen all the way through.  Or, if I have seen it, I have totally forgotten it, but that seems marginally unlikely as I've realized here and there what I've seen before as we've gone along.

George Michael Merges With The Infinite 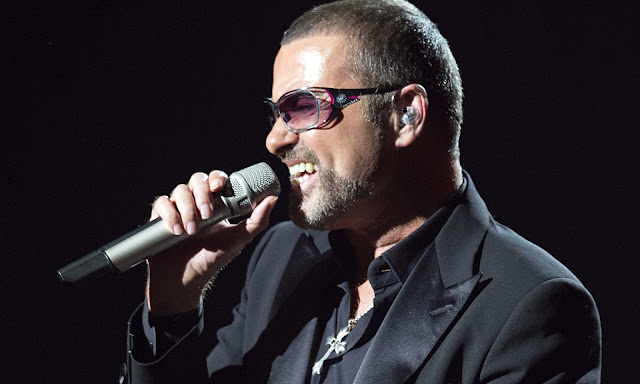 Utterly shocking if it weren't 2016 - today we found out that George Michael, the famed pop singer, had passed at the age of 53.

A lot of other people are going to memorialize Michael better than I could.  As much a singer and entertainer, the last couple of decades I've been impressed with how Michael pushed back on the MTV machine and made it through when his personal life was exposed in an era when coming out of the closet was something that could kill your career.

I liked some of George Michael's songs despite the fact he wasn't exactly in my wheelhouse, but my favorite was always Freedom! '90.  That's one of his "doesn't matter your genre of choice" songs.  It's just solid.

Let's remember George Michael today by wrapping up Christmas Day with some of his best.