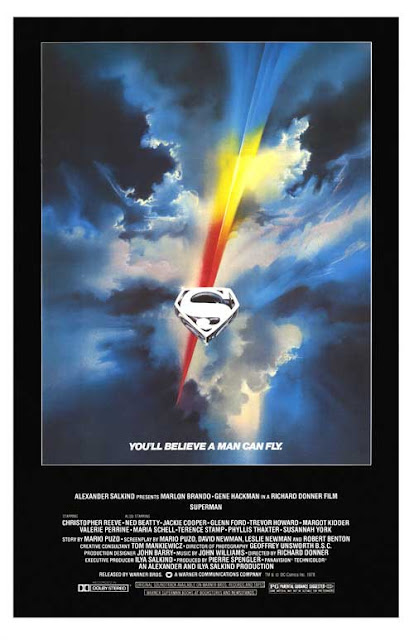 The other night Jamie and I watched Superman: The Movie for the first time in some time.  For us, that meansL it's been over a year since we sat down and watched it.  For me, it's been greater than 6 months.  It may be that same "more than a year" timeframe - these days I can no better remember a particular viewing of the movie than I can an airplane flight or yet another hotel room.  I've been trying to watch things new-to-me and kind of failing at it, and re-watching this movie, yet again, was not going to get me into anything novel.

What spurred us down this path was the recent article on a site called Polygon that discussed what most Gen-Xers and our forebears already knew:  Christopher Reeve is more than just a buff, cut dude in spandex.  He was a Julliard-trained actor.  And, he was working with a director and script that didn't just ask him to glower or look mournful across the span of two movies.  In comparison to the funeral dirge of Man of Steel and Cavill's limited acting opportunities and Batman v Superman and the inane use of the character, Superman: The Movie's myth-building, multi-tier, multi-faceted structure gave Reeves (and the film itself) the chance to do something deft and nuanced when it wasn't being broad and slapsticky.