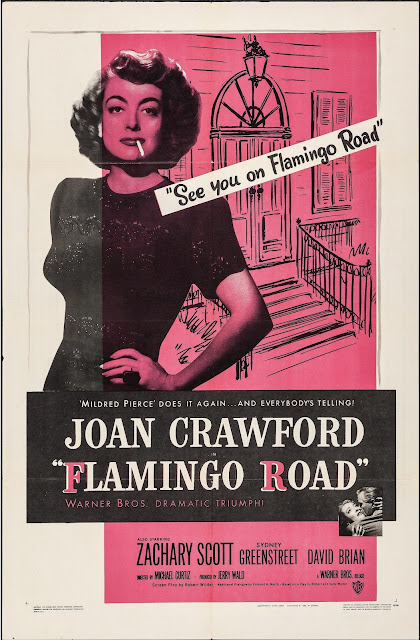 Watched:  05/27/2022
Format:  Amazon Watch Party
Viewing:  2nd?  3rd?
Decade:  1940's
Director:  Michael Curtiz
I remembered really liking this movie, but not many plot details.  What I really recall was that this was that age of post-Mildred Pierce Joan Crawford when she was having a second or third wind in Hollywood and back at the center of movies.
This one would be a fabulous bit of film for a good old-fashioned "gender in cinema" student paper, with a tough-as-nails female lead who still has to navigate the mid-20th Century gender and sexual politics and the less-than-ideal male figures around her.  Not to mention the presentation of other women in the film who do not have the benefit of being Joan Crawford.
Read more »
Posted by The League at 5/28/2022 03:57:00 PM No comments: I don't really care what this movie is about.  It stars Joan Crawford in her bangin' mid-40's, Sydney @#$%ing Greenstreet and Austin native Zachary Scott.  I mean, if you can't like that, we are not friends.
But, if you've not seen it - Flamingo Road is a grimy melodrama in the American South.

Ray Liotta Merges With the Infinite 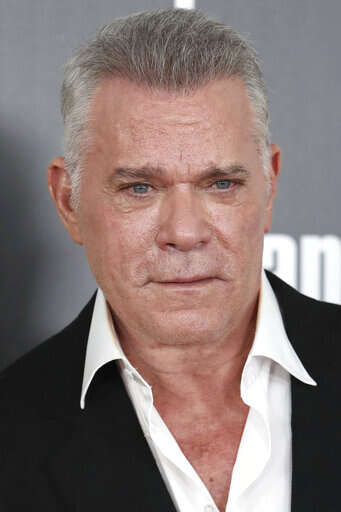 Ray Liotta, actor, has passed.  He'll be remembered most for his outstanding performance in Goodfellas and his iconic performance in Field of Dreams, but he was terrific in literally everything I saw him in.
Posted by The League at 5/26/2022 11:03:00 PM No comments: 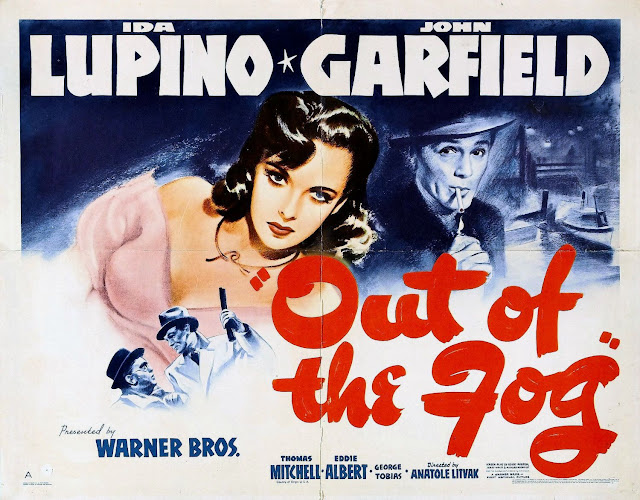 Watched:  05/24/2022
Format:  Criterion Channel
Viewing:  First
Decade:   1940's
Director:  Anatole Litvak
Well, Jamie likes Ida Lupino, so it's never a huge fight when I declare "I'm gonna watch an Ida Lupino movie" which does, in fact, happen around here.  And right now Criterion Channel had a handful of options, most of which I've seen but a few I hadn't.  Tonight's choice was Out of the Fog from 1941.
The film feels distinctly pre-war in content, a stage-like acting style derived from 30's-era norms plus - I assume - a desire to replicate the energy and pacing of source material from several of the players.  It's a tight 85 minutes of melodrama that feels like a mix of the socially conscious theater of the 1940's and some light crime.
It also stars John Garfield (who is typically John Garfield excellent), Thomas Mitchell, Eddie Albert and a handful of other familiar faces and just faces.
Read more »
Posted by The League at 5/25/2022 12:00:00 AM No comments: 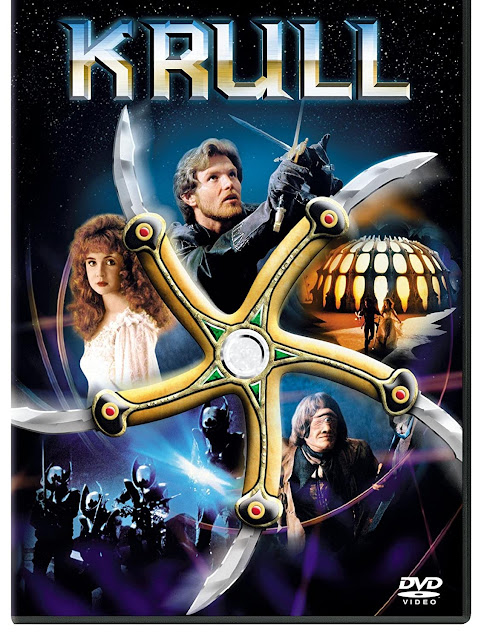 Watched:  05/20/2022
Format:  Amazon Watch Party
Viewing:  Unknown
Decade: 1980's
Director: Peter Yates
Even as a kid, I had no real affinity for Krull (1983).  It arrived as part of the fantasy movie blitz of the 1980's, and I didn't see it in the theater.  The trailer had some interesting imagery, but I just didn't watch it.  At some kid's birthday, I watched the Fire Mares part of the movie, said internally "what the @#$% is this?", but wasn't super interested.  But, as a kid with time on his hands and a VCR, eventually I watched the film.  However, most of my memories of the story itself are from a comic book adaptation I picked up somewhere.  I think we only bought the first issue.
About 16 years ago, Columbia House was in its death throes and had moved into DVD's.  I gave it a whirl and picked up 11 DVDs for $11 or whatever, and among my pickings was Krull.  Jamie and I tried to watch it, and I decided "this is boring" and we didn't try again.   On a rewatch, I am not sure why we thought it was boring.  It's not.  That's not really the crime to which the movie could be held accountable.
In fact, it's a very, very pretty movie.  The sets are immaculate and gigantic.  The exteriors are all over Europe in lovely pastoral settings.  There's some truly fantastic visual stuff happening, and in a lot of ways, the movie is genuinely well-directed when it slows down to have a beat or two.  The director, Peter Yates, is no slouch and did one of my favorite new-to-me films from the past few years, The Friends of Eddie Coyle, which could not be more different if Yates had physically been trying to get as far away from that movie as possible.
But, real talk, they kinda forgot to give anyone but the asshole wizard any personality beyond the thinnest layers atop an archetype.  It's weird.  There's an exposition guy who tells the "prince" what to do.  The price is princely (read:  nice but dim), and the wise old man is wise.  The stoic cyclops is stoic.  Perhaps because the actor cannot see and therefore cannot move.
Read more »
Posted by The League at 5/24/2022 05:13:00 PM No comments: 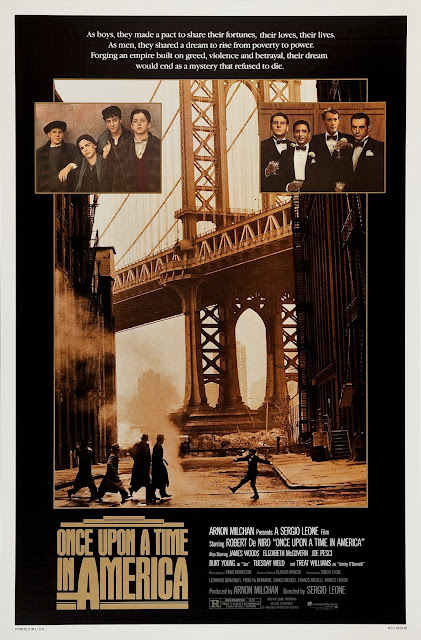 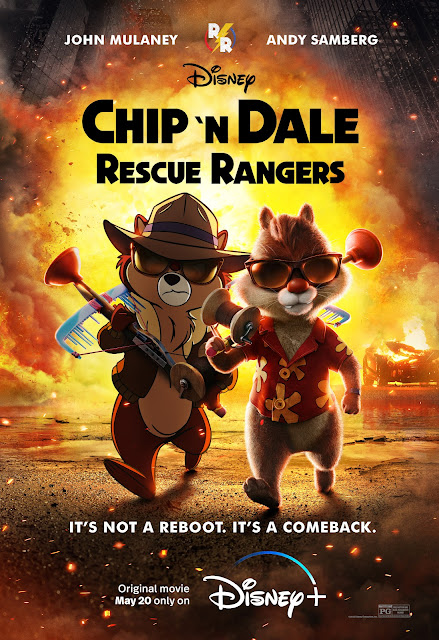 This is a weird one.  It's tough to separate from the weekend twitter meltdowns around the film which have been immediate, loud and remind you 21st Century people are soft, soft @#$%s with some incredibly screwed up priorities, and yet algorithms push these, the worst takes, into your feed.
I didn't watch Rescue Rangers which had an initial run of only 65 episodes, spanning a year and a half between 1989 and 1990.  I'm aware of the show, of course, and starting in 1990 I did watch Tale Spin when I walked in the door from a new school with an earlier release time, but between the timing of the airing of the show and a general disinterest, and being 14 and kinda moving on...  Anyway, back then, to be a nerd did not mean watching everything and hanging onto it forever in quite the way "fandom" insists we do today.
But I am a fan of John Mulaney and Andy Samberg, and guffawed at the trailer for the movie.  It had a nice "I can't believe Disney is letting them do this" vibe, and it was included at no extra cost in my Disney+ subscription.  It looked to be having a nice laugh at a lot of ideas around cartoons, nostalgia, updates and reboots.
There's some strong Roger Rabbit DNA to the film.  Humans and 'Toons co-habitate in this world.  A crime is committed that impacts Toons specifally.  Chip and Dale are actors who played Chip and Dale on their eponymous show (the original Disney shorts are not a part of this world).  All in all, back in the 1990's, we would have called this "postmodernism" in a media studies class.  It's a cute idea for a movie, appeals to older audiences while also pointing the movie and old episodes of the cartoon at kids with a family Disney+ subscription.
Read more »
Posted by The League at 5/23/2022 12:32:00 AM No comments: