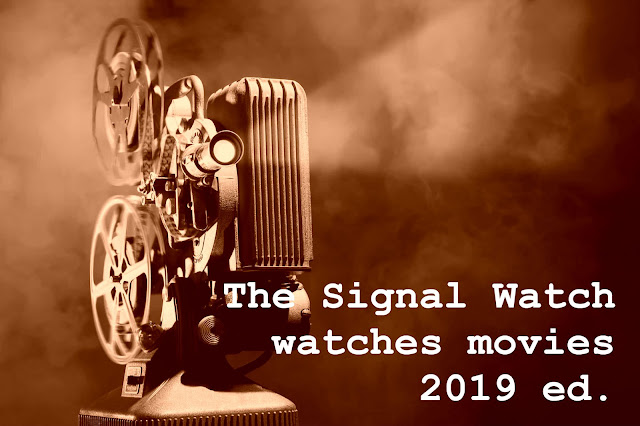 Well, 2019 was certainly a year that we mostly lived through.  As years go, I'm not giving it very high marks, but I did watch a lot of movies.  Which, boys and girls, is not so much an achievement as a thing which occurred.

In 2019, I watched 204 movies (click that link to see the spreadsheet).  This is likely a lifetime high, and I don't really know how or why that happened, because 204 is a good 20 more movies than last year.

I also wrote a post or recorded a podcast for, I think, every movie I watched in 2019.

This 204 number includes movies I saw more than once.  Example:  I saw Avengers: Endgame three times this year, so it is counted thrice.

The figure does not include partially watched films, half-watched Hallmark Christmas movies, or matter that I watched on TV that some people might consider a film, but I happen to not consider a film.

As always, I may have missed a movie or two.  It happens.  The data is accumulated from the blog - so if I forgot to post on a movie, it is not reflected here.  Also, dates watched on a movie reflect the date upon which I completed a movie, as I watch many movies broken up over 2-3 viewings.

Now, into the nitty-gritty.

A while back I realized I was re-watching too many movies and set a goal to watch at least 1/2 the movies I viewed as "new to me", no matter when they were released.

Never be afraid to pursue your dreams, kids.

I decided to track how many movies I watched for The Signal Watch PodCast, especially as we frequently watch 2 movies and compare and contrast them.

This year we watched 50 movies across 45 episodes of the PodCast.  But that's a lot of movies I wouldn't have likely otherwise watched.

So what did I watch that was recently released in 2019, in theaters, to streaming formats, etc...?

This is the squishiest category as I included movies I watched in non-theatrical formats as soon as I could - ie: didn't see them in the theater but watched quickly in another way, be it on the back of an airplane seat or on Netflix.

I watched 36 movies that were new in 2019, and if you want to include the multiple times I saw Captain Marvel and Avengers Endgame, I saw 40 movies released this year.

This category is somewhat useless as movies tend to include multiple genres, but I figured I'd try some organization.  You can review my selections under the Genre tab.

That's a lot of horror, which I attribute to our robust coverage of Halloween movies on the podcast.  And fewer Westerns than I'd figure on.  You can feel free to review my list and quibble, but I think it at least paints a general picture of what I watched.

I do watch new movies, and we'll get to that, but I also try to be open to cinema's entire history, recognizing that I struggle with many silent films and early talkies.

My movie viewership  ebbs and flows over the course of a year as holidays, work trips and other obligations can change when I have time to watch movies.


Format in in Which I Watched a Movie

I didn't splinter some of the categories as much as I could have.  Netflix, Amazon Prime and Disney+ all appear here as "Streaming".  I didn't differentiate between DVD and BluRay.  But I think it paints a picture of how I was consuming movies.

That's it for the numbers for 2019.  We'll talk favorites and least-favorites in another post.