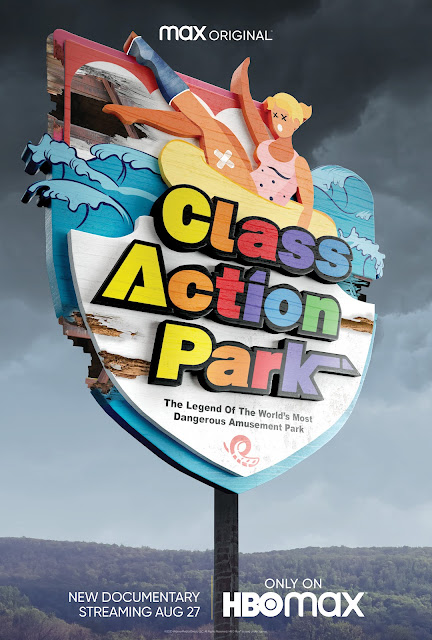 Watched:  03/01/2022
Format:  HBOmax
Viewing:  First
Director:  Seth Porges
In the way of so many documentaries, this one was about 85% of the way there, but I couldn't go with them the last stretch of the film when they try to "make sense of it all".  Class Action Park (2020) is a feature-length doc about the notorious amusement park, Action Park, formerly located outside of New York City that has, since the early 00's, spawned legends of how out of control the place was, and, in fact, dangerous.  Open through the 1980's, the park was one of hundreds, if not thousands, dotting America.
The first half of the film is hysterical as you take a look at the rides and hear tales of how the place was owned and operated by a former penny-stocks Wall Street tycoon banned from the market by the SEC (I think).  He took his Randian concept of personal risk and responsibility as a businessman, applied that to amusement park attendance, and built a two-sided theme park - one side water-based rides like slides and wavepools, and the other being go-karts.  For anyone growing up in the 1980's, you'll see a lot of things you also took part in.  Bumper boats, go-karts, water slides.  But our go-karts at Malibu Grand Prix had speed governors.  Theirs did not.
Read more »
Posted by The League at 3/05/2022 05:35:00 PM No comments: 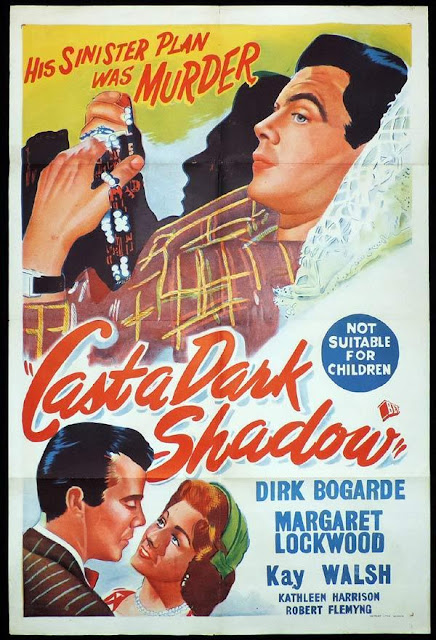 Watched:  02/28/2022
Format:  Noir Alley TCM
Viewing:  First
Decade:  1950's
Director:  Lewis Gilbert
Apparently Cast a Dark Shadow (1955) received poor notices and didn't set the box office on fire upon its release, and I can see how in the mid-50's this thriller would disappear into the background of so much in the way of crime films, mystery, murder and mayhem.
But I dug it.
Starring Dirk Bogarde and Margaret Lockwood, it feels like it never shakes off its roots as a stageplay, and that's not necessarily a bad thing.   The limited number of sets and lack of spectacle keeps the focus on just story and character - which all of the players manage well with their performances and under Gilbert's direction.
Bogarde plays a young man of the working classes who has found himself married to a much older woman whom he decides to bump off for the money.  It's a bit of an elaborate scheme, both what he plans to do to accomplish the lady's demise and what needs to happen after.  But, that accomplished, he sets out to find another older lady to help him get some cash.
Here, he meets Lockwood, and she's worldly and wise in a way no other woman has been.  But she's also not that much older (and looks like Margaret Lockwood), and has her own mind about things.
Bogarde settles in a bit until yet another older woman shows up and seems like easy enough pickings.
Bogarde and Lockwood are individually fantastic in the film, and together it's a fascinating bit of chemistry.  Lockwood's working class girl who married well enough is a great role, and my guess is it's so different (and she's shockingly old at 39 here) from what was happening on screen elsewhere, audiences may have been thrown off.  But she's terrific.  Bogarde gets to go full raving nutter by film's end, and you get to see his range over the course of the film from glances and moments of pause to talking to empty chairs and banging on them with canes.  It's something else.
It's not a movie that will change your life, but it's a terrific, taught thriller.  Check it out.

Watched:  02/26/2022
Format:  Amazon Prime
Viewing:  First
Decade:  1970's
Director:  Arthur Hiller
In high school I saw a college production of Man of La Mancha, and loved the show.  But somehow I never got around to watching the film.  By end of high school, I was familiar with O'Toole and Loren, so that wasn't a deterrent, and even back then, I didn't blink at watching movies from decades past.  I did plan to read Don Quixote on the heels of seeing the play, but never got to it.*  What has shocked me over the years is that the music from the show and the general spirit of a show I saw once at age 17 have stuck with me.
Even if you've never read Cervantes (and I have not) The Man of La Mancha (1972) is absolutely a worthwhile watch.  It's a strange movie, following the show's format, it's a play within a play.  Layer of illusion upon layer of illusion.  Cervantes is an actor performing the play he's written of Man of La Mancha in a town square when the Spanish Inquisition appears and, charging him with heresy, hauls him off to stand trial.  While waiting for his show trial, he cools his heels in a large, open dungeon with a multitude of fellow prisoners who decide to hold their own kangaroo court for him - and in order to explain himself, he sets about using the prisoners to portray a version of his play.
Read more »
Posted by The League at 3/01/2022 11:45:00 PM No comments: 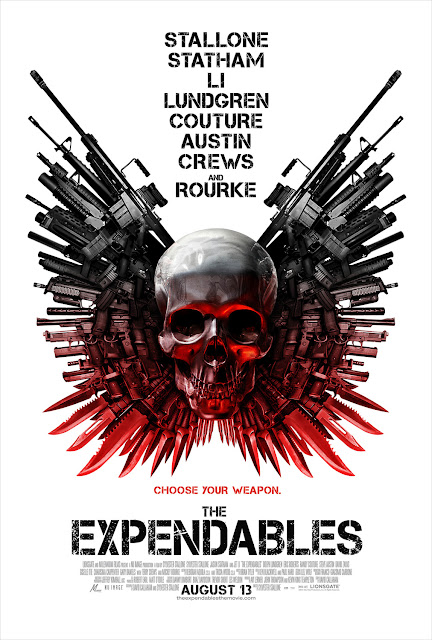 Watched:  02/22/2022
Format:  Amazon Streaming
Viewing: First
Decade: 2010's
Director:  Stallone
For more ways to listen
SimonUK and Ryan relive some glory days by teaming up and trying to recapture the magic of when a man could be a man by blowing up an imaginary Central American country with a drug trade. We talk the melting pot action adventure that crosses multiple decades, revived careers, and firmly believes that Charisma Carpenter should stay off the market on your behalf even if you only check in with her quarterly and won't tell her anything about yourself. But, also, Eric Roberts has a plan that makes literally no sense but seems profitable. Like the My Pillow guy.
The Signal Watch PodCast · 186: "The Expendables" (2010) - w/ SimonUK and Ryan
Music:
Expendables Main Theme - Brian Tyler
SimonUK Cinema
The Signal Watch PodCast · SimonUK Cinema Series
Posted by The League at 2/28/2022 09:09:00 PM No comments:

Watch Party Watch: The Adventures of Buckaroo Banzai Across the Eighth Dimension (1984) 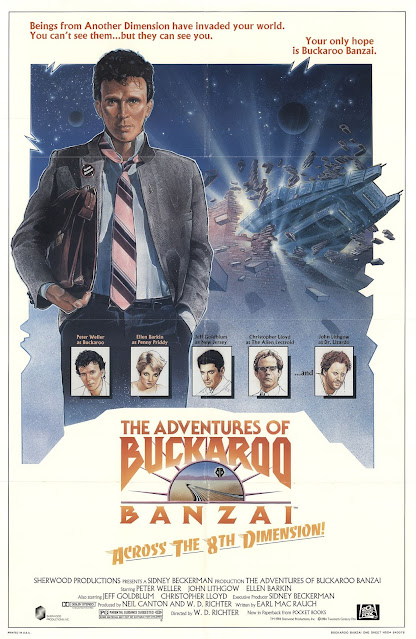 Watched:  02/25/2022
Format:  Amazon Watch Party
Viewing:  Unknown
Director:  W.D. Richter
A first viewing of The Adventures of Buckaroo Banzai Across the Eighth Dimension (1984) is not an easy task, I would assume.
I saw Buckaroo Banzai on its release in the theater thanks to a dad who was not particularly nerdy and didn't care for nerd culture, but had certainly enjoyed serials and whatnot in his youth, and absolutely got what the movie was selling.  And I loved it.  Absolutely was into the movie.  I still love the idea of a team of folks with specialties standing between civilization and chaos.  And I got that the movie was funny and winky.
But I also watched it over and over on cable and recorded on VHS for a bit through middle school.  What I didn't know was that the movie had flopped.  Horribly.  I mean, it made sense that my dad had to drive us across town to the one theater showing the movie, which was mostly empty.  But I also had seen Adventures in Babysitting in a theater so empty of anyone but me and my pals, the manager had come in before the movie to tell us "no monkeyshines", and that's an American classic.
Read more »
Posted by The League at 2/27/2022 12:39:00 PM No comments: