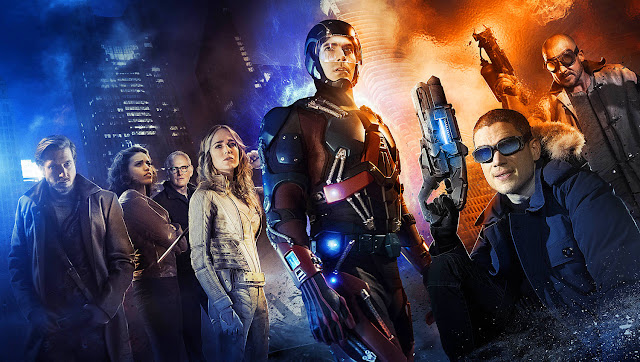 Oh, man.  So many mixed feelings about this show.

Here's what I think:  If I hadn't been reading superhero comics for 30-odd years, this thing would seem fresh as a daisy  Lots of superheroes having an adventure, living a little, learning a little, comparing and contrasting themselves, speaking entirely in exposition.  It genuinely has the pacing and plotless weaving of a real DC Comics crossover event comic, complete with all the clunky dialog and trying to do too much with too many characters in too little time, and you kind of stick it out through the parts that don't work (which are many), because when it does work, it's a lot of fun.  And, it may actually "count", depending on how well received the thing winds up.

Our Valued Customers: The End is Nigh

On Monday, one of the longest running and one of the best online comics out there, Our Valued Customers, announced that the curtain will be coming down.  If you follow one of my more modern social media outlets - say, fb or tumblr, you've likely seen me link to the strips on a very routine basis.


The one-panel comic was about those of us who wander the aisles of our local comic booke shoppes, but the humor was always universal.  The set-up of the strip is a caricature of a real person saying a real thing overheard by the folks working the register.  And, having spent time in many-a-comic shop, it all rang exceedingly true.  I believe he's got a network of other comics retailers sending him heir best stuff, but I don't know exactly how this works.  Just that it does.

As folks who are regular visitors to the site may have gleaned, I don't take any particular pleasure in disliking things which are either popular by mass appeal or critical consensus.  For example, the entire thrust of my discussion of The Revenant was really about how I thought it was a good movie, but maybe not a great movie.  And how I figured this meant I'd spend the next six months trying to decide if I needed to be polite in mixed company, or if I'd just be "that guy" and make noise about my opinion.

A few days ago, an old high school pal, JoeC, started asking folks on facebook about what bands people hated that folks seemed to really dig.  You could say why, and some folks did.

Today he asked folks about what movies people hated that had popular or critical acclaim.  He volunteered his own answers and gave some great explanations why - some were logical, some visceral - and then invited others to join in.

I am afraid I came off as a pretentious jerkface for bitching about Whit Stillman, but, man, I cannot stand that dude's work.

I love the idea of us all working through our cognitive dissonance together.  So, I'm going to ask the same thing Joe asked:

What movie do you hate that seems to get all the kudos, laud & honor - and you think it's just terrible?


My Sophomore year of high school I had participated in some stuff in the drama department at my high school.  By the end of the year they were doing the Spring musical, which, that year, was Bye Bye Birdie.  As I'm not a single-threat, let alone a triple one, I wasn't planning to participate.  But, as I am extremely good at happening to be just standing there, someone came by and grabbed me to work crew on the show.  And, because I believed there was no "I" in "team", I somehow wound up as the guy in the "fly booth".  Which is a small box above the stage with a few cranks where I'd wrangle the signs, "flying" them in and out of view of the stage.

So, for three showings of Bye Bye Birdie in the Spring of 1991 (and lord knows how many rehearsals) I sat in a black box thirty-something feet above the stage and pondered the imponderables of high school while my classmates danced, sang and "acted" their way to glory.*

Consequently, I know the play of Bye Bye Birdie fairly well.  Or did, I guess.  And, for a while, I was really over my fear of heights.

I think I've seen the movie version before, but it was a long time ago, and, frankly, I didn't remember it at all.  I've also seen part of a televised newish version, but I doubt we made it very far through that one.

Whether you get around to reading my comments below or not, it's probably worth looking at this article in The Atlantic.  This is a fairly serious and well respected news and opinion source, and it's calling out DC Comics/ Entertainment for their poor handling of Superman in the past few decades.  A topic near and dear to my heart.

I was awake and moving for all of 30 minutes Sunday morning before I looked at my phone and saw my brother sent the link to the story.  Honestly, I kind of rolled my eyes at the headline.  The past twenty or more years have been full of articles in places, both reputable and otherwise, writing about how and why Superman was no longer relevant.  Too goody-goody.  Not po-mo or meta enough.  Not "edgy" enough for today's gnarly kids and their totally radical view of bad-ass-dom. 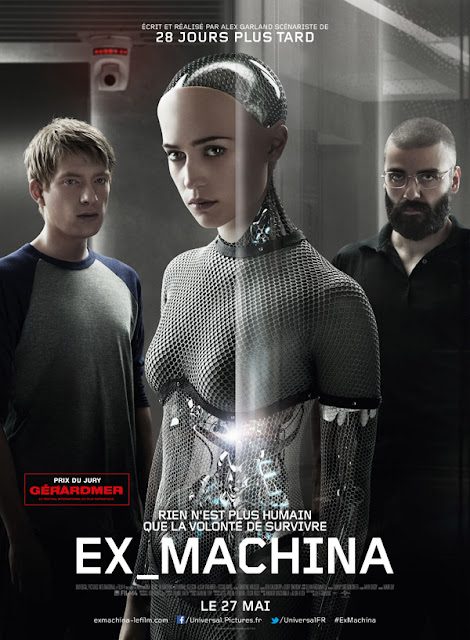 So, I think Randy has asked me no less than 3200 times if I'd seen Ex Machina (2015) yet.  Really I have no idea why this movie made him think of me in particular.  And I say that without the usual first paragraph snark.  I guess because I like robots.  He'll have to show up in the comments and explain his reasoning.

I finally decided to check out the movie, mostly to see Oscar Isaac in something where he wasn't Llewyn Davis or a space fighter pilot, and, yes, he's every bit as good here as you may have heard, and we're nowhere close to seeing everything he can do.  I'm really hoping the scripts come his way that can make the most of him and not let him turn into some weird Al Pacino-like parody of a self of him we've not yet seen ossified.

If I hadn't rushed out to see the movie, it was one of those times I looked at a trailer, identified a few plot points and filled in the rest, and was okay with whether or not I'd ever see the film. "Female Automoton Is Objectified, Gets Angry, is Metaphor?" was what I pulled out of the ads I'd seen.  And, truthfully, the movie itself was, more or less exactly what I expected it to be, plot-wise and narratively, but - and I want to be very clear on this - because I think my meaning was misconstrued with the Revenant write-up - if you were going to make that movie, this was as good as that particular movie was going to get.  That's not a knock, that's a "this is where I am as a movie-goer who has absorbed a lot of stories in 40 years on this spinning rock."