We're rolling into the final three issues of the current Supergirl series with current continuity and current costume I've never been crazy about (but I like the new one okay).  No matter how good or bad, its obvious this story is filler, but that doesn't mean we can't enjoy what the creative team is trying to do.

This is the first issue for writer Kelly Sue DeConnick that I've read, but if you've been kicking around comics, likely you've see the work by ChrisCross elsewhere.

"Troll Hunter" is a sort of adorable version of "Blair Witch"

When The Blair Witch Project debuted back in 1999, its not like people suddenly thought "oh, @#$%!  Witches are real!"  But the effect of the movie on a population of people who'd grown up slinging handy cams had a pretty intense effect.  Flashforward 12 years, a flopped sequel, innumerable knock-offs (Cloverfield, etc...) and a cottage industry of "reality" shows about people hunting ghosts in modestly aged homes, and....  anyway.

So, okay.  Before I am accused of saying that Green Lantern is a good movie, just understand, we're not saying that.  But let's do a few things here.

1)  The fact that Green Lantern scored a 20% at Rottentomatoes is a pretty good acknowledgement that 4 of 5 people gave this movie an unfavorable review.  That doesn't mean they were wretching their guts out, but 80% of people who care enough about movies to write about them can all agree that, yeah, that could have been way better.  So lets get a handle on what that rating means.
2)  As someone who consumes a whole lotta superhero media, there are different scales of badness out there, and this movie is nowhere near, say, the un-aired JLA pilot in terms of being just unforgivebly bad.  As someone who has seen Santa with Muscles and watched Manos: The Hands of Fate three times, I will tell you when you've achieved true awfulness.
3)  I don't know if people had high expectations for this movie or not, but there's a giddiness out there in the zeitgeist about wanting to dogpile on this movie that, and I'm not just saying this as a fan of the comics, but just from a movie-go'er's perspective, I'm not sure it deserves.
4)  The Green lantern mythology is somewhat convoluted even over 50-odd years of comics.  Cramming it into a movie was always going to be a trick.
5)  The CGI is actually quite good in this movie.  I don't know why it looked half-baked on TV and online.  But its pretty amazing, actually, in many parts of the movie.
6)  I can't imagine that 20-odd years of reading GL on an off hasn't given me something of a leg-up on understanding what the hell was going on.  So now you people know how I've felt in the last few Harry Potter movies.

This is not a review of the Green Lantern movie. I'm seeing that on Friday (today) at 4:15. Its supposedly horrid.

The film inherits character and set design from the feature cartoon Green Lantern: First Flight, a movie we discussed back at League of Melbotis, Volume 1.  Not all of the voice talent returns, and I have to say that I think the set design and illustrative quality is just much, much better this go-round.  And I'll get to that.

Emerald Knights follows in the tradition of the old over-sized Green Lantern Corps issues that would include short story back-ups, which used the fact that the Corps were 3600 strong, somewhat fungible and absolutely expendable to tell all kinds of stories from the tragic to the sublime.  If DC had a secret outlet for writers to try the sort of writing that happens in sci-fi anthologies or episodes of sci-fi shows like The Twilight Zone or Outer Limits that rely on a single episode to tell the story, it was in exploring different story matter than "Hal Jordan and friends save the day", and the pay off was that these back-up stories are better remembered today than what was actually happening in the main stories at the time.  And it gave a home to people like Alan Moore as he kicked around the DCU for a bit.

This is going to become one of those dorm room poster things, isn't it? 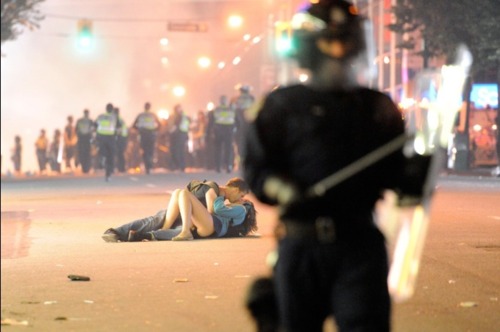 Apparently this is a completely unstaged photo that was taken during the riot in Vancouver after Bruins beat Vancouver for the Stanley Cup. In fact, the photographer didn't even know what he had until his editor showed him the picture.

You Canadians. You can't even riot without it turning into something sweet.

Email ThisBlogThis!Share to TwitterShare to FacebookShare to Pinterest
Labels: news

So, it looks like the Green Lantern movie is going to be just godawful

As of this moment, Green Lantern is tracking at 20% at Rottentomatoes.

It looks like Greg Lantern is going to be a huge hit!

This may explain some of the issues this movie is having with reviewers. Box office is not going to be pretty.

Dealing with the truth, journalistic integrity and the world of "choose your own reality"

yesterday I stumbled across a pair of articles that I thought intersected nicely.

First, I came across this article on The Backfire Effect.  I suggest you read it, its food for thought.  The core idea of the article is that presenting conflicting evidence to folks with a belief based upon faulty evidence, heresay, rumor, faith, conspiracy, etc...  doesn't convince the believer otherwise.  It merely reinforces that belief.

This shouldn't be a shock to anyone who has had the pleasure of hanging out with a conspiracy theorist.  Suggesting that 9/11 was not an inside job just makes you a sucker, fool and a patsy (or, in a worst case scenario, ONE OF THEM).  But it doesn't need to be the case that one bring up something as inflammatory as 9/11 conspiracies or as ridiculous as Hitler-UFO-JFK conspiracy theories.  Our everyday politics hinge on this entrenching of our beliefs.

Surely it can't be that all conservative beliefs are statistically and factually correct while all opposing liberal beliefs are wrong.  And surely it cannot be that all liberal beliefs are statistically and factually correct while all conservative beliefs are wrong.  Its not even a question of a "happy medium" somewhere between the two.  Occasionally, someone is going to be wrong.  One policy is going to reduce teen pregnancy and one is not, and statistics can help us figure this stuff out (anecdotes, while moving, are not hugely useful).

I know that I have knee-jerk reactions to all sorts of things.  The article points out that this seemingly innate desire to argue and fight over what we already "know" or are comfortable "knowing" is essentially part of human nature, and our responses likely have their roots in evolutionary biology (see: something I'll readily accept because I don't find the idea that we're fancy apes at all offensive).  But tell me that we've got all kinds of fossil fuel in shale, and I'll raise a skeptical eyebrow and quote you science I vaguely remember from middle school ( I honestly haven't read up on this issue very much).

Let's Do This: The DCNu September Solicitations and a Final Guess/ Checklist

So DC released its complete September solicitations.  No mention of the JSA, Captain Marvel, etc...   Let's take a final tally of the Nu52. This is after seeing actual creative teams and getting a better feel for what DC was doing.

By the way, I don't actually expect that this is it from DC.  By November, I'd expect we'll see more titles from DC, but 52 new titles is likely plenty for today.

I think its worth mentioning that at one point in the comics, the X-Men battled a villain named Count Nefaria.  And maybe that's who the villain should have been in X-Men: First Class, because, goodness, that Kevin Bacon was most certainly a bad guy.

I was a huge (HUGE) X-fan for a good stretch of my adolescence, and you can probably blame quite a bit of my comics fandom on Uncanny X-Men #210, which was the first time I read and re-read and re-read a comic like that.  And it taught me to buy back-issues, which is why I have a run of Uncanny that extends from issue 168 straight to 330 or so before I miss an issue.*  Looking at release dates, that's about a decade of straight X-Men reading between 210 and 330, and quite a bit of back-issue buying I did, and it represents a pretty good chunk of a young person's life, from age 11 to 21.

But when I parted ways with X-Men, we'd significantly grown apart.  X-Men had become more a book about oddly drawn characters with lots of pockets and enormous weaponry than a book about mutants protecting the very humans who hated and feared them.

Superman's new costume gets attention outside of geek circles

DC Comics' upcoming costume change for Superman is starting to get some media attention. Go figure. 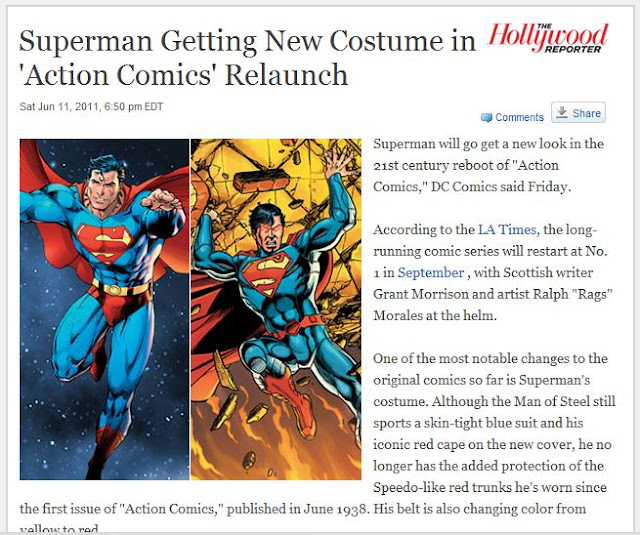