There are many kinds of people in this world and these different people have different sets of tastes.  There are also many kinds of stories in this world, and many ways of telling stories.  Mass media, especially television and its model of "who is watching now (and please don't skip the ads)" doesn't deal with either of these facts particularly well.

I am a fan of the Wonder Woman character (albeit, not as big a fan as some).  I am not a fan of much of the work of David E. Kelley, most famous for his role as the creator of Ally McBeal, but also creator of Boston Legal, Snoops, Girls Club, Boston Public, The Wedding Bells and a dozen other projects.  I will confess that I liked Lake Placid.  I always like movies about giant alligators.


With each passing issue, you can only hope that DC realizes what they've got on their hands with Chris Roberson's Superman. I am certain editors Idleson and Moss know, and I can only cross my fingers and hope that after this Grounded storyline is in the rearview mirror, they have plans to let Roberson bring his magic back to Metropolis.

Friday is the final episode of TV's Smallville.

What does one say about a show that's been on the air so long?  That's about 220 episodes of Superman-related broadcasts (and without commercials, I'd guess about 170 hours of Superman-ish material).  Moreover, what does one say when they are a die-hard Superman fan who has watched the program out of a mis-placed sense of obligation and stuck with it just to see it through to the end, like a pet goldfish you know is on his last legs so you need to keep feeding it...?

In truth, the show became so bad it, at some point it became hilarious.  Watching week after week, you can see that the production team simply could not get their @#$% right, no matter how hard they tried.  It's adorable, and it became part of why I tuned in: to see just exactly how this was going to go wrong this week.

Not a ringing endorsement, but it takes on a life of its own.* 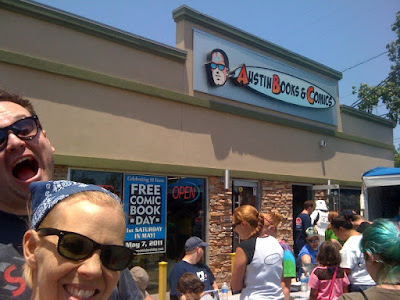 I thought I was photo-bombing a pic of Jamie, but Jason was actually just trying to get the front of the store and Jamie was just standing there.

There are going to be plenty of straight-up reviews out there of the first really big offering of the Summer Movie Season, so I'll spare you an attempt at all that.

1) Like many Marvel movies, I've only a cursory knowledge of Thor as he exists in comics. As a kid, the character just didn't work for me at all (I thought the same thing about Superman, so, natch), and never really grew interested in Thor. I'm not much of a swords'n'sorcery guy, and I just wasn't interested in the mix of faux-Shakespearean dialect and modern interpretation of myth. I would look at Thor in Avengers, and he always seemed oddly out of place, like seeing Chewbacca show up in an X-Files episode because it's all sci-fi.

2) I think my Kirby-adoration has given me a better understanding of Thor these days, and I've spoken some with CanadianSimon about Thor, and, frankly, I am trying to free up my budget to get my hands on some of the Walt Simonson Thor. It just sounds too good.

Happy Mother's Day to the Moms out there! This Mother's Day my own mom is in Kenya wrestling lions or something, and Jamie's mom is in Trinidad and Tobago. So, no formal Mother's Day business for us.

But, hey... I assume somebody out there who reads this might be a mom. So, you know, we tip our hat. Its the hardest job out there, and there's not a lot of room for screwing up.

From our friends in Pink Floyd:

From our friend Glen:

Hey! Today was Free Comic Book Day all 'round the world!

As has become tradition, Jason, Jamie and I headed down to Austin Books and Comics to see what was going down.

The line wrapped around the building from about 8:00 AM until sometime into the very late afternoon.

Jamie is a sport. I don't know that she actually likes FCBD too much, but she goes pretty much every year.