Happy 30th Anniversary to "Star Trek: The Next Generation" 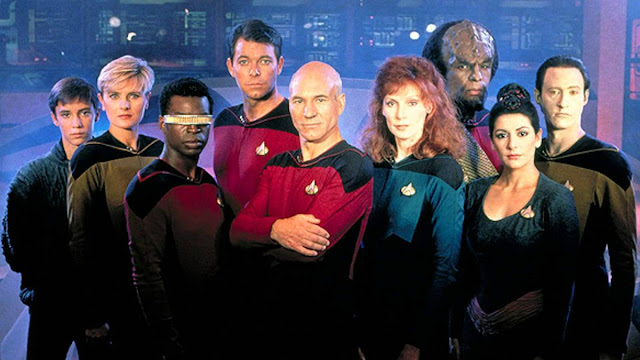 Happy 30th Anniversary to Star Trek: The Next Generation!

First of all, I wasn't looking forward to a reboot of Star Trek when this show aired.  I sort of thought of Star Trek as Kirk and his pals cruising around space in their cool car, getting into scrapes.  This was not going to be that.

Boy howdy, do I remember being 12 and showing up at school the next day and me and my fellow nerd friends standing around trying to make heads or tails of what we'd just watched.  We knew we liked Data, Riker, Tasha Yar and Geordi.  But what was up with that kid?  And why wasn't the Klingon phasering and stabbing everything in sight?  And, of course, the notion of Counselor Troi was a lot for a 12 year old to get their head around.  And why was the Captain not a brash, emotional young man?  He seemed so old...  (he was, of course, only about 47, just a few years older than I am now).

But eventually I got sucked in, and by the time I got to college, one of the few posters I brought with me for my dorm room wall was a poster-sized portrait of Captain Picard that I woke up to every morning.

Mostly I watched the show in nightly reruns in syndication, catching them out of order in a way that TV could never withstand today.  And, since I was living with other people during college, if I didn't catch a reference to something from a prior episode or Star Trek mythology, often someone could fill in a gap who had seen those episodes.

Man, we *all* watched this show back then.  Where watching the original series still carried the whiff of nerdiness to it, the seeming omnipresence of ST:TNG made it kind of okay, and while not everyone was super into the mythology, people mostly knew who the cast were and whatnot.

The show can be intensely uneven, everyone has things they like about it and things they don't just because of the sheer sprawl of the cast and show (I have mixed feelings about the holodeck stuff).  But the good outweighed the bad to a massive degree.

I can intellectualize issues with the show, and while I continue to watch the show from time to time, I've never returned to it in any systematic way.  Mostly I'll catch an episode or two on BBC or streaming.  But, yeah, I still enjoy it quite a bit, even if its a clunker of an episode (but what do you want?  They had around 180 episodes.  Not everything is going to be gold.).

The show underwent a lot of changes over the years, with cast coming and going, plot threads and characters continuing, growing, changing, revealing themselves in episodic bits.  The Trek universe expanded into new edges of the universe and contracted (lots of guest appearances by TOS cast members).

Some of you may have enjoyed Star Trek: The Experience in Vegas, and if you did not, I'm very sorry.  But in addition to a recreation of Quark's from DS9, the experience also included a recreation of the bridge of the NCC-1701D, down to the last detail.  And not a person who found themself on that bridge did get something of a shiver.

Hugh Hefner Has Merged With The Infinite 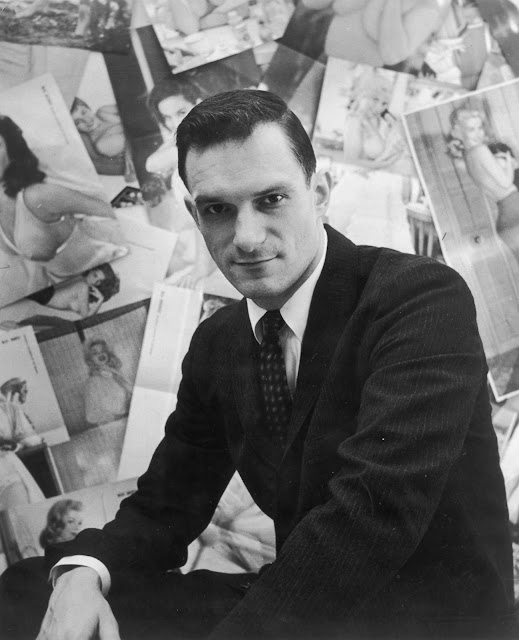 Really, if anyone was living their best life, it's hard to imagine a more straightforward vision pursued and achieved (at a simply mind-boggling level) than America's least repentant swingin' daddio, Hugh Hefner.


I've mostly lived in the era of "Fun Uncle" and "Kindly Grandpa" Hef, the Playboy Clubs a relic of prior generations by the time I learned about them.  The magazine has always been around, but I've only ever bought one issue, and that was for someone else because I was feeling daffy.  The era of Playboy journalism getting scoops, publishing name writers, etc.. was still in play in the 1980's, but fading.  Mostly I remember the ads they ran on TV selling subscriptions to Playboy, and, of course, the forbidden stack of Playboy Magazines a few neighborhood dads or older brothers would have, which I never, ever would have stolen a peek at.  Nope.

But by high school (the early 90's), even chumps like me were aware that Playboy was less pornography (and I still roll my eyes at people who categorize it as such, but it also isn't for the whole family) and more of a lifestyle magazine for people who at least wanted to believe they were living it up.  And boobs.  Lots of boobs.  And butts.  And, Hef guessed correctly. That was a popular formula.

You're not supposed to say Hugh Hefner provided an invaluable service to America in a pre-internet era, but he kind of did.  For our more sensitive readers, we'll leave it there. But he also provided a view of the world in which embracing a sex-positive stance (albeit, a deeply problematic one) could get some traction.  And, he got Jimmy Carter to say some pretty funny shit.

It was always amazing to know the Playboy mansion was out there, and this average-looking guy had a "private grotto" attached to his pool. It was all so cartoonish, it just felt like a giant ad for the magazine, and I guess it was.  Sure, I'm sure Hef enjoyed it all, but it was work, too.

But it is true that the Playboy model has struggled since the mid-90's with the rise of the internet splitting up the varying interests contained in the magazine.  By the early 00's, Playboy seemed more successful as a brand or license than as a magazine.  They're still struggling to find a model that works that people will pay for, but that's other people's problem now and has been for decades.  Hef got to just stay in pajamas and hang out at his mansion all day.

I dunno.  You did a really remarkable and weird thing, Hef.  And I am sure your regrets are both vast and beyond the imaginings of any man.  But you did okay, too.  We're gonna miss you.

The Pleasure and Pain of a New Star Trek Series

I am going to be blunt with you people.

Since late college, I've liked Star Trek more in theory than in practice.  The last Star Trek movie I remember enjoying on its own merits was The Undiscovered Country, and possibly First Contact.

Admittedly, my exposure to Deep Space 9 was deeply hampered by the fact it ran while I was in college in the 90's (and often cash-poor) so I had a lack of things like:  television, cable, free time and Saturday afternoons, which is when I think the show aired in Austin.  Voyager I tried on, but literally disliked everyone but Janeway - and a recent attempt to watch the series again bore that out.  An attempt to watch Enterprise was hampered by a terrible theme song, pandering cat-suited Vulcans and a fairly bland kick-off that I never got into.  But I liked Captain Archer, so, I dunno.  By the time I looped back to try and watch it ("it got good!" people told me), it was canceled.

The new movies have only occasionally even remembered that they're Star Trek, failed to go on any missions, and while I genuinely liked the most recent one, the plot was weirdly inconsequential and could easily be forgotten if they skipped to a movie where they (a) actually went space exploring and (b) didn't destroy the Enterprise again.