FRIDAY: Amazon Watch Party - "The House That Dripped Blood" (1970) - an anthology of FRIGHTS 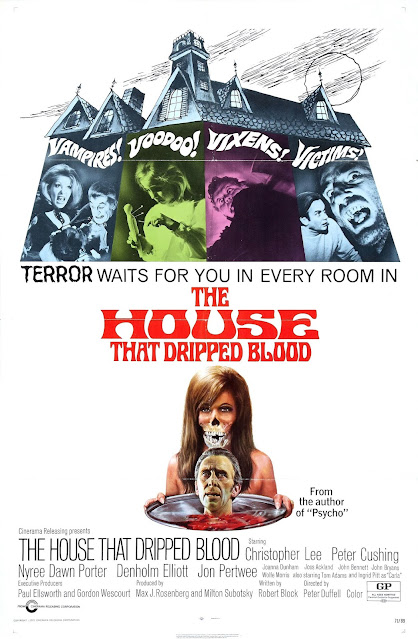 LINK HERE
We've been threatening y'all with this movie for a while now, and it's time to deliver.
No other genre does the "anthology" quite the way horror film embraces the concept.  The House That Dripped Blood is a collection of short stories all around a single house in the suburbs that contains TERROR in many forms and guises.
The movie has some big names in it - Cushing, Lee, Denholm Elliot.  But it also gives me a chance to share the great Ingrid Pitt with you people.
It's not Hammer - it's their poor relation, Amicus Productions.  But it's still a perfect bit of horror for a night as we head toward Halloween!
Posted by The League at 10/23/2020 08:05:00 PM No comments: 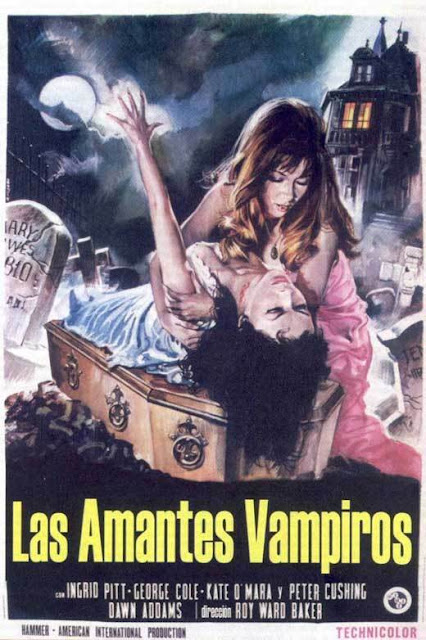 Watched:  10/21/2020
Format:  BluRay
Viewing:  Third
Decade:  1970's
Director:  Roy Ward Baker
A few years ago I included The Vampire Lovers (1970) in my list of one of the best movies I'd watched that year, but I don't think I'd actually watched it again since.  Maybe in bits on cable, but this year I've been saving another rewatch for Halloween-season.   The last few Octobers were obnoxiously busy times for me (in no small part because of baseball, but the Cubs were very bad this year).  But, last year I squeezed in a listen to the audiobook of the source material, the novella Carmilla.  (I should mention, the novella predates Dracula by about 15 years).
Read more »
Posted by The League at 10/23/2020 12:32:00 PM No comments:

We get wrapped up in some positively ancient horror favorites; two takes on the ancient dudes coming back and causing a lot of problems for colonial pillagers of ancient burial sites! First up is the weirdly undiscussed 1932 Universal feature starring Boris Karloff as a former clergyman who would do anything for love, then we talk the 1959 version starring Christopher Lee in a similar role - but this time opposite Peter Cushing. We'll walk a Nile in their shoes as we dig deep and discuss two horror classics!
The Signal Watch PodCast · 124: "The Mummy" (1932) & (1959) - Halloween 2020 w/ SimonUK & Ryan

Today is the birthday of Carrie Fisher 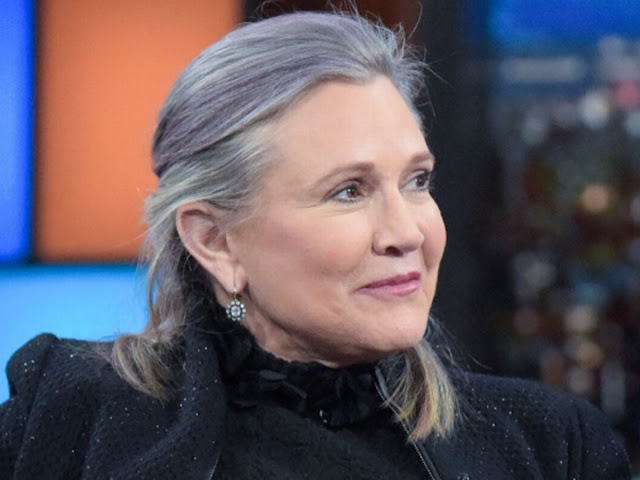 all hail The General 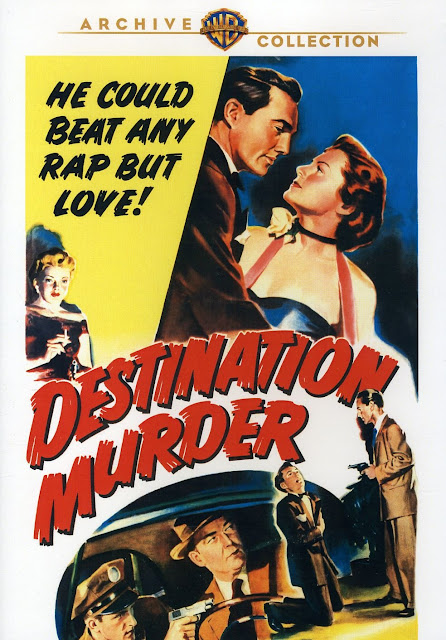 Watched:  10/21/2020
Format:  Noir Alley on TCM
Viewing:  First
Decade:  1950's
Director:  Edward L. Cahn
Shown on Noir Alley, Eddie Muller set the stage perfectly - Destination Murder (1950) is not going to fool anyone into thinking they're watching an A picture, but it is a wild ride of a film with a lot of character and more twists than a bag of pretzels.
Laura Mansfield (Joyce MacKenzie) has come home from college on the east coast when her father opens the door for a seeming delivery man and takes a fatal bullet.  The cops seem to be stumbling, so Laura takes it upon herself to do some snooping.  Unfortunately, all of the delivery drivers in their line-up had alibis, but Laura fakes trust in her most likely suspect, and that opens a door into the underworld of the city, all based around The Vogue nightclub.
Cast includes most recognizably Stanley Clements as the delivery man and assassin, Albert Dekker as the boss of the nightclub, Hurd Hatfield as the brains and manager of the nightclub, and Myrna Dell as a competing femme fatale.
For the first thirty minutes, it feels like a standard B-picture, and then the twists start coming hard and fast.  Some are jaw-droppers, some are "say what?" moments, but all of it does fit into the logic of the movie.  And, anchored by the solid delivery by Joyce MacKenzie, it's all a bit crazy but just works.  That said - no one will be in a rush to nominate anyone here for an Oscar.
Highly recommended in a "well, that was crazy!" kind of way.
Posted by The League at 10/21/2020 11:40:00 AM No comments: 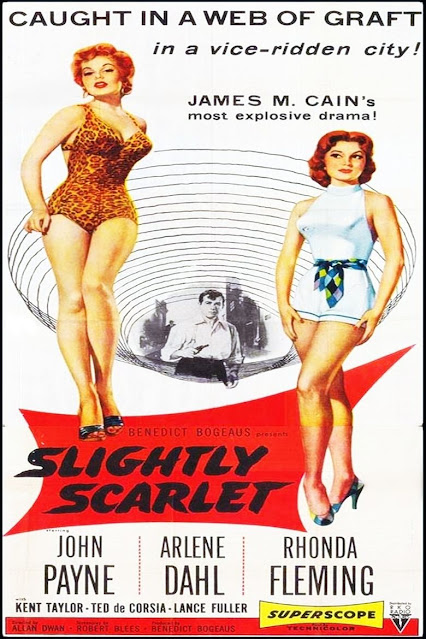 This week's Tuesday selection by Jenifer was Slightly Scarlet (1956), an RKO noir picture that seemed to have all the hallmarks of an RKO crime picture, and - starring the late Rhonda Fleming - was released in technicolor.  Jenifer no doubt selected the film because Fleming passed just last week on the 14th, and it seemed like a good way to remember the red-head bombshell, known as "Queen of Technicolor".*
Shot by John Alton, one of the now-most-famous noir DP's, it's wild to see a noir of this period in color, and one that was still being lit like all we were working with was gray tone and black and white.  Even if the story of the film doesn't grab you, it's interesting enough just to see how the rules for how these movies would be shot that had been brewing for a decade works and doesn't work once your subjects are in living color.
The story is James M. Cain, who gave us Mildred Pierce and The Postman Always Rings Twice, so you know it's family melodrama mixed with MURDER.
Fleming plays a career-gal who has just landed the next mayor of her California coastal city (the fictional Bay City) as her beau.  She's picking up her sister from jail, a troubled young woman with a bent psyche.  But along comes John Payne - an educated fellow playing dirty in the rackets and has an eye on the Big Man's chair (Ted De Corsia).
Payne romances Fleming, the sister - who becomes increasingly unhinged out of her prison environs - decides she wants her some John Payne, and city politics mix with mob corruption.
All in all, a tight noir plot.  Aside from color, the stand-out difference is really Arlene Dahl's portrayal of the troubled sister, who would be winding up in a Mental Health Court these days, and how treatment and support of family (even as Dahl is blaming Fleming for her state) is everything.  It does lean into "there's a specific event that caused this" psychology of the time, at least as far as movies are concerned - and it is lifted wholesale from 1946's The Locket - but it's still an interesting twist to not just write off the sister as twisted or evil.
Also - a harpoon gun is deployed!
I think I did a phenomenal job of not acting like a Tex Avery wolf cartoon when Fleming was on screen - and the movie (in classic RKO noir fashion) - was certainly going for production value.  I can't tell if this was part of the Howard Hughes era of the studio - certainly it has the feel of something he would have had his hands on, from Fleming's wardrobe, to Arlene Dahl's personal line of negligee playing a featured role, and fight scenes that feel a little bone-crunchy.  My suspicion is: yes.  But I'm not sure when Hughes' grip on RKO slipped, and it would have been around this period.  But, man, that poster looks like something Hughes would have insisted on.
*it's hard to say the impact red-heads had on Technicolor and it had on red-heads.  I know Maureen O'Hara was also considered a highlight of Technicolor film.
Posted by The League at 10/21/2020 11:16:00 AM No comments: