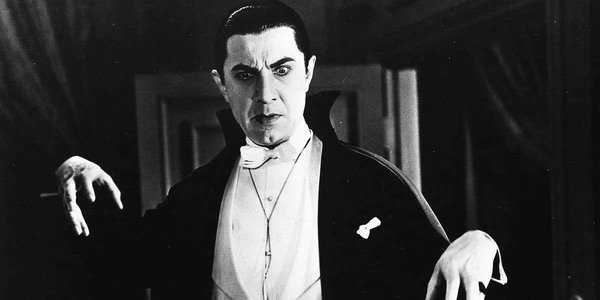 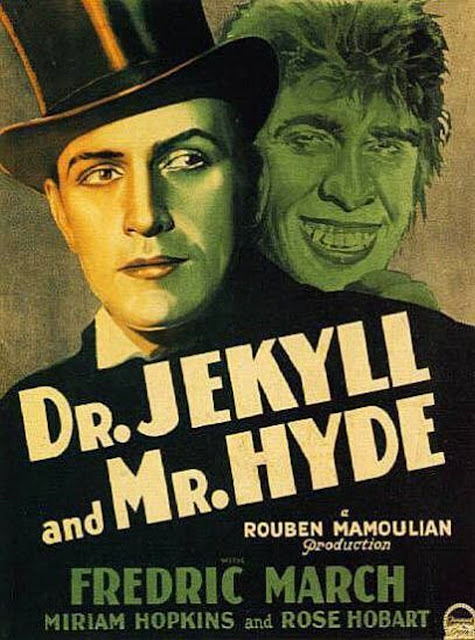 Watched:  10/01/2021
Format:  TCM
Viewing:  Unknown.  Third?
Decade:  1930's
Director:  Rouben Mamoulian
Because this movie was released via Paramount versus Universal, it hasn't quite got the same visibility as the Universal Horror films over the past 90 years.  You don't see Hyde cavorting with Creatch or Drac.  He's a bad fit if Frankenstein or the Wolfman are looking for a scrap.  But he's still crucial to the movement of horror films, pushing special effects and getting top performances out of the cast (and it looks AMAZING.  The sets in this thing...).
Based upon a novella by Robert Louis Stevenson, Paramount took the production seriously, and it wound up nominated for Academy Awards, and March took home the statue for Best Actor.  And - I'll argue - he deserves it.  And he film deserves accolades for design and effects alongside the Universal films, even if nothing about this movie goes in for gigantic gothic sets.  Plus, there's some fascinating POV work in the film, putting us in Jekyll's place seemingly to make a point.
Read more »
Posted by The League at 10/02/2021 03:38:00 PM No comments: 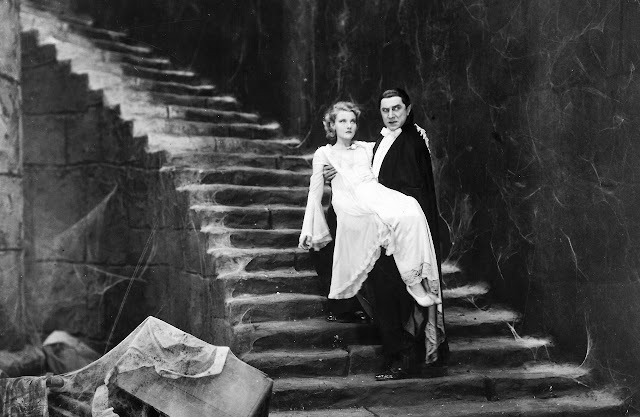 This Friday we kick off our Universal Monsters Hallow-Scream Watch Party
Join us as we watch one of the movies that launched a movement!  It's not the first, or even the best, but it's certainly one that was a MONSTER hit and solidified Dracula as a pop culture figure for a century to come.
Come find out what movies, plays, cartoons and candy mascots have been ripping off for 90 years!  Behold:  spooky armadillos, rubber bats, boring virgins, terrific cinematography and Dwight Frye just freaking out the squares.
Day:  Friday, October 1
Time:  8:30 Central, 6:30 Pacific
Format:  Amazon Watch Party
Cost:  $4.00
LINK HERE TO JOIN US
Our Schedule:
8:30 PM Central/ 6:30 Pacific for all shows!
October 1 -   Dracula (1931)
October  8 -  Frankenstein (1932)
October 15 - Bride of Frankenstein (1935)
October 22 - The Wolfman (1941)
October 29 - Creature from the Black Lagoon (1954)
Unrelated:  Horror podcast episodes!
The Universal Monsters Hallow-Scream Watch Party series is meant to be a casual good-time as we check out the run of horror movies that started with Dracula and have become staples of culture the world over!  Everyone knows what these monsters look and act like, but it's probable most people haven't ever actually seen the movies they're in!  So, come watch!
Starting just two years after the silent era, these movies quickly became the blockbusters of their day, bringing strange ideas most people hadn't considered, wild visuals, and complicated creatures to the screen.  And, ever since, studios have been looking to recapture this particular lightning in a bottle.
We think you'll enjoy watching along and checking out the creepfest that is Universal Horror! 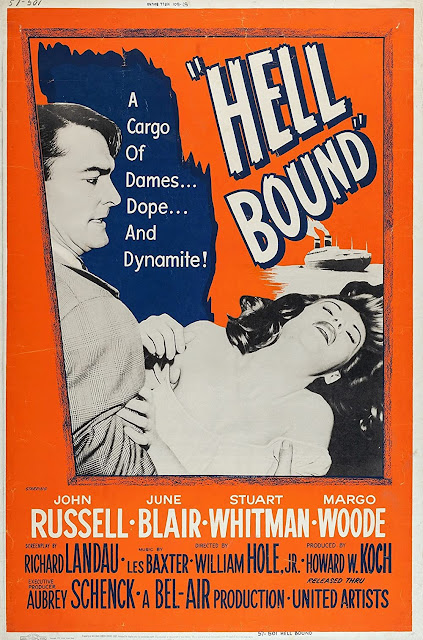 Watched:  09/30/2021
Format:  Noir Alley on TCM
Viewing:  First
Decade:  1950's
Director:  William J. Hole  Jr. (what a name)
Confession - I sort of 3/4ths watched Hell Bound (1957).  I watched it from beginning to end, but was checking email and whatnot.
It's a low-budget/ poverty-rowish crime caper, complete with post-Naked City heavy-handed voice-over in a bizarre film-within-a-film conceit.  It's a heist picture, and I genuinely wish I'd paid more attention (and will rewatch at some point), as this one does a surprisingly good job of setting up "here's how the heist will go" and "here's how none of those carefully planned steps worked out" as the characters pursue their own vices and agendas.  Classic heist stuff.
In some ways, heist pictures and books speak to me as a Project Manager.  It's a funky angle, but there's always a plan you're supposed to be sticking to, and then the job becomes about wrangling cats and dealing with unforeseen complications.  You can plan, but God laughs, etc...
You're mostly not going to know the talent.  There's a "that guy" I think I know from Dark Passage, but everyone else was a bit of a mystery.  The movie does give a role to Miss January 1957, and she's good!  She went on to a long career (and married one of Ozzie Nelson's kids for a while).
Mostly - it's got some great street-level photography of Los Angeles, some of it probably shot guerilla style.  But especially the back 1/3rd has some memorable stuff as our lead antagonist runs like hell through industrial ports and junk yard (seeing the stacked street cars waiting to be scrapped is a punishing image).
Anyway - I'll definitely rewatch at some point.
Posted by The League at 9/30/2021 11:51:00 AM No comments:

Polygon recently ran an oral history of the New 52 effort from DC Comics.  It features then DC Co-Publisher, Dan Didio, as well as a number of writers from the era.  It's a fascinating article for a lot of reasons, in part because of what those interviewed considered success and good ideas, and it seems that at least one person seems to have some difficulty separating fact from fiction on a few points.
A lot of talent - writers, artists and editors - seem to have turned down Polygon's request for an interview, some even citing that working on the New 52/ Nu52 was so unpleasant, they'd rather not talk about it.  So the number of voices that you'll see represented are minimal and probably well insulated from being seen as "difficult" or "willing to talk" by the current folks in charge.  After all, it's a tiny industry, and speaking out of turn even about deposed rulers can still label you as a problem.
In my opinion, reading the article, it's shocking how little self-reflection has occurred and how little awareness at least Dan Didio has about how it all ended - eg: being shown the door in early 2020 - just as he was gearing up to do a redux of New 52 and literally needed to be stopped.
Well, here's my history of DC's  New 52 publishing adventure as I remember it.
Read more »
Posted by The League at 9/30/2021 02:25:00 AM 2 comments:

Watched:  09/29/2021
Format:  Amazon
Viewing:  First
Decade:  1980's
Director:  Brian DePalma
I have two memories of Body Double (1984) existing, although this was the first time I'd seen the film.
1.  This movie was always on the shelf at every video store and had a sorta naked lady on the cover, sporting at least slightly less clothes than a Sears underwear ad.  It's ubiquity was part of my growing recognition that grown-ups did go and see movies with skin in them that were about sexiness - and that did not equal "porn".  So, I guess this cover was part of my realization that genre included the "erotic thriller" alongside slasher flicks and Rated-R comedies.
2.  In high school I read American Psycho, which was not on the reading list.  I'm in no rush to return to the book, but the movie turns satire into straight up comedy.  I dunno.  The film felt defanged to me, but was probably the only way to get it made.  One sign of Bateman's... issues was that he belonged to a video club and would continually check out and return Body Double.  It's an ongoing concern in the book whether he has returned his tape and whether it's available.
Like a lot of movies I felt were not going to be something I could rent as a kid, I sort of compartmentalized Body Double and just never saw it.  So, after Paul and I were talking about DePalma for reasons tied to a different film, I figured I'd take 6th grade me who'd seen this movie's cover so many times and finally just watch the thing.
Read more »
Posted by The League at 9/29/2021 02:36:00 PM No comments:

Watched:  09/28/2021
Format:  Shudder
Viewing:  Unknown
Decade:  1980's
Director:  James Signorelli
Well, it's now an annual thing that I watch Elvira: Mistress of the Dark (1988).  So, I won't belabor y'all with yet another pondering of the film.
This year, Cassandra Peterson is marking 40 years in the dress as Elvira, originally a late-night horror hostess character that somehow has spun out into a cultural icon.  These days, Peterson does conventions, co-owns/ed a convention, does talk-shows, cooking shows, whatever it takes to pay the bills - including selling comics in which her character partakes in comedically spooky adventures (currently at Dynamite).  And! she's got fashion lines, shops and a bit of a merchandising empire.
She also just turned 70, and released a tell-all biography that is sitting on my coffee table.  Recently she's been a hit on talk shows making the rounds plugging the book as it contained the revelation she hasn't been single in 19 years (which I couldn't personally figure out) as she's partnered up with a lady friend.  It's all been very buzzy in a very positive way.
In the middle of all this, and as Elvira is The Queen of Halloween, Shudder has released a 4-movie return to macabre greatness as Elvira does a stint once again as the hostess with the mostest.
One of those films - Elvira: Mistress of the Dark.  So, yeah, it's a heavy serving of meta wrapped in a meta tortilla.   She's still every bit herself after a small stretch of time away from the divan (but not the internet), and so it's great to have her joining you for the movies.
Honestly, I could never sort out why one of the streaming services didn't do this forever ago.  It just makes sense as a format.  And, if anything, Elvira is maybe more popular now with people willing to spend money on her than at any time in the past three decades.  She genuinely has generations of fans after 40 years.  I guess Shudder finally did the math on that.
Still, only four movies!  And who knows if Peterson will want to do it again.  She sounds very ready to not have to put on the outfit anymore, and I don't blame her.  So, maybe she'll go animated, try again to find a replacement, or figure something else out.  Whatever she wants to do, I'm good with it.
In the meantime, get the Shudder App.  There's a free week of trial, and you can probably blaze through her show in that time. 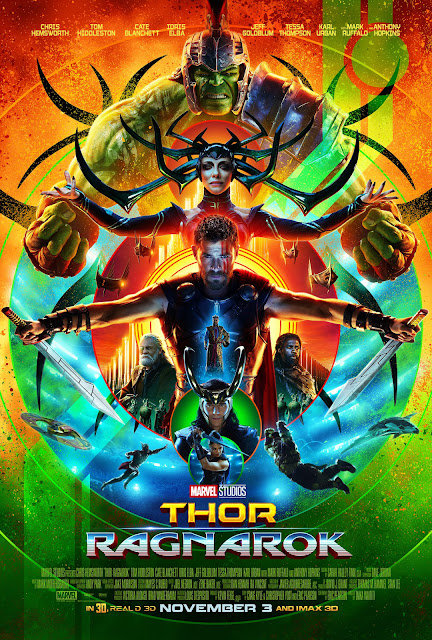 Watched:  A while back
Format:  Disney+
Viewing:  unknown
Decade:  2010's
Director:  Taika Watiti
For more ways to listen
Jamie and Ryan have been displaced in time, but return to podcasting Marvel movies in order! Our conversation is out of this world as we take on a threat that we kind of forgot about - doing this podcast - and it comes back to bite us. Join us as we talk the pivot point for Thor in the Marvel U and Cate Blanchett being sassy as all get-out.
The Signal Watch PodCast · 161: "Thor: Ragnarok" (2017) - Avengers Countdown 17 w/ Jamie and Ryan
Music:
Thor Ragnarok - Mark Mothersbaugh
Immigrant Song - Led Zeppelin, Led Zeppelin III
Marvel Movies PodCasts
The Signal Watch PodCast · Avengers Chronological Countdown (w/ Jamie and Ryan)
Posted by The League at 9/27/2021 11:51:00 AM No comments: 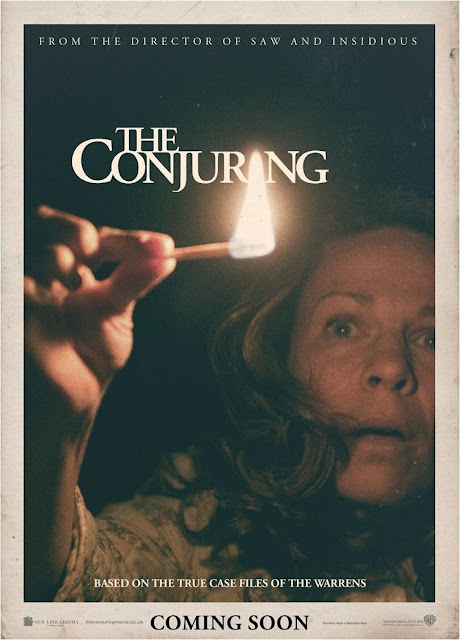 Watched:  09/25/2021
Format:  HBOmax
Viewing:  First
Decade:  2010's
Director:  James Wan
So, it's not a huge secret that I'm a little skeptical of a lot of horror.  When you're like "you know that scene in Hereditary?" I'm like "Nope."  I mean, I just don't make time for it.  I'd rather be watching guys in large suits make time with dames with great hair and schemes.
But enough has been said about The Conjuring from 2013, that I finally watched it as I rev up for Halloween season.  And, I genuinely liked it.  Well, I liked about half of it.  The rest was fine.  Which I know will be taken as "bad", but that's not what I mean.  I was fine with it up to a point, and then I really liked it.
My favorite haunted house movie is and will be a tie between The Shining and 1963's version of The Haunting.  But... this one sure ain't bad.  And, as was discussed elsewhere with MBell, this is a Stefon movie.
Read more »
Posted by The League at 9/26/2021 01:17:00 AM No comments: