Merry Christmas, Everyone. May You Find a Light in the Dark on Your Silent Night.

Well.
Merry Christmas.
I hope your Christmas Eve is peaceful.  I hope it is quiet.  I hope you are where you want to be, even as I know that's too few of you.
It's a night of anticipation, and in the morning the sun will rise.  We get another chance to be better than we were.
May your Christmas bring you some joy.
Here's to all of us here on the good Earth.
Posted by The League at 12/24/2022 06:03:00 PM No comments:

Watched:  12/23/2022
Format:  Amazon Watch Party
Viewing:  First
Director:  Ron Underwood
Sometimes I wish every movie came with a history of what happened from the screenplay to the final product.  Otherwise, such as in the case of Holiday in Handcuffs (2006), I - the viewer - am left wondering "what happened here?  who did this?  who did they do it for?  and why did they do that?"
My go-to move is to assume massive fiddling went on as the movie went through development, or that there were re-shoots.  This movie is too cheap for re-shoots, so I'll go with Execs Had Ideas and it was going on Disney's "ABC Family" network, a network that has been many, many things and the catch-all for Disney product with no obvious home.
Directed by the same guy who brought us Tremors and City Slickers before sliding into Mighty Joe Young and The Adventures of Pluto Nash and eventually lots of TV, I have no idea what hand he actually had in this film.  Look, I watched all of Inhumans (twice!), which was also a product of ABC execs, and I'm still dealing with the scars of that misadventure.  I refuse to believe anyone making product for ABC networks isn't getting it from all sides.
Here's my suspicion:
Read more »
Posted by The League at 12/24/2022 02:54:00 PM No comments: 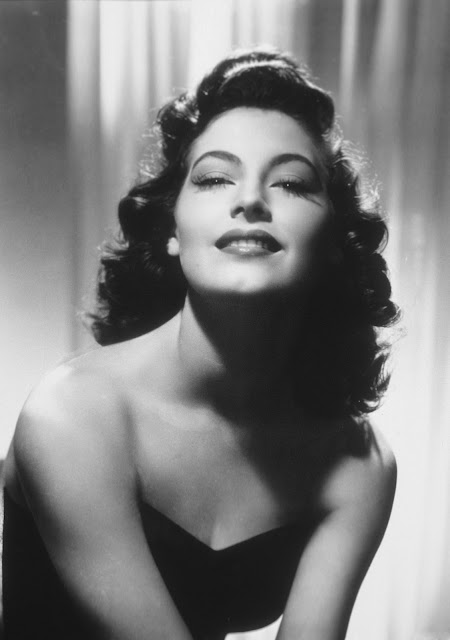 Today marks the 100th birthday of actress and icon Ava Gardner.  We'll not try to capture her biography here, but suffice to say - she was one of the greats.  It's hard to imagine the films she stars in casting anyone else, and her personal life was the kind of stuff they make movies about.
There's an Ava Gardner Museum in Smithfield, NC that I hope to visit one day.
Here's to a career and legacy and people still talking about you at a Century.  Happy birthday, Ava. 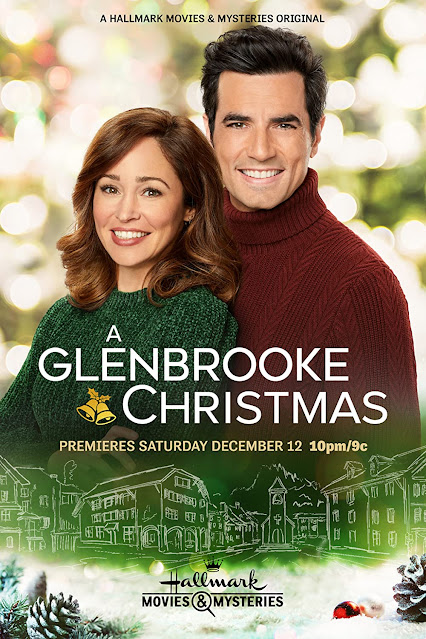 Watched:  12/21/2020
Format:  Hallmark?
Viewing:  First
Director:  David I. Strasser
This movie wasn't very good.
Basic "I'm lying about who I am" plot as an heiress goes to an idyllic smalltown and falls for a fire fighter in generic Hallmark style.  The movie comes remarkably close to saying some true things about what happens when rich people start eyeing a community as the next hip place to move (they ruin it.  See: Austin), and that rich people are weird and don't relate well to non-rich people (in my experience - about 50/50.  It surfaces in subtle ways to absurd ways.).  This, of course, makes the rich person mad.  And the movie has to back pedal and say rich people are totally normal and don't fuck up the economy of middle-class towns.
The excuse-plot is that the heiress came to hear Christmas bells her parents loved, and the carillon is broken (the movie refuses to use the word carillon for mysterious reasons, and keeps describing the carillon instead.  You can teach people new words, Hallmark.).  The cost of repair is $10,000.  Not chump change.  But the hero is a millionaire many times over.  That's a write-off for her if she fixes it, but the movie refuses to let her just find a way to and over a bag of cash and instead leverages her rich pals to buy Kinkaid knock-offs from local teens.
Discovering that (a) his new ladyfriend is a millionaire and not who she said she was, and (b) knowing that even if he got past that, she and he will have nothing in common, our firefighter reasonably calls it a day.  But she doodled him in a sketchbook, and rather than seeming creepy, he decides this means its love and he was wrong about her and the situation, and he judged her wrongly.
Eh.  Did he, though?  In some ways, you'd really have to think "I've been dating a sociopath."  But at the same time, deciding to rush into marriage with a multi-millionaire before the endorphins clear and she thinks of a pre-nup is a baller move.

What could be more merry than watching 90 minutes of Unlawful Restraint charges pile up?  Not to mention assault, etc...
Join us as I get in a trifecta of Saved by the Bell alumni in Christmas movies in this Mario Lopez/ Melissa Joan Hart pair-up.  (See:  Lucky Christmas and Northpole).
Is it good?  Probably not.  Is it free?  It depends on how you categorize your Amazon Prime membership and viewings.
Anyway, you'd hope something with handcuffs this much at the center of the film that isn't The Defiant Ones would be kind of fun.  I don't know how any of this set-up will play out in a way that doesn't work a bit like the Saw franchise, but that doesn't seem very Christmassy.  And it's not, like, *fun* handcuffs.  It's an ABC Family original film.
It's also got Markie Post!  Who doesn't love Markie Post?  No one.  She was great.
But I am sure we can make something out of this.
Day: Friday December 23rd
Time:  8:30 Central, 6:30 Pacific
Service:  Amazon
Price:  I think it's streaming for free with Prime
Click here to Houdini your way to Holiday Hilarity
(link live 10 minutes before showtime)
Posted by The League at 12/22/2022 10:49:00 AM 2 comments:

Today marks the 105th anniversary of the arrival of actress Audrey Totter.

Join us in celebrating Audrey!  Here's all the posts we've done about Totter's work. 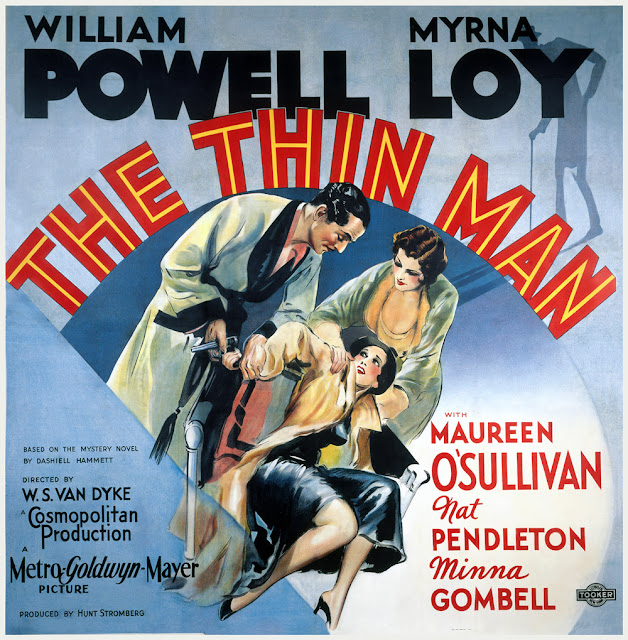 Watched:  12/18/2022
Format:  BluRay
Viewing:  Unknown
Director:  W.S. Van Dyke
For more ways to listen, click here
Join JAL and Ryan as we get into the gin, watch a bona fide cinema classic, ponder what makes it great, and toast the hell out of each other. It's a festive good time as we talk classic mystery, the fading of memory around even the best of stars, and Ryan probably overplays his hand discussing Myrna Loy.
Video PodCast
Audio Streaming PodCast
The Signal Watch PodCast · 226: "The Thin Man" (1934) - A Holiday Day Drinking the Movies w/ JAL and Ryan
Playlist Holidays 2022
The Signal Watch PodCast · Holidays 2022
Noir Playlist
The Signal Watch PodCast · Noir Watch
Posted by The League at 12/19/2022 08:08:00 PM 2 comments: 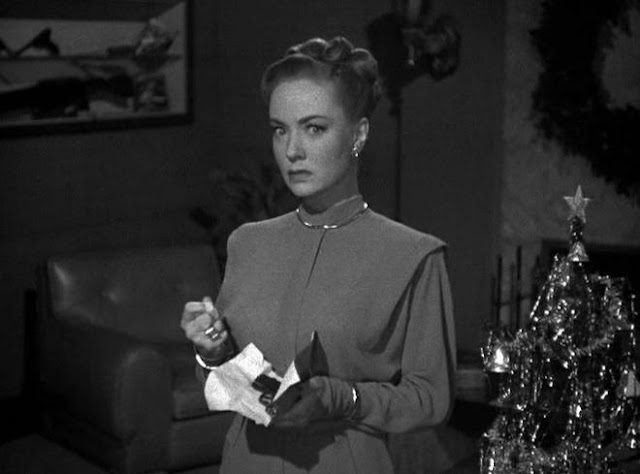 Watched:  12/18/2022
Format:  Amazon
Viewing:  Unknown
Director:  Robert Montgomery
I've now made it an annual tradition to at least put on Lady in the Lake (1947), the incredibly bizarre adaptation of a Raymond Chandler-penned Philip Marlowe private detective classic.
Parts of this movie have a chill that you only get when you're not in the warm embrace of home and hearth on Christmas.  Some parts are very badly conceived, pushing the conceit of the 1st Person POV to the breaking point of usefulness, and no one who worked on the movie seems to care much about the actual plot of the novel -  they reduce major scenes from the book to minor exchanges of expository dialog, and it's incredibly confusing unless you're aware of the book or listen super hard.  The idea is that the characters are so great, you want to spend time with them, and it's not an entirely misplaced notion.
But, holy cats, for being the director, Montgomery has no idea how hardboiled dialog is delivered.  I understand not wanting to imitate Bogart or Powell, but he adds a weird, wry laugh to lines that don't make any sense at times.  It's... not great.  Especially since you only hear and don't see him.
Anyway - you have to spend some time with Audrey Totter every holiday (her 105th birthday anniversary is the 20th), and this is a pretty good way to do it.
A while back, Jamie and I podcasted the film.  Give it a listen!
Posted by The League at 12/19/2022 10:39:00 AM No comments: 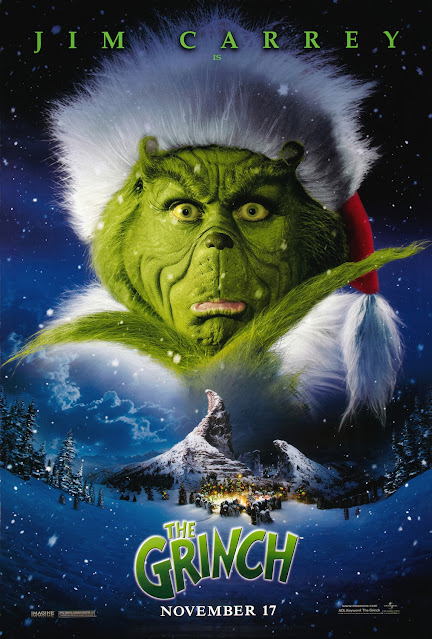 Watched:  12/16/2022
Format:  Amazon Watch Party
Viewing:  First
Decade:  2000's
Director:  Ron Howard
People love this movie.  I was aware of that, but had no interest in the film when it came out. I'd read the book a lot as a kid, and I'm a purist when it comes to Chuck Jones and my enjoyment of his work.  And aside from some of the finest Looney Tunes installments, the annual TV special of How the Grinch Stole Christmas was his signature work.  As a collaborative work (Jones, Seuss, Karloff, Ravenscroft, Poddany) it's hard to top.
Director Ron Howard never saw a project he couldn't make more mediocre by running it through his Hollywoodtron-3000.  He understands the beats of movies, and deploys bombastic music and whatnot to get the audience on board as he takes them through their paces, but the movies always wind up feeling hollow and less than the sum of their parts.  Yes, I know he was funny on Arrested Development.  But I don't know how you take The Grinch and make a faux Tim Burton film that also manages to reframe the original story to such a degree that you miss the point of a children's book.
Look, part of the joke of the original Grinch book is that he's just a bastard.  No one made him that way.  We can speculate about shoe sizes and head fittings, but as far as we're concerned, he's just the local jerk who watches from afar.  He simply is.  But the original book is 64 pages, with a few sentences per page and lots of art.  The movie needs a decent runtime, and so the filmmakers (and Howard is a director, but he's also basically a producer) padded and padded and padded some more!  They padded this out til their padders were sore!
I mean, they had to pad the book for a 20-something minute cartoon version of the book.
So - we get a backstory for the Grinch where we see maybe it's nature that the Grinch is an asshole, but also it turns out those harmless Who's in Whoville are frightened, judgy assholes who elect the worst of them to run things.
Read more »
Posted by The League at 12/18/2022 11:06:00 AM 4 comments: