Watched:  05/01/2022
Format:  HBOmax
Viewing: First
Decade: 2020's
Director:  Matt Reeves
For more ways to listen
It's no riddle which flying rodent-enthusiast had a blockbuster in 2022. The Dynamic Duo of JAL and Ryan get back to the Batcave to talk all about the latest take on the Dark Knight Detective. It's time to get broody as we go batty talking how this one fits in with the big picture, and what makes it unique.
SoundCloud
The Signal Watch PodCast · 199: "The Batman" (2022)- a Kryptonian Thought Beast Episode w/ JAL and Ryan
YouTube
Music:
The Batman - Michael Giacchino, The Batman OST
Batman - Neal Helfi
Something In the Way - Nirvana, Nevermind
DC Movies Playlist
The Signal Watch PodCast · DC Cinema and TV
Posted by The League at 5/13/2022 09:00:00 AM No comments: 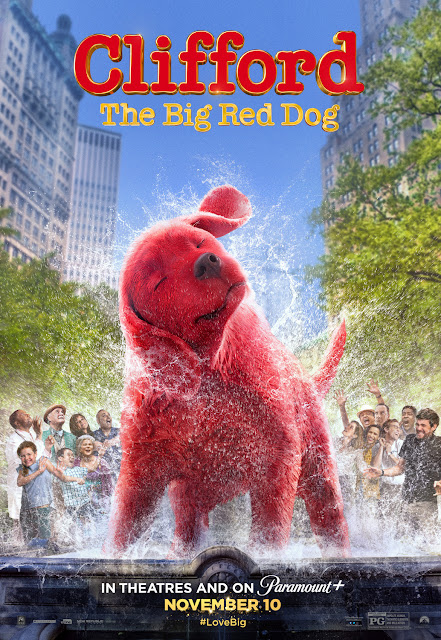 Watched:  05/06/2021
Format:  Amazon
Viewing:  First
Decade:  2020's
Director:  Walt Becker
I dunno.  This is for very small kids, but it also felt like it wasted a lot of goodwill and a lot of potential.  Clifford is a character I don't think about much as I am 47 and I have no children.  But I think if all you can think to do is make a boilerplate kiddie movie that seems lifted from every kiddie movie since Uncle Wat turned his attention to live-action, I dunno.  He's a big fucking dog.  Workshop that shit.
The movie is chock full of cameos and small roles for known talent and looks like they spent some money on it.  It's a beloved and well known character, and...  it kinda feels like they didn't really know what to do once they got the rights.
It also takes place in the city, which...  look, maybe the first book is urban, but Clifford is a suburban character.  NYC is a lot of things, but it is not a place where a giant dog is going to fit terribly well long term (he wrote as his own giant dog put his massive noggin on his hand and keyboard).  Like - look, the 'burbs are more dull and less diverse than Harlem - but this is also a fictional movie, and/ or could have been in a small town?  I don't get the setting.  It's okay to country-fi that story.
Maybe the thing that was weirdest about the movie is that it desperately wants to be about *something*, and the thing Clifford had going for him in his origin story is the power of love (to turn a small sickly puppy into a giant dog).  But the movie decides to be about accepting something/ someone who is different.  But then it's about very White people in gentrifying Harlem who seem boringly ordinary, even the wacky uncle who needs to grow up borrowed from every movie, ever.
I'm all about messages of "hey, don't fear something because it's different or you don't understand it", but the speech at the end is wildly nonsensical and unearned.  Being "new to school" is not weird or different, it's...  an uncomfortable period of adjustment (I moved 3 times during my school years.  You adjust.).  Our Emily Elizabeth is a pretty standard kid.  She doesn't have a third eye or something.  She's "poor", but NYC giant apartment poor.  Normal in her world is having a 27 million dollar loft.
Honestly - who wrote this thing?
Anyway.  I thought the cast looked like they were having fun, Clifford was cute and the last act was at least kind of fun/ funny.  I wouldn't not show this to a small child.  But I also am disappointed that this is the Clifford movie we got.  It's better than the Air Buddies movies by a country mile, but it's still... meh.  Gimme a trick or treating Clifford of GTFO.
Paddington raised the bar for timeless children's characters into movies, studios.  Work harder.
Posted by The League at 5/09/2022 10:16:00 PM No comments:

Watched:  04/29/2022
Format:  Amazon
Viewing: Second
Decade: 2000's
Director:  Mark Steven Johnson
For more ways to listen
We make a costly pact for minimal gain - watching 2007's edge-lordiest superhero as he monkeys his way through not hiring a lawyer and all the fall-out. Join us for discussions of acting choices, when the plot in no way adds up, Nic Cage and very, very small feet in this just-before-Marvel-got-good installment.
SoundCloud
The Signal Watch PodCast · 198: "Ghost Rider" (2007) - A Marvel Madness PodCast with Danny Horn (and Ryan)
YouTube
Music:
Ghost Rider - Christopher Young, Album
Ghost Riders In The Sky - Spiderbait
Marvel Madness PodCasts
The Signal Watch PodCast · Marvel Madness - Movies and More...!
Posted by The League at 5/08/2022 11:19:00 PM No comments: