For more ways to listen
Oh, the Inhumanity! We reach the plodding 5th and 6th episodes, which feel like a whole lot of filler and not a lot of thriller. Once you get past realizing Dave is one hell of a right-on dude, you're in for more casual disregard for the sanctity of life, slow working drug dealers, and trying to remember Sammy is on the show. Oh, and Maximus is very, very sensitive. Mostly, the show is filling space and killing time til we can get to the final two episodes.
SoundCloud
The Signal Watch PodCast · 208 C: "Inhumans" (2017) - Episode 5 & 6 - A Superheroes Every Day PodCast w/ Danny and Ryan
YouTube
Music:
Paint It Black - Valerie Broussard
Don't Fear the Reaper - Denmark & Winters
Superheroes Every Day Playlist!
The Signal Watch PodCast · Superheroes Every Day
Posted by The League at 9/24/2022 10:40:00 AM No comments: 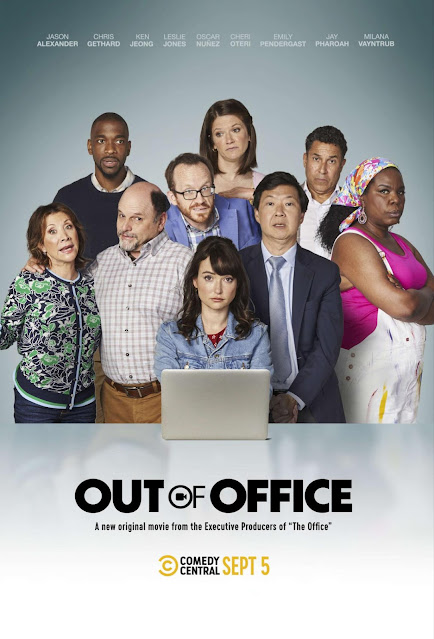 Watched:  09/10/2022
Format:  Comedy Central DVR
Viewing: First
Director: Paul Lieberstein
Not so long ago, I got my bivalent COVID booster shot, and it basically took my ass out all weekend.  At some point I'd decided to DVR the Comedy Central movie Out of Office (2022) as it seemed to have okay comedic actors in it, and you never know.
Leslie Jones, Ken Jeong, Jay Pharaoh, Oscar Nunez, Jason Alexander, Cheri Oteri, many others, and - most important, Lily the AT&T girl herself, Milana Veyntraub.  I think we've all been pulling for Veyntraub for a while, but she never really shows up anywhere other than AT&T ads.  She was almost a Marvel at one point, but her turn as Squirrel Girl has disappeared into the bin of history.
This movie, written and directed by King of the Hill and The Office alum Paul Lieberstein, is truly a complete waste of a viewers time.  Everything is vaguely joke shaped in a way that you can imagine working if it was workshopped a bit or didn't feel like something pulled out of a Judd Apatow movie's reel of stuff that didn't even make the bloopers.  The lead (tragically Veyntraub) is breathtakingly unlikable as written, which translates to - this is just like sitting at work with your worst colleagues, not people you want to spend time with.  And, worst, it tries to find some schmaltzy closure about the friends we found along the way at the end, which is utterly unearned.
Read more »
Posted by The League at 9/23/2022 10:31:00 AM No comments: 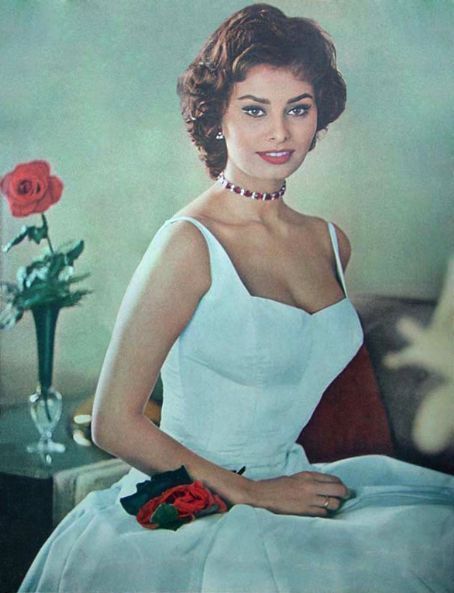 Happy Birthday to Sophia Loren, who may have been the one to first inspire the phrase "great googledy-moogledy" 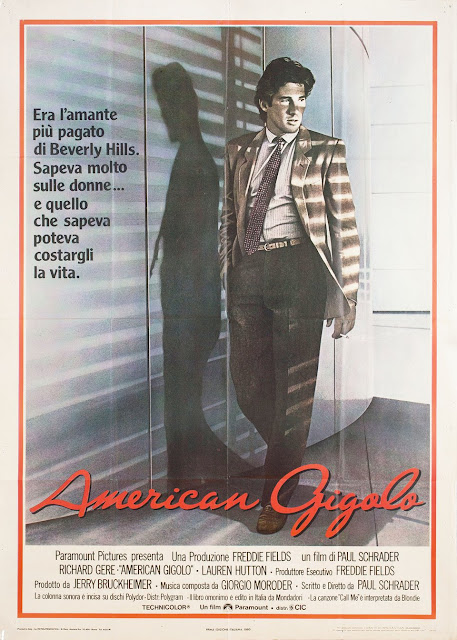 Watched:  09/17/2022
Format:  Streaming Paramount+
Viewing:  First
Director:  Paul Schrader
After watching Cat People for our Halloween podcasts, and making my way through Karina Longworth's You Must Remember This podcast series Erotic 80's, I figured I should get around to watching American Gigolo (1980) a movie I'd successfully not seen for 42 years but never actively avoided.
I was doubly enticed by a Georgio Moroder soundtrack and finding out the movie had Bill Duke and Lauren Hutton, and was excited to see both for very different reasons.
I should have watched the movie years ago after catching a cab in Las Vegas with some pals and - as I am wont to do - I began chatting with the cab driver who revealed to us his dream of becoming a gigolo.  And he used that word (with what seemed like a Russian accent, but I didn't ask).  We stayed in the car way after arriving at the hotel and listened to him discuss his strategy and goals.  He really, really wanted to sleep with older women for money.  I hope he's out there now with someone named "Gertrude" just raking it in.
Anyway, I was completely ignorant of the plot of American Gigolo (1980), but what I assumed it to be was not what it is.   Honestly, I assumed it was a melodrama entirely about the life and loves of a gigolo in LA in 1980.  Seemed like there was plenty there as hunky Richard Gere impeccably banged his way across the Los Angeles landscape until finding real love or something.  And it is that, but with 45% of the runtime caught up in a murder plot that, frankly, is intensely telegraphed from the minute it kicks into gear (no pun intended).
I don't know exactly what I was expecting, but American Gigolo is also a movie that seems to live in a curious twilight zone of being frank about sex in many ways, but in comparison to, say, Body Heat which would show up a year later, it feels almost chaste.   Look, Lauren Hutton is...  a whole scene.  But I kinda wish the movie was just whatever was going on with Gere and Hutton.
That said - this is a watershed film.  It isn't looking backward the way Body Heat would, it's leaning forward into adult-oriented fare but it also needs to serve an audience in 1980 who probably could have been interested in just the loves and issues of a gigolo, but would really get hooked by a crime story.  But I was kinda curious where the movie was going with Gere's alternately broken and abstracted sexuality which feels like it needs a lot more investigation than what it gets.
Everything you've heard about the hyper-stylization of the movie is true.  It's gorgeously shot and really does do its utmost to bring the various worlds of the Cali nouveau-rich and establishment rich as well as the occasional dive into other locales from gay clubs to political fundraisers.  It's a Playboy spread of the best in the lifestyle of the swinging gentleman, from cars to stereos to tasteful book collections and artfully placed desks.
But now it almost looks quaint.  Miami Vice did this weekly on TV within a few years.  It's become a pastiche in other movies.  Still, it works.  And in no small part because the score on this thing (Moroder) - riffing occasionally on Blondie's Call Me is so f'ing great.*
All in all, the movie wasn't what I expected, and that took some adjustment.  What it did do, though, I think earns the reputation in some ways, less so in other ways (sexy ways).  But as a perfect artifact of "what set the tone for the 1980's?" you'd be hard pressed to find the thing better than this movie, which seems unaware the 1970's ever existed.
*no one told six year old me blasting Call Me from the Chipmunk Punk album how the song became so mainstreamed
Posted by The League at 9/18/2022 11:06:00 PM 1 comment: 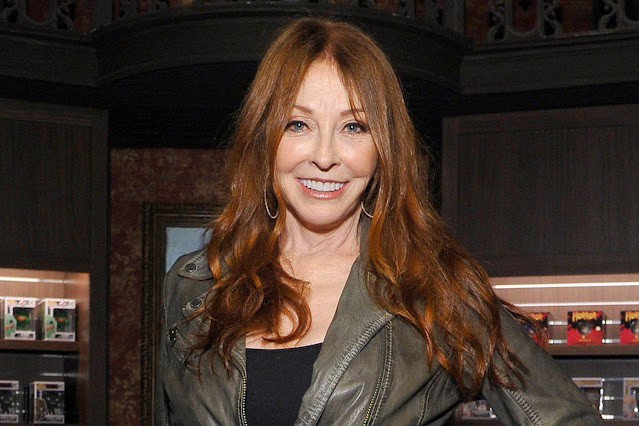 Happy Birthday to one of the greats of the Signal Watch faves pantheon, Cassandra Peterson!
This year, we read Peterson's memoir, Yours Cruelly, Elvira: Memoirs of the Mistress of the Dark.  And, kids, it is a wild @#$%ing ride.
Here's to Ms. Peterson living her best life.
Posted by The League at 9/18/2022 09:10:00 PM No comments: 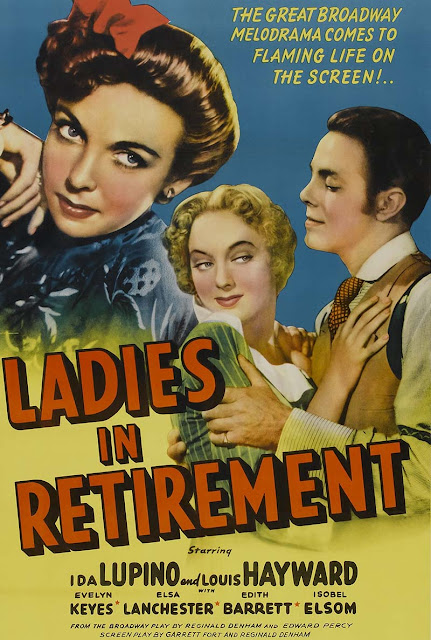 Watched:  09/16/2022
Format:  Amazon Watch Party
Viewing:  First
Director:  Charles Vidor
Everything about this movie screams pre-WWII play.  More or less a single location/ set, daffy characters, moments of strong internal reckoning, a maid to be the dumb one, a ne'er-do-well relative, and a dowager-type causing trouble.
And I loved it.
We picked this as a watch party before we dive into the monster season entirely on the cast.  Starring Ida Lupino, Louis Hayward, Elsa Lanchester, Evelyn Keyes, Isobel Elsom and Edith Barrett, I was entirely curious as I'd only seen mention of the film on Jenifer's blog before - and that was a faded memory.  It's now streaming on Prime, and I suggest you go check it out.
And, man, is Elsa Lanchester ever good (and so underutilized by Hollywood).
Posted by The League at 9/18/2022 01:50:00 PM No comments: