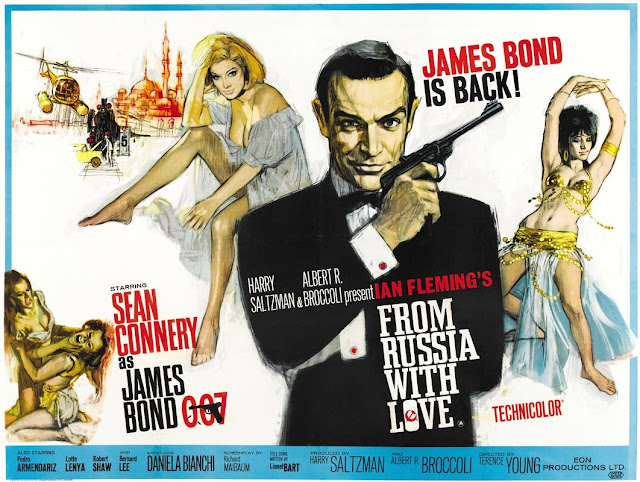 As I mentioned in my chat on Dr. No, Jamie got us the "50 Years of Bond" BluRay boxed set for Christmas.  We're fans of 007, and it looks like we're going to gradually make our way through the Bond movies in chronological order.

I should also mention, I'd seen this movie another time in recent years, but my comments were brief, to say the least.

It's amazing to see the jump from a sort of rough sketch of Bond movie we get with Dr. No (1962) to a full Bond film with From Russia With Love (1963).  Of course, if you start in the Marvel Cinematic U, even the much-celebrated Iron Man that launched the whole enterprise feels a bit primitive in comparison to what we're now getting.*

This adventure sends Bond to Istanbul in 1963 as the Cold War is underway.  SPECTRE has recruited a top SMERSH agent (Rosa Kleb, who has effectively defected to SPECTRE), but only the top Kremlin brass have that intel.  This agent grabs one of the top SPECTRE prospects, played by Robert Shaw, to execute the plans given to her by the chief SPECTRE strategist.  Their plan is... incredibly convoluted - but they'll have an attractive staffer at the Russian Embassy in Russia throw herself at Bond with the gift of a Russian code-device.

Wrapping Up 2015 - Those Who Merged With The Infinite 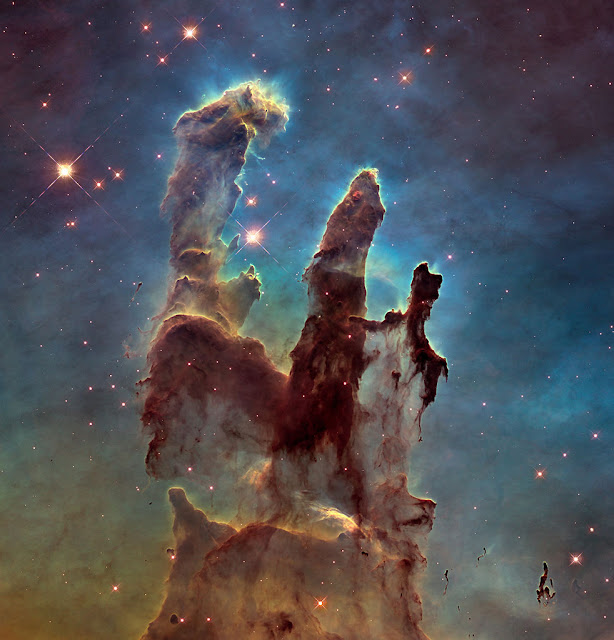 Here at The Signal Watch, we try to mark the passing of folks relevant to the content of the site.  We certainly don't catch every single passing, and it's a bit of arbitrary business deciding who we'll mention and who we won't.


We bid a heartfelt good-bye to these talents who made their mark on the world.  We're better for having had them here.

To see the posts, look for the "Passing" tag on posts, or click here. 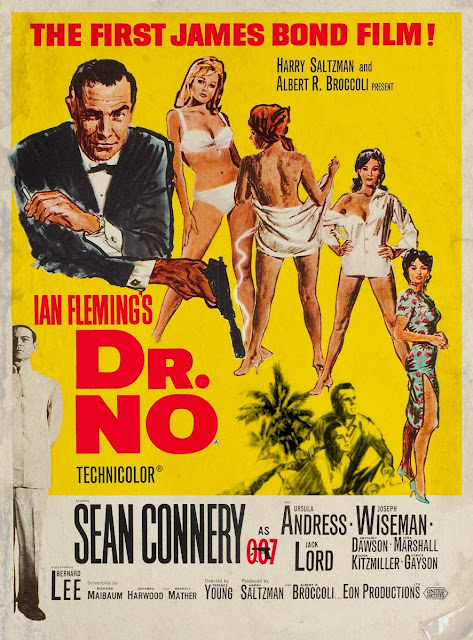 It's been so long since I've seen Dr. No (1962), and I remembered so little of it, that I'm calling this the first time I've seen the movie.  I remembered a few things from the movie - the look of Dr. No, Ursula Andress and Quarrel, the local fellow who rightfully does not want to get all that mixed up in Bond's adventures.

For good or ill (for you people), Jamie's Christmas gift to me was a 2012 boxed set of "50 Years of Bond", so, yes, I now have every single Bond movie on BluRay, so you can probably expect we'll be looking at a lot of Bond over the next few months.

The timing isn't entirely coincidental (I just asked for confirmation on this).  Jamie ordered the set partially because (a) she knows I've always liked Bond, and I've become more interested in Bond in recent years and (b) I was reading the books.  Also, Jamie (almost) always likes Bond, so it's not like I need to wait for her to go to bed to put one of these movies on. 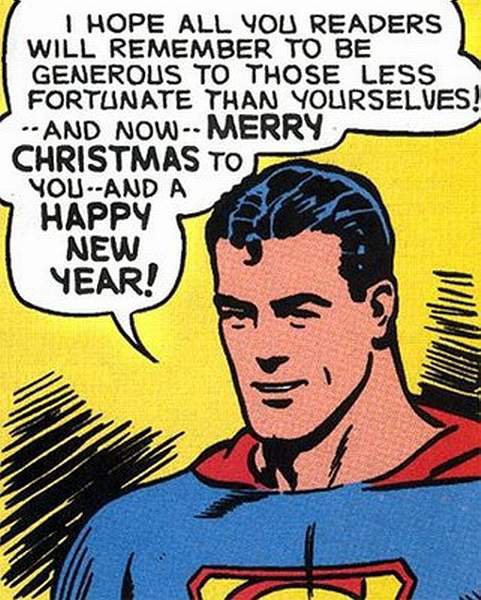 In this time of thanksgiving, let's take a moment to reflect on the goodness and generosity we've received this year, and maybe how we can repay that into the great karmic circle in 2016.

For now, I wish you a day of peace and joy.  May you be with loved ones, or at least be in touch with them on this day.  And I hope, as this year draws to a close, you can cherish the good moments and put the bad behind you, with lessons learned from both.

Have a Merry Christmas, however you celebrate the day.  Jamie and I wish you the best. 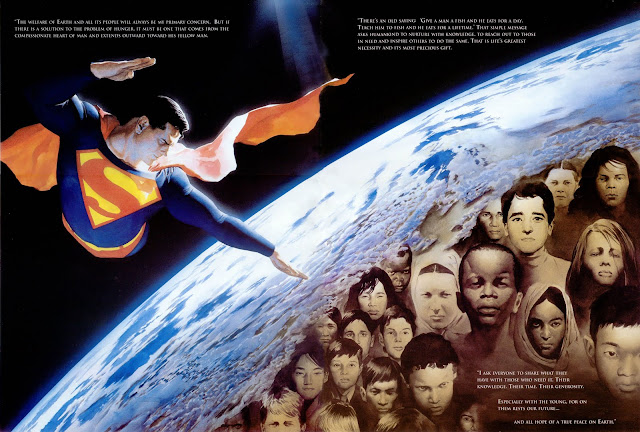 Yesterday we put forth some songs for your melancholy Christmas Eve.  After scrolling my Google Play, I found a few more to consider.  Maybe with a little less to discuss.


The Walkmen: No Christmas While I'm Talking

No one is going to think this is a new Christmas standard, but it's a good way to get into the evening.

For Your Christmas Eve Listening

Tomorrow night is Christmas Eve.  As we head into the evening, when you've tucked the kids away (or the parents), and you've got the house lights turned low, with only the soft glow of the Christmas lights on the tree to carry you through (and maybe some Elijah Craig, neat) - and it's time for some music to take you through the evening.

I can't remember a Christmas Eve in the past 30 years when I wasn't the last one awake in the house, and so it comes that I think of the night as one of solitude and of waiting.  In the morning, we'll have breakfast and coffee, then gifts and talking.  In the afternoon, we'll head over to my folks for dinner.

But on Christmas Eve we watch our family and friends drift off to bed, one by one, and, as always, we know we'll never get any sleep.  There's no use in watching a movie or opening a book.  It's time for some music and quiet contemplation.

But what do you listen to in order to maintain the mood?


Bob B. Soxx and the Blue Jeans: The Bells of St. Mary's

Originally written in 1917, most folks today know the song as a Bing Crosby crooned ballad from the 1945 movie of the same name.  The Bells of St. Mary's gets the Phil Spector treatment, and the world is better for it.

Still, catch the movie sometime.  It's a real tear-jerker and a fine Christmas film with Ingrid Bergman in angel mode.

TCM Remembers the talent we lost in 2015.  Always a tremendous tribute. 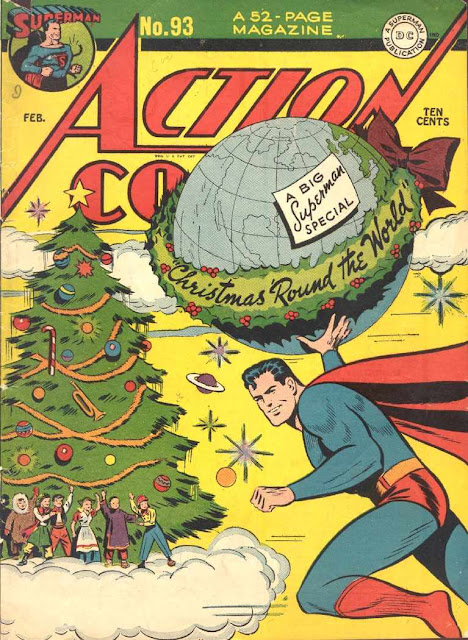 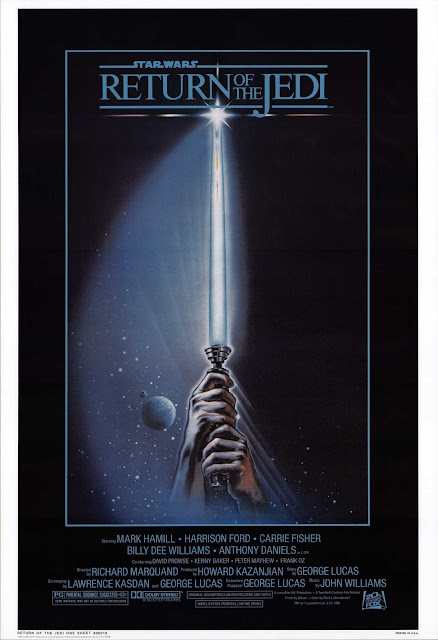 Ah, Return of the Jedi (1983).  The much-debated finale to the original trilogy, where people get mad that the Empire is defeated by a band of teddy bears.

Look, it doesn't bother me.  In fact, I like it.  The Emperor has "foreseen" how all will unfold.  He's moved the pieces into place so that the Alliance will finally be crushed, caught in a Battle of the Bulge scenario as the Rebel Fleet is trapped between the fully-operational Death Star and some portion of the Imperial Fleet.  But ol' Darth Sidious here did not account for the forest weirdos he considered so lowly they couldn't play a part in his schemes.  And, not only do they show the Rebels a backdoor to the Imperial Base/ Generator - they take out local security in guerrilla warfare.  So they were kinda cute mammal things.  So what? 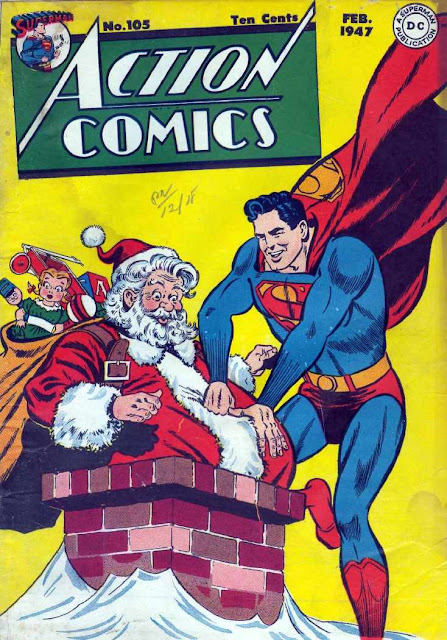 It's Christmas Time with Ann Miller 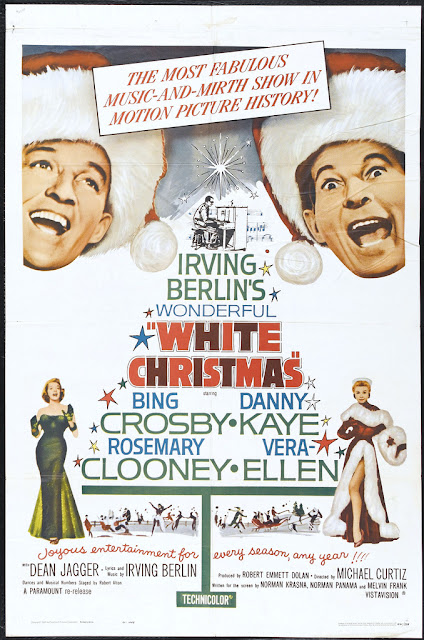 It seems like Holiday Inn (1942) used to be the Bing Crosby Christmas movie of choice for television, but the past few years, probably because it's in color and because they don't have to cut out any super-racist blackface scenes, White Christmas (1954) has been the Bing Crosby film that AMC has really been pushing.

In my book, White Christmas is the Pepsi to Holiday Inn's Coke - both are fine, but I'll usually start with Coke (well, Coke Zero or Diet Coke) and work my way backward to Pepsi.  Again - I don't want to say Holiday Inn isn't hugely problematic by any standard after 1952 or so.  It is.  But when you cut out that President's Day sequence (shudder) the story just works better.  For me, anyway.  Plus, I like Fred Astaire a magnitude more than I'll ever like Danny Kaye.

But we don't have Holiday Inn, we have White Christmas. 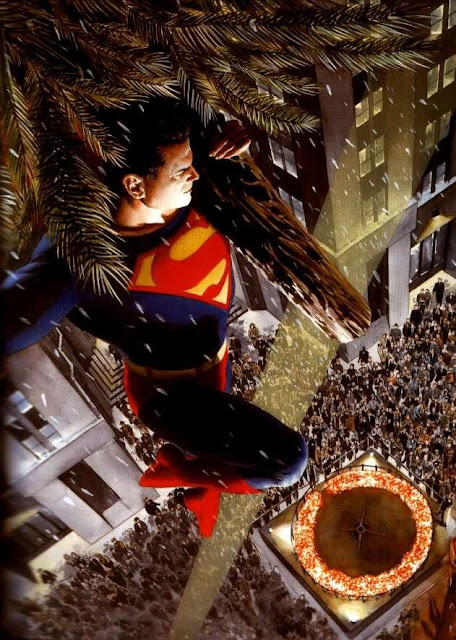 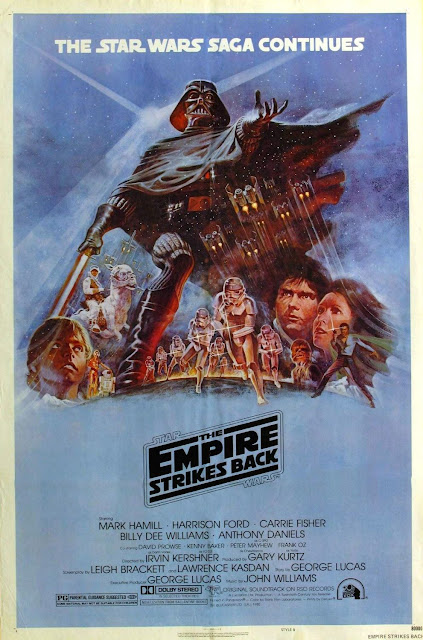 This is the holy mother of Star Wars movies, and it's always a funny one to watch, because I don't disagree, but it's a movie that doesn't make a lot of sense.  The Empire Strikes Back (1980) should be the measuring stick you're using when you start coming at me with plot holes in the new movie, because if you found a few there, this one is like the remains of a tattered sheet hanging on a laundry line after ten years in an Oklahoma back yard.

But I still love it. 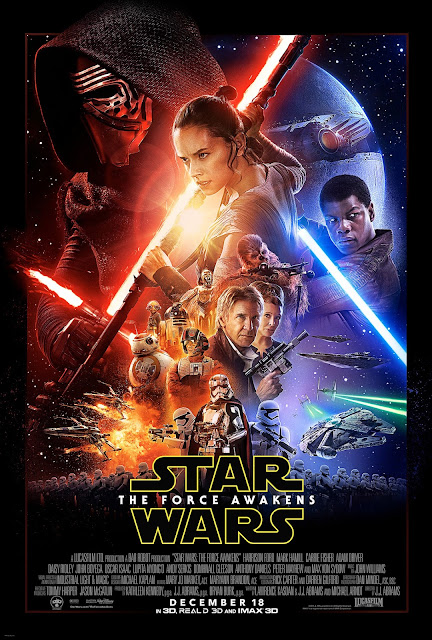 Due to the surge and servers blowing up, etc...  when the pre-sale began, I didn't buy tickets for opening weekend of Star Wars: The Force Awakens (2015).  I was also deeply skeptical of another stab at the movies by a director for whom I have no particular affinity, and who has been involved with some things I thought were downright bad.  In October I wrote a bit about trying to remain optimistic, but cautiously so.  After all, I'd already had not one but three bad experiences with Star Wars, and this would mean the end of my interest in the franchise.

My original plan was to just wait for the reviews to roll in and then pull the trigger on buying tickets or (shudder) not buying them and waiting for the movie to eventually cross my path, but I was talked into buying tickets for my family.  And, good luck finding a day or time before Christmas to get that whole crew in one place.  So, we were headed to see the movie on December 27th.

Then the reviews came out, and they averaged toward very, very good  Not that I read any (I still haven't), but a 90% Rotten Tomatoes score is usually a good indicator of something.  Then word of mouth from trusted sources came back, all spoiler-free, and I was a bit sad I wouldn't see the movie for many days yet.  Then my former boss, who has a 7 year-old son who thinks he's Anakin Skywalker, started texting me, assuming I'd seen the movie, and I realized:  I am going to get this movie ruined for me by accident.  If not the internet (which has done a remarkable job of keeping it's mouth shut.  Which... when has that ever happened?), then someone at the comic shop or at work on Monday was going to blow it.

So, I bought two tickets for 8:00 AM today, the only two remaining seats, I think.  And after getting up at 6:30 AM and arriving at the theater at 7:30, we sat in our front row seats and waited for the scroll.

I am happy to say, I actually very much enjoyed The Force Awakens.

Before continuing - I am well aware of the Spoilers problem around this movie, so if you want to remain Spoiler-Free, best to just say "okay, Ryan was cool with it" and move on.  Because we're just going to talk about the movie after this. 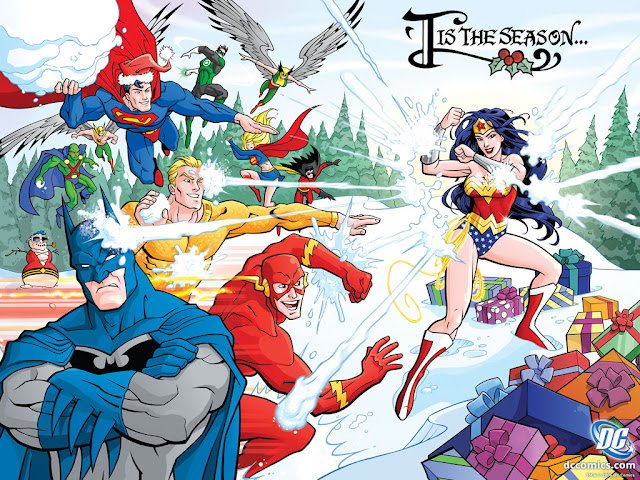 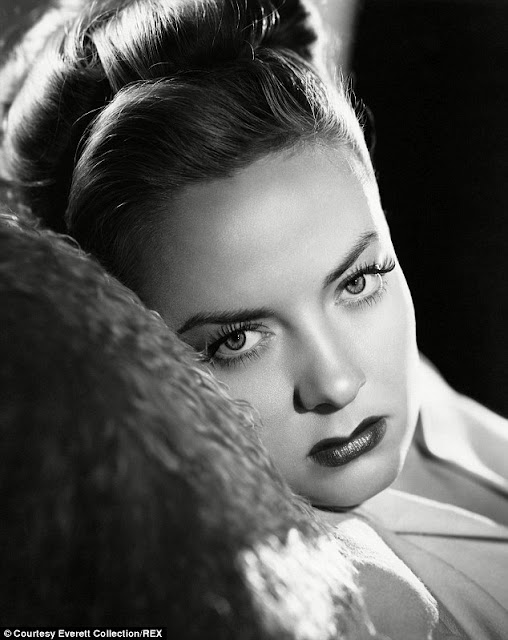 Today marks the birthday of film and television star Audrey Totter, born this day in 1917 in Joliet, Illinois.

The 12th marked the second anniversary of her passing.  We remain big fans of Ms. Totter and continue to enjoy her work.