I think Google has more or less broken my blog 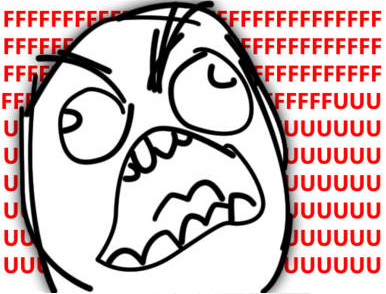 I tried to be a good Google citizen and update my blog to use the new features integrated with Google+.

It's not working out.

I am not sure you guys can see my comments right now, and I'm pretty sure only people with Google accounts can comment - if you can jump through the hoops to make it happen.  Only after "checking out" the new Google Comments did I realize Blogger (a Google product) will not let me back out of their awesome new commenting system.

I use Blogger because, for ten years, it's been really simple, really easy and for the past 5-6 years, its been rock solid.  I use Google stuff all the time, and never have a problem.

I'll keep working on the problem, but this is where I'm at.

Comments are borked until further notice.

Basically, it looks like Google is trying to find a use for Google+ and Blogger in this age where, in theory, nobody blogs anymore.  So they found a way to make them work together, except that it doesn't work.  It also generates so many cookies that it took me, literally, ten tries to figure out if I'd "allowed" all the right cookies.

In short - this is why there's a guy all developers make fun of that can "talk to people", but he's the person who looks at stuff like this and says "guys, this is totally not working.  We need to make this make some sort of sense to actual human beings before we roll this out".  That did not happen here.  This is what I call "success by the developer's standard".

I wasn't watching much TV when Lois & Clark: The New Adventures of Superman debuted.  I was a freshman at UT and the only TV I really watched was:


Of course, the only channels we had good reception for in the dorm were Fox and PBS.

As I recall, the show aired on Sundays, which was homework night.


I did watch the pilot with some buddies, no doubt our iffy reception riddled with static.  And it aired at the same time as the pilot of SeaQuest DSV, and we couldn't figure out which to watch.  In the end we decided to try to pass our courses (barely) and didn't watch either on an ongoing basis, really.

In 1948 Columbia rolled out a weekly Superman serial.  10 years after the Man of Steel had first appeared on a comic book cover, America knew Superman from comics, radio, the Fleischer cartoons, the newspaper strip and games and toys.

Special effects weren't exactly rudimentary in 1948, if you had a budget, but as the serials rolled out as part of kid-friendly Saturday afternoon matinee fodder, this was not a $200 million set-up.  The serials are probably best remembered for the use of animation to show Superman flying (which becomes rarer and rarer as the series progresses).   Basically, our live-action Superman poses, and then is switched to cartoon form for the flying scenes (and that's not to mention the death of Krypton, that seems inspired by your typical Betty Boop cartoon explosion). 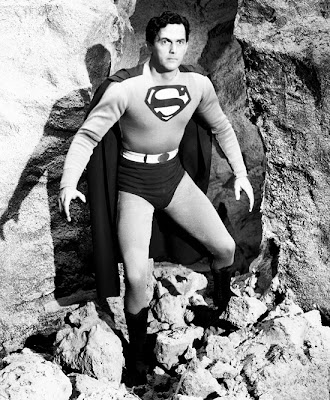 Kirk Alyn is our pre-George Reeves Superman, and he actually looks not unlike the Superman of the comics of the time.  Alyn's a lot more "gee-whiz" than the "Yup, I'm three steps ahead and I got this situation handled" aspect of Reeves' Superman.  Lois is played by Noel Neill, who would return to the role in the TV series, The Adventures of Superman in seasons 2-6.    She's extremely young and perky here, but not the sloe-eyed adventuress of the Fleischer cartoons.  Jimmy is played by Tommy Bond in full huckster, vaudevillian mode in a goofy hat and making faces.

I didn't post last night, so I feel obligated to check in.

I've been down in San Marcos, south of Austin by about 30 minutes, for work the past two days.  Always good to catch up with colleagues and whatnot, and, frankly, it's probably easier getting to the library at Texas State than to my own building every day.  The commute is about the same.

This evening Jamie and I had dinner with the lovely Margarita G., a former local, recently returned, and one of the many folks I've met inadvertently through JimD.  Lovely person, and I look forward to seeing more of Margarita around town.

Somehow I came home and went down several Google holes, including playing Barba Streisand tunes from YouTube to see how long it would take before Jamie asked me what I was doing.  The answer is: 6 songs, and it really took "Papa Can You Hear Me?" from Yentl before she finally started asking questions.

This all somehow got wound up in me simultaneously listening to circa 1980 pop sensation Juice Newton when Paul's ladyfriend, Val, posed on Twitter "whatever happened to Juice Newton?"

I'm not sure, but do I remember Juice Newton?

This week was about how making comics is a collaborative process, and that mainstream comics, especially superhero comics, are rarely the work of a single person.  There's a writer, artist, editor, etc...  associated with every comic that hits the stand.

The process includes many voices, from the writer sitting at their keyboard, to publishers wanting to push circulation, to editors trying to meet deadlines, to artists who seem to reference Maxim photo-spreads all too often.

I didn't read the comics.

I was curious about the instructor's take on the production side of comics and how it would affect the narrative, and I thought the take was interesting, but... not what I expected.  I had expected discussion of how artists can put their own spin on a script, how editors act as mediators working from their own opinions and company dictates, how design of characters can be managed and scrutinized at a very high corporate level, and that intention of writers can be changed by the time a comic is actually produced.  And the fact that artists continually include shots of Wonder Woman's barely-covered butt from a low angle in all-too many Justice League group scenes.

On Monday, I watched the documentary Wonder Women! The Untold Story of American Superheroines on the PBS series Independent Lens.

If you were expecting a documentary about the importance of Wonder Woman to 20th and 21st Century females as a symbol of power for women, you were in the right place.

You can watch the whole thing online at the moment.  Here you go.

The documentary was a good starter kit for someone to consider pop culture touchstones as gateway drugs for empowerment for women and a place to start the discussion of media portrayals of women.  But, if you know your Wonder Woman (and I only kind of feel like I've scracthed the surface of the character), the film followed the prescribed narrative checklist of players and topics you'd get in talking about Wonder Woman's history if you were to talk on the subject for more than five minutes.

I don't really have time for this.

Jamie went out of town this weekend, and I was supposed to be working on The Fortress of Nerditude (aka: my office) as Phase I of a sort of re-do the house plan.  I'm boxing up a whole lot of action figures in order to get rid of them, and I'm kind of mentally having to say good-bye to the past fifteen years' worth of hobby, in a way.  It's not that the office won't remain Super with a capital S, it's that the downstairs living room is going to get de-Supered to a great degree.  My call, not Jamie's.

I wanted to (a) kind of move on from the days when DC Comics was pretty much all I had going on in my life and (b) there's some really fragile and expensive stuff right inside the doorway, and over the years, I've just cringed everytime someone has passed the front door with everything from a ladder to a backpack.

Thursday night I was up til 2:00 AM watching the news about Boston.

Friday I was the guy who could barely work as he kept his eye on the news, waiting to see what would happen, and I was home again when Suspect #2 was captured.  Then Juan came over with a pizza, we watched a documentary and then Drive (2011) as Juan missed it in the theater.

Saturday I worked on my office, walked the dogs, etc...  and then Juan (apparently my girlfriend when Jamie is out of town) and I went to see CarlaBeth in a show she had put together for a local multi-arts festival called FuseBox.  It was a sort of sketch program entitled Failure, and was about the concept of "failure".  Apparently, from concept to performance was about a week, but it included songs, dance, sketches, monologues, games and a cake.

Today I have done nothing but watch about 1/2 of Police Academy on basic cable (I really don't even like that movie, but...) and work on my office.

I slept really late into Saturday.  I was exhausted, and I have to believe part of that was partially due to news fatigue.  It seems the folks in West are coping as well as can be expected and Texans are doing a good job of donating and reaching out to our neighbors.  I sent a guy from work to donate blood on Friday, but I'm waiting to see if there's a second round needed.  I never really know what to do in these emergency situations, so I'm keeping my eyes peeled for opportunity in the coming weeks.

Honestly, I am glad the Boston PD was able to capture Suspect #2.  Already it seemed like Facebook and the mainstream media had turned into places for pundits and amateur pundits to roll out their personal axes and grinders to ascribe motive they couldn't possibly actually know.  Not only will we see the American Justice System (something I firmly believe in - warts and all) play out, but we'll get some legitimate information at some point from the FBI.

Sure, everyone will spin that information to suit their needs and agenda, and we can count on Alex Jones refusing to believe any of it and likely believing the suspects were framed (it's what he does- and if anything Jones does surprises you at this point, I cannot help you).

Here's to next week being a better week.  I have to go clean the house before Jamie gets home.