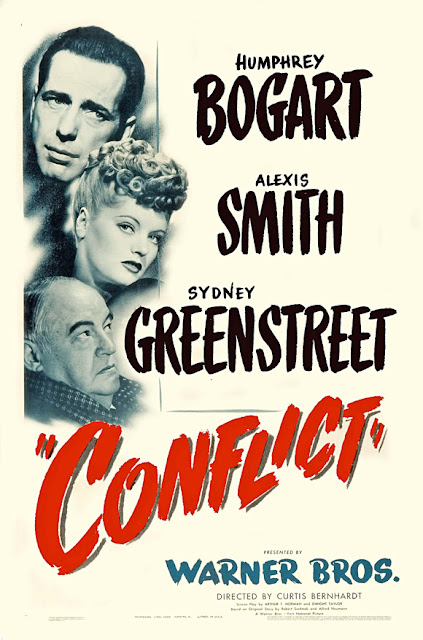 No one is going to accuse Conflict (1945) of being my new favorite movie.

It played a few weeks ago on TCM's Summer of Darkness, and I recorded it as I always like Sydney Greenstreet, but hadn't seen (or heard of) this movie.

As host Eddie Muller explained prior to the film, the movie disappeared in part because it's not a film in which Bogart plays the hero, even if he is the focal character and, in that way, the protagonist.  But he's a protagonist who has fallen out of love with his, admittedly not-terribly-fun wife and in love with her sister (played by Alexis Smith).

In order to clear the way to the sister, Bogart works out a pretty good plan to murder his wife (I mean, credit where it's due) while everyone believes he's not even ambulatory thanks to a car wreck.  From here, things get messier and messier, despite the fact that the entire movie feels like one long, telegraphed, inevitable conclusion.

Greenstreet actually plays a nice guy, so while I was delighted to see him...  you know, it's not going to be anyone's favorite Sydney Greenstreet performance.

Not exactly a forgettable movie, but one that feels well worn, plot wise, and certainly lacking in tension both due to the inevitable ending and because... really...  like a lot of movies, they sort of missed the whole element of people acting like people.   Though someone's wife and sister is missing, no one grieves, particularly.  No one is inconsolable and out of their minds.  Instead, they take a jaunty trips to the country and go out for nights on the town.   I dunno.  I don't need gnashing of teeth, but it almost seems like everything after the action of this movie and the horror Alexis Smith's character will feel upon learning the motives for her sister's murder, should have been included.

It's so weird that grieving rarely shows up on film in any significant way in so many movies, both then and now.  But especially in a movie shot during a war.

I do like the windy plotting and Bogart is actually very on point in his acting here (he's so much a presence, sometimes I forget the man actually can act).  But, Alexis Smith doesn't do much but look pretty, and everything else just feels like snapped in parts of a build-it-yourself plot and movie. 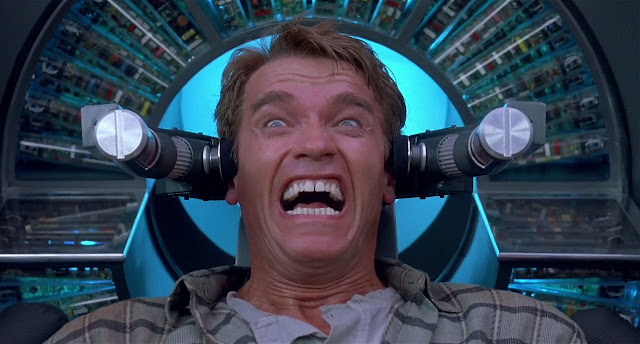 Sadly, this is not a new Calvin and Hobbes strip

Can someone please confirm that this is all new?

edit:  In a month when we got back Bloom County and with Watterson ghosting some Pearls Before Swine last year, literally anything seemed possible. It is now apparent this is not new Calvin and Hobbes.  As you were.
Posted by The League at 7/30/2015 10:33:00 AM 2 comments: 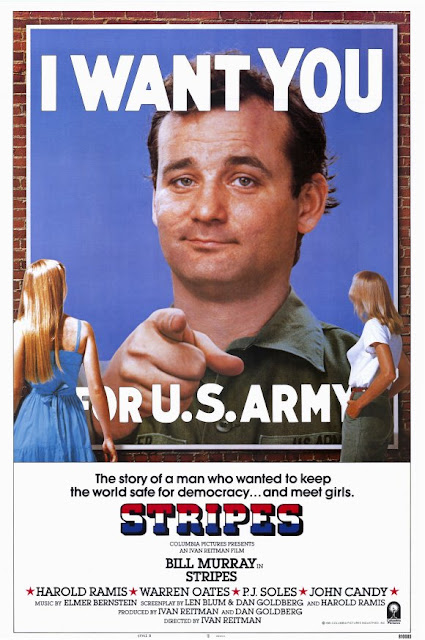 I didn't see Stripes in 1981 when I was six.  I know I was in middle school, and I'm pretty sure I watched this one sometime after my dad figured out I could watch an rated-R movie with him without blowing our cover when it came to the content of whatever it was we were watching.  After all, both of us knew The KareBear could be a little sensitive about language, violence and nudity in movies, and Stripes provides a bit of all of the above.

The movie is from an era in Hollywood when they were trying out these SNL alums as movie comedians and releasing the Second City performers into the wild.  It was also the era when female nudity made its way into movies in a big way, with a seeming prerequisite for many a comedy to include unnecessary shower scenes.

So, hats off to us, Dad, for silently agreeing to not discuss the many topless scenes in this movie with Mom. 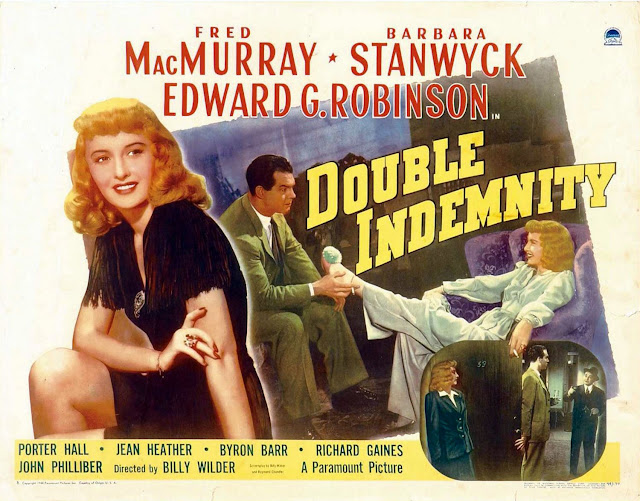 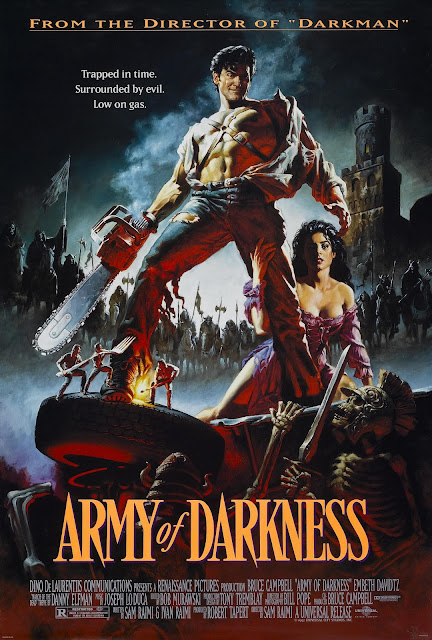 The first time I saw Army of Darkness (1992) it was mostly context free.  My brother had seen Evil Dead 2, liked it, and said "oh, that Army of Darkness movie is the sequel.  Cool."  And that was all I knew.  And with all the knowledge I had about Evil Dead 2 stemming from the cardboard VHS tape cover and the name, I had assumed it was yet another monster-horror-straight-to-VHS movie of the era, and those weren't my thing.

But then some family friends came into town with their daughter who was in, like, 8th grade, and I was a senior in high school and I was told "take Amanda to a movie" because the adults wanted to talk and pretty clearly Amanda and I had nothing to say to each other.  So we drove over to the cineplex to see what was showing.  I don't recall if she had any opinion as to what we should see, and it's not too likely I cared if she did or not (I was 17 or 18).  Thus, I bought tickets for Army of Darkness, because it was showing and the dude on the poster had a chainsaw and was fighting skeletons or something, which seemed a good sign to me, at least.

For the run time of the movie, I laughed like a lunatic in a half-full theater populated with people who seemed pretty sure I was watching the wrong movie.  They were there to see a serious action-horror movie, and that seemed to be how they were taking it until, I'm not sure - maybe the "tiny Ashes" scene?

I loved every last minute of it.  But I also knew - this was not going to be a movie for everyone.

Shortly afterward, I wound up in college.  On my new dorm floor, I ran into some fellows I'd known from my first high school (I moved from Austin to Houston summer before my sophomore year in high school, hi Mike and JAL!), and - given the relationship I'd had with these guys the first go-round, in about thirty seconds of conversation, we learned we'd all seen and loved Army of Darkness.   I don't even know how it then spread around my floor Freshmen year, but pretty quickly everyone had seen it.  And at Halloween, UT had a showing of Evil Dead 2, which, clever me, I brought a date to see.  I'm pretty sure my enthusiasm about the movie didn't help, but my follow up of making her watch The House on Haunted Hill (the original, Vincent Price version) more or less killed any chances there.  All for the best, as Jamie has been a fan of much of Raimi's work and quietly just ignores most of the rest of my vintage horror thing.

Anyway, I'm in no way objective about Army of Darkness.  I don't know how you could be.  In the way of a pre-internet things-that-worked-for-a-small-audience, the fans are quietly cultish but give knowing nods.  Some of my greatest pleasure in the first two Sam Raimi Spider-Man movies (two movies I still think do superheroing better than most of the last 15 years of superhero movies) is when you can see him deploy some of those same directing tricks you know from Evil Dead 2 and Army of Darkness (the Dr. Octopus' arms come alive scene is just classic Raimi).

And as much as I like the Three Stooges pastiches, the wicked good camera work and editing, the melding of horror, comedy and cheese...  Man.  Who can you not like Bruce Campbell?  The man is a national treasure. 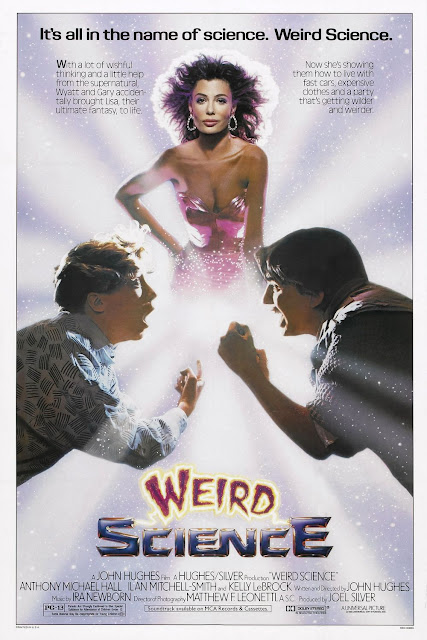