Countdown to Info on MonkeyBrain Comics 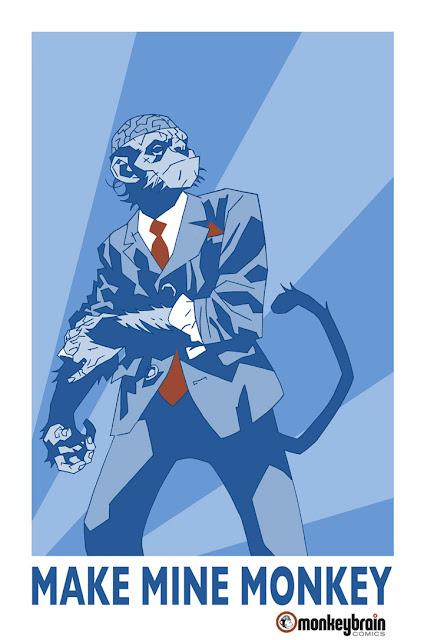 Hey! It's Me in the University of Texas Library Newsletter! Talking Comics!

A while back I was hanging out in the office of the Communications Officer for the UT Library.  I like to go in there both because Travis is hilarious and also because he often let's me take promo items like pens and whatnot.  Anyway, I was hanging out and Travis asked if I'd be interested in participating in their usual feature for the official newsletter for the UT Library where they ask a librarian to talk about some books they like.

Well, I'm not a librarian, but it's not like I can't read, and lord knows I'm not going to not give my opinion if asked.  "Can you walk about comics?" asked Travis.


"How many thousand words?" I asked.


Apparently they keep asking librarians this question, and they tend to get a lot of the same sorts of columns.  The Hail mary desperation play: ask the guy with the Superman poster what he thinks folks could be reading.


So, this quarter it's yours truly on Page 10 of the UT Library Newsletter.  "Ryan Steans Recommends".


I tried to mix it up a bit by mentioning different kinds of comics: biography, memoir, sci-fi, superhero...  We'll see how I did.

And, yes, Longhorns, that's me in the stacks of the PCL where I work everyday.

I'm in Chicago.  We're staying right off Millennium and Grant Park in a beautiful hotel.  I feel very, very lucky.

The hotel was built in the 19th Century and is next to the El, so you can hear the rumble of the trains very lightly every few minutes.  Also - the El is amazing.  Texas: get with it on public transit.

We're taking it easy as we go.  Today we walked around the park and Buckingham Fountain, and then walked to the Field Museum (home of Sue the T-Rex) where we spent several hours and saw maybe half of the place.  We walked back, rested, then went for dinner.   Feeling jolly, we walked over to Millennium Park where we saw The Bean, some fireworks and a live broadcast of the Chicago Ballet which, apparently on Wednesdays in the summer they show on a huge screen in the park.  For free.  The place was packed.  Wrap your head around that, Austin-which-likes-to-pat-itself-on-the-back.

Oh, and the stage and area where this was shown, designed by architect Frank Gehry.  Just because.

Tomorrow:  The Aquarium and Planetarium.

I appreciate the food suggestions, but we're somewhat limited by the fact that Chicago is absolutely enormous as a city, and we're mostly trying to walk.  Based on our location, we can walk many directions and have many options, and so far, so good.

You won't see us doing 20 things in a day because that's not really the plan and we're not trying to rush.  The goal of this vacation was to take a vacation, so we're in the Windy City to take it easy.

Plus, give Jamie a break.  Girlfriend is on dialysis.

A Reminder: I am in Chicago

As of this evening I am in Chicago. 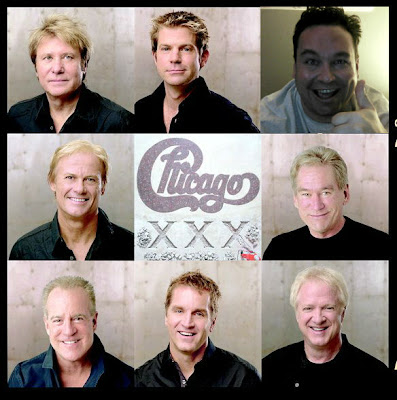 This is a pre-written post, so it's possible my plane exploded or I got lost and took a wrong turn at Albuquerque.

An Open Letter to NBC as The Olympics Draw Nigh

This evening I tuned into some pre-Olympics coverage.  Coverage of time trials as young Americans in Omaha, Nebraska who had been working their whole lives (or some short period of time between adolescence and now) to become world class athletes competed against their countrymen in very silly activities like seeing who can swim fastest for400 meters, but changing directions something like 8 times to do so (just imagine if we asked 400 meter runners to keep changing directions.  I'd watch that.)

As we do every four four years, I saw Andrea Kremer hopping about in a golf shirt (a sports-casting garment reserved just for the Olympics.  Why is that?), trying to interview hairless, genetic freak men with excellent musculature.  I can see why anyone for whom that's a thing would be as excited as Ms. Kremer.

I also noticed the color commentators relishing the opportunity afforded them for a few weeks every quadrennium to seem something like relevant, instead of finding themselves filling time on CNBC at 3:00 on a Saturday in February.  They seemed very interested in odd minutia about very specific individuals, talked about how the nation's hopes were pinned on this seventeen year old girl who is supposed to swim faster in a switchback fashion than other people, and then had very little nice to say about her once she was in the water and not breaking laws of space and time.

If I may:  Planning a meeting or a conference or even a party takes an incredible amount of work.  I get this.  I do stuff like that often.

You work and work and work to get to the event, you struggle through it, and then its over and all you want to do is celebrate.  The last thing you want to do is show up again on Monday and consider what maybe you could have done better.  I also get that when only do something once in a while, say, every two to four years, its hard to remember what worked and what didn't and get better at doing what you're doing.

A Round-Up of New and Old Items

I wound up posting a lot over the weekend.  Partially because we mostly stayed home this weekend in an effort to save a few bucks before we hit the road.

Movies:
Superman Vs. The Elite - DC Animation's latest offering.  The conversation spun way off from just talking about the film itself and got into some other contextual history and perspectives on heroism.
Desperate (1947) - we tried to get back on the noir wagon with this 1947 movie featuring a young, burly Raymond Burr.  We turned on the movie within 15 minutes and just clung on for dear life for the 1:15 running time.
Rebel Without a Cause (1955) - We caught the original teen picture for the first time in 20 years.  It holds up just swell.
Jimmy Stewart Double Bill:  Anatomy of a Murder and Harvey - Stewart in two terrific movies at opposite ends of the spectrum for audiences.

Ephemera:
The Dug provided us with a picture of himself and Jamie meeting Donald Duck circa 1981. 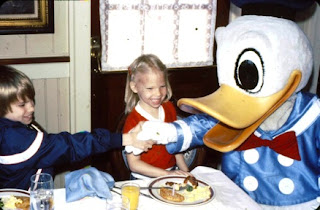 The latest release from DC Animation's feature group is an adaptation of the Joe Kelly penned, Doug Mahnke penciled issue of Superman, #775, actually somewhat known by the issue's tile of "What's So Funny About Truth, Justice and the American Way".


For simplicity's sake, the movie has been retitled Superman vs. The Elite, more or less letting the casual observer that this was Superman in a super fight against a bunch of punky superheroes and that they're in for big Superman fights, if that's what they're looking for. 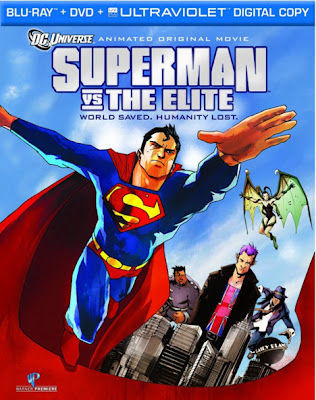 At the time of the release of the original story in the comics (a single, double-length issue), for a number of years Superman had been dwindling within the DC Universe as a featured player.  In an era of trying to make superheroes "realistic", the idea of a guy with incredible super powers, a flying dog and who disguised himself with a pair of glasses didn't fit with what the aging fans of comics, guys who were into Schwarzenegger movies, saw as the proper mode for an action hero.  The sort of Roy Rogers take on Superman that had been his primary mode of existence wasn't working very well for an audience that was turning to Reservoir Dogs as it's idea of an action film.