Well, this just doesn't inspire much confidence or say "Galactic Guardian" to me.  Looks like promo images for Halloween costumes are already making their way to buyers, and costumes from the summer film Green Lantern are making the rounds.

First:  That is not the actual head of the guy on the left.  That dude's head is way out of proportion, and his body is lit and colored much differently than his head.

Second:  Good lord, why did you paint abs onto those sack-like outfits?  Its just a reminder of what is not happening under the flame retardant material.

Third:  The white dots on the fellow on the left make it seem as if he's supposed to be an animal of some sort.

Our Valued Customers reminds us:  Don't be That Guy

Regarding the Green Lantern Movie Trailer: 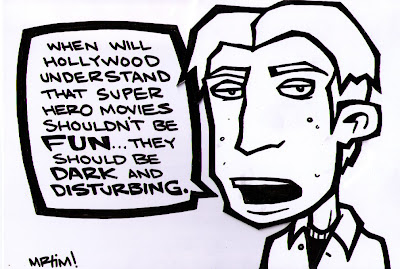 Green Lantern Trailer is Up

...and now comes the part where we find out if anyone but comic geeks are going to care about Hal Jordan and his space cop pals.

In all fairness, this sort of looks like Geoff Johns' Green Lantern with a fine layer of Ryan Reynolds cheese. Its going to take some doing to get used to a Hal that's Hollywood's version of a smart-alecky wise guy rather than the comics' teeth-gritting semi-smug hard-ass.
Posted by The League at 11/16/2010 09:24:00 PM 5 comments:

The guy who spent no small amount of change on a replica of the lantern so he could say he had the same lantern as John Stewart and Hal Jordan is a little befuddled by the redesign on the Lantern for the new Green lantern movie, but the movie fan in me thinks this will look really cool on the movie screen.

After seeing "Identity Discs" from Tron that light up and make noise available in the toy aisle at Target this weekend, it just occurred to me that I'll likely be able to buy an official GL Lantern for, like, $39.99.  And so will little kids on my street.  That is so rad.  Anyway, I was sort of wondering how "toyetic" Green Lantern would be, and I mostly assume they're counting on kids collecting figures of various GL's. Now I can kind of see how this will play out.

It seems that the movie's designers gave a little more thought to "other wordliness" than John Broome and Gil Kane did in designing the Silver Age Green Lantern and his world and gear.

Would I have preferred they keep it all very classic?  Sure.  But I can't complain when that is clearly green and a lantern, even if it lacks the usual "Coleman Lantern" look I'm used to.

Anyway, part of why I got back into this gig was to track the production of the various DC movies as they came to fruition. Its fun to see this stuff as they decide what to do translating it to a medium that doesn't require simplification as artists render and re-render the same objects.
Posted by The League at 10/18/2010 05:49:00 PM No comments:

man, I hope this isn't just someone pulling my leg.

My only surprise is that the eyes aren't black and red, but... whatever. 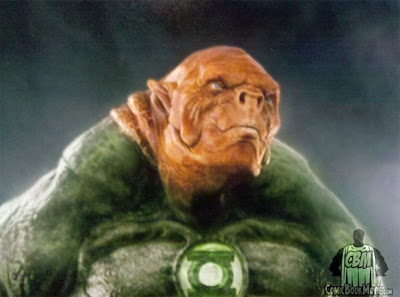 So, Kilowog is this big, hippo-like guy who is sort of a drill sergeant for newbie Green Lanterns. He lovingly refers to them as "Poozers". Its hilarious. Trust me.

Looks like they kept the look intact, and that's no mean feat. It also speaks well that DC is likely keeping their hands in the mix and that we can expect some fidelity between comics, cartoons and the new movie.