Disney won't call the movie by a decent title, so I will.  Let us call it John Carter of Mars, shall we?

As pointed out recently by The Alamo Drafthouse, the Summer of 1982 was an absolutely stunning summer for movies and culturally defining watershed for Gen X.  To celebrate this fact, Summer of 2012, they're having a Summer of 1982 celebration showing a movie per week from that year.

Not all of the movies were a smash at the time (see the final show of the summer, Blade Runner), but this was also the generation of the VCR and HBO.  I didn't see Blade Runner until 1988 or so, but I know when it was released (and you can bet I'll be fighting tooth and nail to be at the screening at the Alamo this summer).

So I'm going to start using Summer of 1982 as a sort of yardmarker for a movie I think could hold a certain distinction.

1.  The movie isn't being loved by critics who are failing to understand it at the time
2.  It likely won't be understood by the mainstream audience at the time
3.  The movie tries to be something grand, really swings for the fences
4.  The movie has the potential to endure in a way that surpasses just the nichey fans you can find anywhere on the internet, but becomes part of the sci-fi geek zeitgeist


The movie is based not just upon the Edgar Rice Burroughs novel, A Princess of Mars (1917), but on what I'd guess are a few of the Barsoom/ John Carter novels sort of pulped into a single volume.  That the movie was not just the first book is all right.  The story works well enough and moves at a better pace for the kids that were packed in all around us in the audience at the Alamo.

The movie of John Carter follows Carter (played more than ably by Friday Night Lights alum Taylor Kitsch) as a Virginia gentleman who, more than a decade after the Civil War, makes a hasty call for his nephew, Edgar Rice Burroughs, to come to him.  By the time Burrows arrives, Carter is dead, sealed in a tomb which can only be opened... from the inside.

Reminder: "War of the Worlds" (1953) showing at Alamo South on Saturday

SimonUK reminded me today - the Alamo Kids Club is showing the 1953 version of War of the Worlds at Alamo South on Lamar on Saturday.

You can see info here.

The showtime is 11:45, but I'll be there a full hour early.  Why?  The show is free!  And that means lots of folks come early to ensure they get a seat.

If you've never seen the 1953 War of the Worlds, its an incredible movie.  I like it enough that my b-day present to myself this year was a scale model of one of the Martian ships.


I confess, I find a bit weird to show this to small kids as I remember it spooking me a bit even when I saw it in 6th grade (I was not raised on horror movies and was a sensitive child, I guess).  But the effects are fan-freaking-tastic, and the aliens are not kidding around with their plans to heat-beam us all into smithereens.

I hope to see you there!

I am a fan of cartoonist Berkeley Breathed. His strip, Bloom County, was a favorite when I was hitting an age when I was scanning the page for more than just Slylock Fox, and I still enjoy the occasional Bloom County collection.

A while back, I picked up Breathed's children's book Mars Needs Moms, and it was a fun read, if a bit off-beat for a story aimed at kids. And then I heard it was being adapted to a feature film by Robert "I Sucked the Soul Out of The Polar Express" Zemeckis.

The thing is - Breathed's character style and sentiment is distinctly Breathed's. And, somewhat shockingly, unlike Polar Express, Zemeckis didn't seem to feel any attachment to Breathed's artistic style. 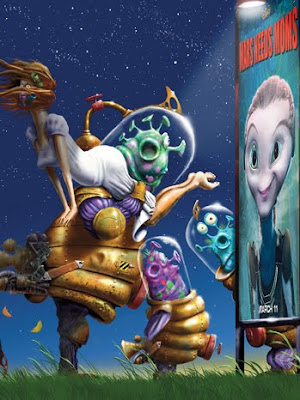 Its hard to really explain that Breathed's character design is part of the story, and so abandoning that design for the movie's humanoid, motion-capture friendly designs....  missing the point.

Look, Breathed's story may be a little scary for kids: its about a kid who sees his mom getting kidnapped by aliens after he's decided his mom is mean during a typical kid/ parent spat.  But the point of the story is to teach kids about sacrifice and explain to them exactly how much their parents love them.  Frankly, its not a bad thing to share with kids, and nobody is going to walk away scarred from either a picture book or movie about the depths of a parent's love.  Its called putting a conflict into a story.

Breathed's Mars Needs Moms is a slim picturebook, light on text and full of imaginative imagery.  Simply covering that scaffolding in typical "family movie" hoo-hah is going to do little but distract from and muddle a pretty straightforward story, and the only time I've seen it truly work was with Where the Wild Things Are.    Unfortunately we all know studios have a certainly saccharine version of reality they deal with when putting together family films, and it may be that adding spunky teenage Martians or whatever the hell the movie chose to do from the Hollywood Plot-o-Tron merely diluted the film to a nonsensical mess.

I'd guess Zemeckis and Co.'s insistence on the motion-capture technology took precedence over the exaggerated and intentionally absurd visual style that's been Breathed's trademark since his days on The Academia Waltz.  Trying to make the characters move and look "lifelike" was never the intention of Breathed's style, and its hard to imagine exactly why a decision was made to stray from what would have been a pretty unique and fun adaptation of Breathed's work.

I'm hoping to read Breathed's reaction in The Hollywood Reporter, even if I have my doubts that we'd get the full story or what it feels like to watch your much-loved book turned into something completely different on the screen and then watch that movie flop.  Or... we might.

I guess if there's any point to this post, its that a massive flop of a movie shouldn't reflect poorly on the source material, especially if the source is more or less ignored in favor of whatever the heck the producers feel is more fun to play around with.

I Heart Marauding Martians: War of the Worlds

I was going to write a post about how much I like War of the Worlds, but then I realized:  I have been doing this a long, long time.  I bet I already wrote something on that.

And then I thought:
League, you clever bastard!  You're good looking AND brilliant.

Previous War of the Worlds posts:

Lo and behold, there you go.  Two posts to refer to.  And I'm still a fan.  I was looking at my copy of the DVD and realized I hadn't watched it in... oh, two years or so.

Perhaps I respond to the movie because (a) the radio play freaked me out when I first heard it, knowing exactly what the story was with the broadcast, not to mention I was listening to it on cassette, and (b) because I recall watching the movie with The Admiral and being too old to be genuinely scared by movies, but realizing this was really one of the first films I'd seen where "we" lost.

All that aside, some of what's nifty is in the details. I still like that the martians in the 1953 movie are truly non-humanoid (unlike, say, Klaatu).

They also don't come with a message to save us or demonstrate some sort of enlightenment. In fact, they basically show up with canisters of Humans-B-Gone.

I haven't read enough criticism of the book, play or movies, but when I read the book and watch the movie, I can't help but think that the Martians more or less follow the pattern of colonization that humans have been fond of for our long duration, something Bradbury explored in the unrelated Martian Chronicles, which witnesses mankind slowly colonizing the Red Planet.  Wells' martians aren't as stupid and slow about their "colonization", arriving in gas-spewing, death beam projecting blitzkrieg, but the idea is the same.

Land:  they aren't making more of it. And on a gut level, we kind of understand the terror of clearing out the locals to make way for our strip malls and Tasty Freeze franchises (or whatever Martians ultimately planned to do) because that's what we're really good at. Just, you know, the audience reading the book hadn't been on the receiving end in quite a while.

And these sorts of fables stick with you, I suppose.

I'm also a huge fan of the design of the Martian vehicles as designed in the book (at least how its described, which is @#$%ing terrifying, and which Spielberg sort of got right), and while they couldn't animate the tripod legs for the 50's-era film and so made the vehicle a hovercraft, it's still totally rad. One day I shall own a model of the Martian invasion crafts.  Oh, yes, I will.

The opening scenes in Grover's Mill (in the radio broadcast and movie) are epically freaky as humans try to apply reason, goodwill, etc... and are met by (spoilers!) deathray.  From that point on, things just get worse, too.

There have been a few nifty cross-overs for fans like myself.

As you know, Superman appeared in 1938, the same year of the "War of the Worlds" Mercury Theater Broadcast.  Somebody ran some numbers and put this out a while back, which I thought was a nifty read.

And for those of you who've never read it, League of Extraordinary Gentlemen Vol. 2 is basically the LOEG v. War of the Worlds.

This little post sort of suggested further exploration of War of the Worlds in comics, so I amy need to look into that.

For some serious weirdness,look up Jeff Wayne's prog-rock musical thing of War of the Worlds.