Human Desire is listed as 1954, directed by the great Fritz Lang, and is sort of a Double Indemnity meets Narrow Margin meets The Postman Always Rings Twice meets...   Still, I don't think its fair to say that Human Desire is a throwaway movie just because you can see the movie wearing its influences on its sleeve.


The plot is a bit convoluted (aren't they all).  Grahame plays Vicki Buckley, the wife of a railyard junior manager who has lost his job.  He asks her to look up an old family employer of money and influence, and only after Vicki returns from securing the job does her husband, Carl, realize that Vicki and Owens may have had a past.  Things get murdery on the return train, and with incriminating evidence in his pocket Carl holds Vicki's fate in his hands.  However, Jeff Warren (played by Glenn Ford) works for the train company, has a run in with Vicki on the train, and slowly begins to piece things together even as he falls for Vicki.

Lang puts his stamp on the movie, incorporating trademark play with shadows and swashes of light, and in the tradition of the movies I'd mentioned above, it fits the bill for noir with any number of checkmarks including the disintegration of the everyman at the hands of sexual desire.  And, really, that's the hook of the entire story.


If I were to pick one thing that made the movie a bit of a standout, its that somewhat like Hayworth in Gilda, Grahame's Vicki is both victim and conniver, innocent and seductress.  Even when she's using less than scrupulous means to get something, its hard not to believe that she's at least partially honest.  And its that vacillation between right and wrong surrounding Vicki, Carl and Jeff, even with a murder in between them, that makes the story a bit different from, say, Double Indemnity.  Rather than simple corruption, its a sort of moral purgatory that seems to consume the characters.

Grahame gets an unusual amount of screentime in this one, and its a welcome difference.  On a simple read, I suppose its easy enough to see Vicki as the femme fatale, but her motivations from even before the film starts are mostly standard issue desires, and its circumstance and situations beyond her control that lead to the climax of the film.  The character simply isn't as likable as her role in her other co-starring film with Glenn Ford, The Big Heat, but she makes the most of a complex character. 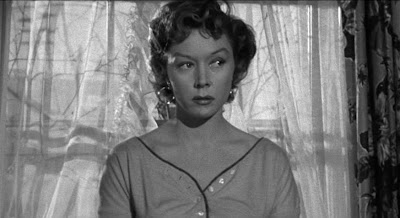 Ford may have never committed fully to the pit he's supposed to be sinking into, and seems content to play the hero in a role that doesn't really demand it.  Curiously, in key scenes he does seem in tune with the material, so its an interesting noir schizm to see the lead merrily getting suckered into a bad corner without the "damn the torpedoes" look that comes with chasing a woman you know is going to wind up getting somebody killed.

Did I like the film?  Absolutely.  the story was tightly told, the characters believable, the setting and types of characters a bit fresh, and as I had Gloria Grahame on the brain, the timing was excellent.  I'd like to give it another whirl to see what I missed, and I'm sure some enterprising RTF scholar could write a whole paper on trains as symbolism of some sort as Lang frames them and uses them throughout the film.

I watched the film as part of a set Jamie got me for my birthday, Columbia Film Noir Classics 2.  The movie also comes with a short documentary.
Posted by The League at 4/18/2011 10:09:00 PM