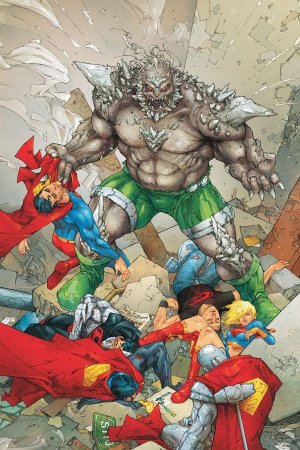 Look, this is a chapter in the multi-multi-part story we started talking about when it was still called Reign of Doomsday.  I didn't like the first several chapters, and I'll stick with my story that the first several chapters could have been done in about 1 issue instead of spread out all over creation.  But with issue #900, DC handed the story to Cornell, and from there this thing has taken off like gangbusters.

It's also very hard to talk about as a complete story as this issue represents more or less a sequence in a much larger story.  Fair warning, I suppose.


As the entire DCU gets put a bit on hold while we lead up to September's Big (Mysterious) Things Happenin' in the DCU at the conclusion of Flashpoint, it sure doesn't hurt to have a straight up adventure, especially one bringing together the first real Team Superman adventure I can remember since... gosh, 2003?

At this point, Superman has joined his pals (Supergirl, Steel, Superboy, The Eradicator and even The Cyborg Superman - still in villain mode, more or less) to take on the threat revealed last issue - that this alien craft is both massive/ pocket-dimension-endless and filled with clones of Doomsday.  The clones are custom designed to mimic Superman's colleagues and specialize (in Luthor fashion) in taking out their own equivalents.  Its a pretty bad scene for anyone in an "S".

The team has also uncovered the inert body of Doomsday.

This is one of those times when you see what direction DC is now taking with Superman, either by editorial direction or by writer Cornell's innate sense of what makes Superman truly a different kind of superhero.  Faced with leaving behind the abused, broken original Doomsday, Superman insists that the team not just flee when the Doomsdays appear, but that they also rescue the very creature who "killed" Superman back in the Death of Superman storyline, and who has plagued Superman endlessly since.

Look, by and large, I find Doomsday to be interesting in a Superman comic only up to the point, which translates to something just below ambivalence when I think about the character.  Doomsday has always been poised as more of a force of nature than an actual character, and there's no doubt that writers have struggled to find an angle to make him/ it more interesting.  In this case - I don't blame anyone for choosing Doomsday.  The story isn't about a supervillain's nefarious plot, its about Team Superman gelling in the crucible (and, this is one chapter.  The story isn't done and I want to give it the remaining issues to breathe.)   I do suspect Cornell is struggling a bit as this chapter reads a bit like cobbled-together parts more than a self-contained issue, but I liked those parts, and I liked what I see happening with the cast and characters.

This is maybe a topic for a full and separate post, but I don't want for Superman to fall into the trap where the character is defined by his villains or less interesting than his villains.  Yes, Batman has the best rogues gallery (and Flash a pretty good second), but with 12 straight issues of Luthor and how long away from his own title (with Mon-El, etc...), it seems appropriate that we have a villain or plot that allows the spotlight to focus back on Superman and friends.

Its an amazing bit of insight into the character that I'd guess many, many other writers wouldn't have gone for.  I'd guess its hard to overcome rationalizing the pragmatic over the super-heroic, and that's okay with most other characters, but it feels right when Superman makes the choice to put himself at risk in order to uphold an ideal (and when he asks the same out of anyone wearing the shield).

I'd look back on issue #900, where Superman sees the potential for the good Lex Luthor can do, having obtained nigh-godhood, and is willing to tell Lex he's to blame for all of Lex's unhappiness and take whatever punishment Lex can dole out if Lex will do as he's always said he'd do and be the real super man.

Add in the scene in the second page where Superman disables Cyborg Superman so they can have a moment to think without the Cyborg's nihilistic chatter, and...  you know, this is very much a Superman I like to see.

Cornell also seems to have the ability to efficiently convey the personalities and roles of Team Superman, and that's pretty nifty.  Longtime readers may know I'm a bit of a Steel fan, so the possibilities for bringing Steel back to the DCU is any capacity is a welcome sight in my book, and I'm always glad to see him slide into the role Morrison provided him in JLA as a guy just astoundingly smart, and very understated about his gift.

...annnnnd...  for the folks who were dissatisfied with how Goyer's short story The Incident from Action 900 played, there's a pretty great scene about 3/4's of the way into the issue which I think may be the opening chords of Superman's restoration as an American but reinforcing Superman's role in saving the Earth.

The issue is a much better chapter than many that preceded it, and I'm very happy to see what direction Cornell is taking Big Blue.  It may be summer-movie-blockbuster action with little impact on the future direction of Superman, but for now, and after the past few years of Superman comics, its nice to see a change in tone.

As a rule, I won't spoil to much in my discussions, and so its a bit tough to discuss two major developments to the plot of this issue, both which have that "blockbuster action movie" sort of appeal to them, and I look forward to seeing how these things play out next issue.

On the topic of art:  Kenneth Rocafort's work is fairly solid, a sort of second generation from the style of Leinil Yu, and as Jesus Merino picked up a few pages, its an interesting mix that actually flows better than you'd suspect.  I wasn't a huge fan of the color palette, which I often found murky, even if I understood these scenes were occurring in the dimly lit corridors of an alien vessel in deep space.  It just didn't blow me away.

Anyhow, great to see this story take a sharp turn for the better, and to see what direction Cornell is going with Superman now that he's got his hands on the Man of Steel.
Posted by The League at 5/26/2011 10:48:00 PM