So, yeah, then Sunday we went for breakfast at Kerbey Lane and followed that with Holiday house decorating.

I am fairly pleased with the results, and thought I'd share.

Sunday we exchanged Christmas gifts as Dug and K will be in North Carolina for Real Christmas, and then in the evening we ventured forth and saw The Muppets.

In the manner of the best Muppets work, the movie likely works for kids, but its really an all-ages movie, aimed at everyone from kids to nostalgic adults to young adults who haven't seen much in the way of Muppets.

I am not one of those people who wears a "I Appreciate Muppets on a Much Deeper Level than You" shirt, but I grew up with Fozzy and Kermit on my TV. I saw the original movie in the theater. I expect we'll break the fourth wall routinely.

I didn't really expect to like the movie as much as I did, but there you go. And it wasn't just because the film featured softly lit shots of Amy Adams.  Its very smart, aware of its history without trying to live entirely off past history as I'd argue recent Muppet films have done.  Its a musical with clever numbers, little guys pitted against terrific bad guys.  And it actually really does understand what made the old series work in a way that I thought the Henson Company may have forgotten.

No, every single Muppet doesn't get as much screentime as you'd like for their own arc.  It probably works best as a sequel not just to the original movie (heavily referenced), but as a companion to watching at least a season of the original TV show.  But its not necessary.  You just won't get the, uh, nuance of Gonzo, one supposes. 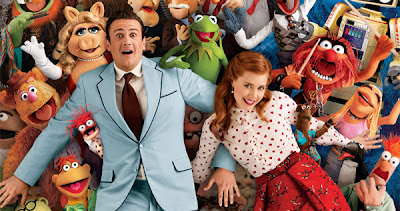