The name Jeff Jensen didn't immediately ring any bells as a comics writer when I looked at who penned this book, but as a writer for Entertainment Weekly I know the name, indeed, thanks to the fact that I cannot remember a time when Jamie wasn't a subscriber to Entertainment Weekly.

Jensen's own father, Tom Jensen, was a detective in the King County Sheriff's Department who was on the Green River Task Force from the early 1980's until the unit was dissolved in 1990.  He continued work on the case right up through the Green River Killer's conviction around 2003. 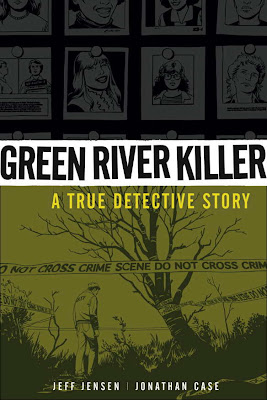 Like a lot of morbid kids seeking a cheap thrill, back in high school I checked out books on serial killers from the local library.  In addition to names like Son of Sam and Zodiac, The Green River Killer was always named as one of the greatest hits of serial killers.  He was called out in part thanks to the sheer number of those he was suspected to have killed and in part because he'd never been caught.  Of course doing a little reading quickly dismisses the whole "brilliant mastermind" scenario of the Hannibal Lecter books.  The reality is that it's hard to catch people who kill mostly strangers and with motives that don't stem from personal grudges, and the stories of both victims and killers are often bleak and tragic.


I do remember my jaw dropping when I heard on the news that the police had caught the Green River Killer, as I'd assumed that the Seattle-based criminal (who had gone dark for about ten years) had died or met some fate that meant he'd never be found out.  Not that I followed the thing closely, but a few spare facts stick with you.

The graphic novel by Jeff Jensen and Jonathan Case doesn't revel in the horror of the crimes, and, in fact, is far more about Jeff Jensen's father and the case that filled his professional career.  But the case was about around 4 dozen deaths perpetrated by a single person, an inconceivably heinous trail left by one person's madness.

Told in non-linear order, the book opens to a disquieting scene I'll not describe, then leaps to the aging cops dealing with the unusual circumstances under which Gary Ridgway, the Green River Killer, was interviewed and dealt with by law enforcement, then bounces back and forth between the decades of investigation and the first week of interviews and evidence provided by Ridgway himself as part of his plea deal.

Case's art is illustrative, capturing the characters, the rough terrain and spartan cube-life of the detectives in clean black and white detail.  The characters are on model, the expressions mean as much as the dialog, and Case never gets cartoony with his approach.  Its just well directed characterization.  By and large, the pacing is actually pretty amazing, with some scenes breathing very naturally using multiple frames for a single beat, while others compress time and ideas, the way better comics know how to do.

There's nothing shocking in Case's art, no experimentation, no wild flights of fancy to get behind Ridgway's madness or linger grotesquely on the bodies (which are show, with some of the morbid punch removed by Case's choice of style in depicting them). 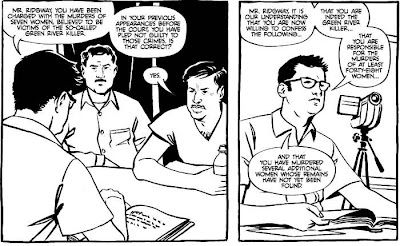 Following Tom Jensen gives Jeff Jensen the opportunity to humanize the men who gave their lives and careers to seeing justice done, even if the victory feels decades too late for everyone involved.  But there's office humor, real characters, and lives going on around the tragedy.  And the duplicity, self-delusion and unassuming megalomania of Ridgway stands in such stark contrast.

Its a brilliant comic, the sort of thing comic shop readers will likely overlook in favor of more capes and tights, and that's too bad.  Of the overhyped events from the Big 2 and the fannish gushing over what I'd consider inferior works from the past year by smaller publishers, this one feels like it has weight to it.  Unpretentious, and with a story worth telling, unlike so many others on the shelf.

I don't read that many non-fiction or "based on a true story" comics, and its a bit of a cheat that I have near the whole collection of Rick Geary's true murder books counted among those, as the material tends to give the true stories a bit of garishness that stuff like Ottiavani's T-Minus: The Race to the Moon do not have. And as much as I like Geary's work, I appreciate the personal angle here all the more.

Someone needed to remember and share the story of the people behind the manhunt rather than just talking about the criminal.  Strange to have the story come in comics form, but I'll take it.

I've read another review of this from another blogger and immediately added it to my list. It is a really odd form for this type of story, but some of my favorites have been non-traditional comics stories. I definitely need to get this one soon.

Unusual because its comics? Maybe. I think with the mix of memoir comics, and a small surge in comics actually dealing with biography and other material intended for a book store audience, it makes sense. I'd also argue that Jensen may have been storyboarding the movie he'd want to see about the case, something he could put in front of producers to protect his father's story.

Hey there. Jeff Jensen here. I really appreciate the kind comments and review here. Please know: This book was never intended to be a means to a movie. I love comics, and this book represents my best attempt to execute comic book storytelling. My ambition was NOT "here's how we do the movie." My ambition was to tell a story the way I could, in a medium I loved.

I sincerely hope I did not offend. I did see this work as a comic first and foremost, and its some of the best execution I've seen in comics (at least to my taste) in recent years. That said, I was wondering if you weren't trying to tell your father's story before someone else tried to do so and was unable to do it justice. And, frankly, (1) who would blame you, and (2) the results are telling. This is a great book.

Your father is a hero, and I thank you for relating his story in an artform I love.