At the Aquarium we saw the requisite sharks, a gigantic snapping turtle, rays, sea turtles, otters(!), beluga whales, dolphins and all manner of other creatures, including blue frogs.  But if I never sit through another "4D" experience, it will be too soon.  The League is done with getting pistons shoved in his back and nether regions and having water sprayed in his face while trying to watch a movie.

The Planetarium had one of the Gemini spacecraft piloted by Jim Lovell, tons of Lovell's personal NASA artifacts, and a great short film explaining to kids that we once used to have cajones as a nation and put humans into space.  This was news to some kids I was standing next to whilst looking at the Gemini capsule.  Their poor mother kept repeating, "No, it's a real spaceship.  We really went into space."  Her dopey kids remained unconvinced.  We're going to accidentally raise a generation of Moon Shot conspiracy theorists.

We went to the hotel, rested up, ate some Chicago style pizza and then returned to the park where I spotted high school chum and Chicago resident, Gene (you Westwood people know the Gene of whom I speak).  Gene is doing all right!  It was great to see him and chat for a bit.

When we left I was bummed I hadn't had Jamie snap a quick pic of my first meeting with Gene since high school.  But, this evening, Gene posted this pic to Facebook: 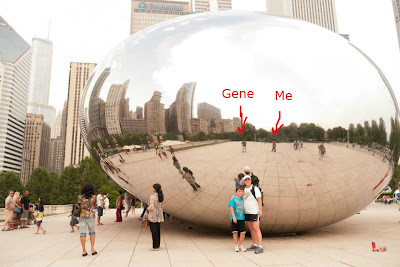 Gene was taking a family photo when I spotted him and wandered over.

It's the magic of The Bean, people.

I actually was trying to see Gene while I was here but wasn't sure how we'd synch up as he has the subjects of the photo there in town and we're on "Jamie Schedule".  So it was amazing to just look over and say "hey, I haven't seen that guy since like 1991, but that's Gene."   And Gene, being Gene, just said "oh, hey," like this happens all the time.

Today we got up at 5:45 and went to dialysis at a very nice clinic across the river, so I got to see the river and the tunnel where the Joker and Batman had a shootout in Dark Knight.

Jamie needed to rest, so I wandered over to the Art Institute of Chicago and...  seriously, you need to see this place.  Absolutely astounding collections from Asia, Africa, Europe and some surprising pieces from Impressionists, 20th Century artists and a great show of Roy Lichtenstein's work which really turned me around on his work.  That, I did not expect.  I saw Hopper's Nighthawks,* Wood's American Gothic, some classic Georgia O'Keefe, and of course, Seurat's famous A Sunday on La Grande Jatte, featured in Ferris Bueller's Day Off.  Some greatest hits:  Van Gogh, Monet (maybe too much Monet), Manet, a few terrific Toulouse-Lautrec pieces, Renoir, Degas and more.  I think there were some Picassos, but I literally got lost for a while in 18th Century European still-lifes and religious paintings and when I popped out, I had to leave.

I'm just scratching the surface here.  It's a must-see for anyone hitting this town.

I then hit one of the locations for Graham Cracker Comics, which is a much smaller store than Austin Books, but which handles the use of space very well and has a great selection.  I found some Jimmy Olsens, a Lois Lane and a couple other items that were nice pick-ups.

This evening Jamie I voyaged down to Wrigleyville where we followed a suggestion from CarlaB and saw The Improvised Shakespeare Company.   Chicago has a rich tradition of comedy and improv, and this was right in our wheelhouse.  Great show.

I stared at that pic for quite some time trying to figure out the joke. Either that, or I wasn't going to say anything because I thought your friend Gene had a strange disease where he actually looked like an 11-year-old. Then I enlarged it... and realized I'm an idiot.

Glad you guys are having a good time. Have fun at the baseball/football/hockey game. JUST joking. I know that's soccer. ;)

The baseball game was awesome. I'm not much of a fan of baseball like you have to be to really embrace the game, but I do enjoy going to a major league game when I have the chance. It's a great way to spend an afternoon.

I have selected the Cubs as my team due to outstanding team loyalty by the father-in-law and because the Cubs are a ubiquitous force anywhere you go.

Sounds like a great trip. All the prerequisite elements were there- good museums, well known comic store, baseball,... Gene.