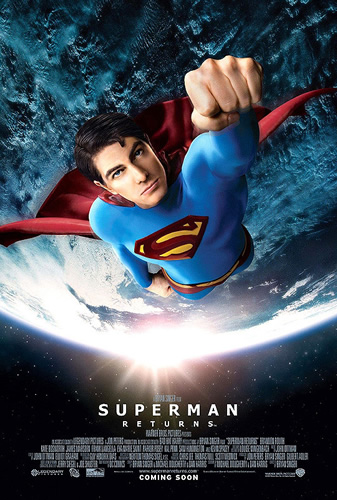 The biggest problem with the movie, I suspect, is that it is not a movie about Superman trying to find a bad guy so he can punch him until he stops being the bad guy.  Ie:  It's not an action film.  I have no doubt this mis-step will be corrected when Henry Cavill puts on the cape in theaters this summer.  We're not going to see Zod in a movie without a pretty good slug-fest in the third act.

I've said it before and I'll say it again - from a story point of view, this is stronger than any of the other sequels.  In some ways, when I consider what a superhero comic story might look like that is actually for adults, the themes and ideas in Superman Returns are a lot closer to that concept than most of the Marvel movies that led to Avengers or Avengers itself.   Faded romance, bastard children, the passing from parent to child, your past coming back at you as a huge, twisted metaphor that you must also metaphorically hurl into space before it destroys the entire world...

It's smartly scripted, but not just in a "look how clever our dialog" sort of way, and every shot and set is beautifully realized (thank folks like Guy Hendrix Dyas).  The movie retains the weird, wacky sense of humor that's been a part of the Superman movies since the Fleischer shorts and Superman winking at the camera (the comics were always pretty winky, too).  The script doesn't do as much as your typical actioner to take you by the hand through the story, but its well written and directed enough that you're never in doubt of character feelings or motivations, though those remain unspoken.

The movie has issues it could have avoided that go beyond the lack of punching.  Kate Bosworth was iffy casting.  Some folks didn't like Spacey as Luthor (Jim).  And you can't help but want to rethink Superman-as-peeping-tom swinging by the White/ Lane household to stare at people through walls.  I've also seen some bonus footage as a premable that was cut for time, but I think was a terrific scene and would have given context to Superman's arc.

Let me be clear:  I give Avengers a solid B-.  It clearly tapped into something audiences across the world wanted to see.  I WANT to see Steve Rogers throwing his shield around next to Thor and the Hulk.  I WANT to see Iron Man fighting aliens on airborne jetskis.  But its also much more the wacky kid's movie than Superman Returns.  Its the kind of movie where our army of villains collapses so the entire conflict will end because of reasons rather than dealing with the whole "invasion" problem they've set up.

That's not to say "if you were as smart as me, you'd like Superman Returns better than Avengers."  It just means the two movies serve very different audience needs, and I am surprised WB went down the rabbit hole with Bryan Singer the way they did to make this movie.  Avengers has far better all-ages appeal, is far more toyetic, and seems to be better conceived as the sort of matinee action flick you expect when you see superhero logos on a movie poster.

Again, we'll see how Man of Steel responds to the issues from this movie and what lessons WB thinks they learned from Nolan's Batman franchise.   But it is funny how Superman movies draw some odd attention.  So far, WB has struggled to find the right words to put around their new take - because "serious" which applied fine to a Batman movie, lit the internet trolls on fire, and "naturalistic" had the same effect.

I am one of the few people I know who liked this movie. The movie gets ripped regularly despite the fact that it got generally good reviews form critics (76% on Rotten Tomatoes). Bryan Singer's affection for Richard Donner's films are clear, which I appreciate because I was worried I wouldn't recognize the character. On the other hand, the film at times seems so caught up in homage for the first two films, it doesn't do much in moving the story forward. I didn't like the whole thing with Superman's illegitimate child, just like I didn't like Superman bedding Lois in Superman II. It just seemed out of character for him. I saw a an interview with Margot Kidder recently in which she expressed some embarrassment and regret with that scene, because it seemed so out of character with what we know about Clark's modest, midwestern values. But maybe I'm old fashioned. In any case, I just didn't think the whole thing with his son worked.

I recently saw I what I think is the smartest and most thoughtful review of the movie. And even though this guy is more critical of the movie than me, I have a tough time arguing with his reasoning.

I listened to the review, and I think its got some great points, but I do think he sort of misses the boat by taking some of the film literally when points were meant figuratively and missing the occasional detail such as how Superman knows Jason is his son.

I do think its a problem with the movie that what seem to be the themes of father/son relationships, metaphorical hurling away of your past, etc... seem lost.

When I was five and saw Superman II, I guess I didn't really think it was that crazy that Superman wanted to smooch the lady while they had the round, shiny bed to take advantage of. Frankly, I don't give Superman's sexuality much thought, and I kind of liked the fact he was married in the comics so we could bypass the whole "Man of Steel Woman of Kleenex" bit.

The writers of SR and Bryan Singer went to huge lengths to get their story of fathers and sons passing a legacy down the line that it required some of the more impractical parts of the plot, such as Superman being gone for FIVE YEARS. Just long enough so you could have a child actor who could follow direction and remember more than a line at a time.

Not all of the choices were the right ones, but this isn't a movie about some of the things the reviewer seems interested in exploring, all of which would have been fine - but which I'm also fairly certain were intended for a sequel that never happened.