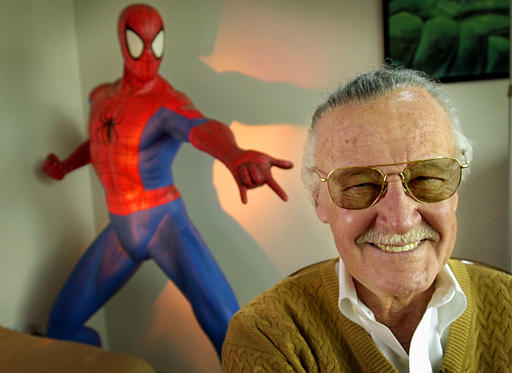 When I was a wee League, I was all about the Saturday Morning Cartoons.  If you're one of my fellow Gen X'ers, you might recall some of the Marvel cartoons that were on during the era, like Spider-Man and His Amazing Friends.  What I recall is that episodes of The Incredible Hulk and other shows would start with Stan Lee breathlessly welcoming us "True Believers!" with a hearty "THIS IS STAN LEE!".  So, for a long, long time (like, since 1981) I've associated the thrilling adventures of Marvel characters with Stan.

And, I'll tell you what else, I read all of Stan's Spider-Man, and it's really good, y'all.  Not to mention how good I used to find the daily newspaper strip by him and Larry Lieber.


It's Stan's 90th, and while the vagaries of reality and business sometimes bump up against the notions of fairness and rockstarness we may have grown up believing MUST be true about these guys who created our fictional heroes, I think Stan is one hell of a guy.

Born in 1922 in New York City as Stanley Martin Lieber, Stan was working at Timely comics for a relative, Martin Goodman when they tried a Hail Mary play to try something different to bring up sales - and that was Stan's approach to superheroing.  And from that, it's not really very hard at all to draw a line to The Avengers as a Billion Dollar Franchise.  Yeah, he did Avengers.  And Fantastic Four.  And X-Men.  And Spider-Man.  And Hulk.  And Iron Man and you name it...

In a lot of ways, I think Stan and his cohorts really did change not just superhero comics, but comics in America in general.  I think he's been the human face for superheroes and comics that it sorely needed at a crucial time, and he really did a lot to seed the minds of us Gen X'ers with cartoons and TV movies that made us believe in these characters before we'd ever bought a comic.

Who the heck knows is Stan is really the guy we want to believe he is?  Maybe Mrs. Lee?  But I tend to appreciate Stan's insistence on remaining Stan, an icon and carnival barker.  A businessman and creator.  A collaborator and pirate.

At this late date in my life, I don't have many heroes, but Stan still fits the bill.  No, I don't pause with awe at his dialog or study his work like I do with Kirby or others, but the world is a tough place to be, and to survive and thrive and still enjoy it at 90?  Man.  Respect.

Stan's post-Marvel projects have had a weird history, but one of my favorite was his reality show Who Wants to be a Superhero? that was better than you'd think.

Also, I love his whole persona.  It's one of the most impersonated voices at our house.  Don't ask.

Stan made a lot of us happy. For realz.