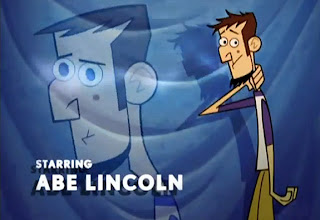 
I like it when super-director Steven Spielberg uses his powers to not make Minority Report and instead makes something that I feel is worth my dollars.  It's tempting, in fact, to spend the length of this post complaining about Minority Report, and as personally gratifying as I'd find that, I'm not going to do it.  Let's just say:  Tom Cruise is annoying.

This movie stars Actual Actor Daniel Day-Lewis.  I will pretty much punch you in the stomach if you do not agree with me that Daniel Day-Lewis is one of the finest actors of the last thirty years.  In Hollywood, he's a rarity as he's not a character actor, nor a pretty face who plays the same role over and over (see: Ryan Reynolds), yet not only does he get work - he seems bankable and improves everything he's in.

He isn't even really a celebrity as you're entirely unlikely to see him appear on the cover of Us Weekly or talking to Jimmy Kimmel about his latest project.  He just shows up - nails it - and goes home.  Everything about him should be completely unmarketable, but the dude has found his niche.  In short, I respect the hell out of the man, and his studied performance of a man we all believe we understand but whom we only know through hazy photos and paintings and sculpture and a few written descriptions provides an entirely new angle on Ol' Numero Sixteen-o.

I know Facebook went crazy with people pointing out that this movie might have some historical inaccuracies (cough.  A movie?  Historical inaccuracies?  Wha-?) hooting that Lincoln didn't care at all about the slaves.  Not really.  I guess those Southern states who seceded did so as part of a big misunderstanding, so, well done readers of out-of-context political discourse.

He may have had to have nuanced discussions, but his stance was fairly clear.

In a way, the movie is low hanging fruit.  For the first time in human history, the culture of legitimate nations does not allow for slavery and hasn't for a hundred years.  You guys, that's a pretty big step when you think about how we used to think one should build a pyramid or harvest a crop.  But what now seems obvious to us (even to most racists, I'd guess) in the context of the argument of the movie places the audience squarely on Lincoln's side while removing some of the inscrutable veil that surrounds the character to others in the context of the film.

Curiously, as we've had the 13th Amendment in place for quite a while, Spielberg does a masterful job of keeping the audience's expectations on edge until the final vote is cast.  That, people, is craftsmanship.  And we all win as audience members.  Unless you want to see a return to slavery.  In which case, @#$% you. 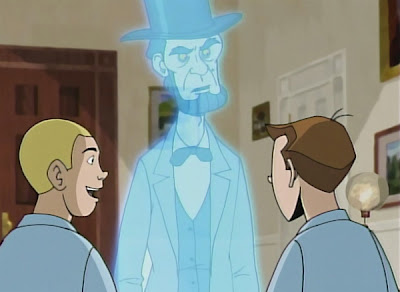 It's not just Day-Lewis who turns up and does a great job.  The movie's central cast includes great performers in almost every role, with stand outs like Tommy Lee Jones, David Strathairn, Hal Holbrook, Joseph Gordon-Levitt, Jared Harris and Sally Field in one of those performances she does where you say "now, again, why doesn't she have two movies per year?"*

The point of the movie may be not just to show us the amazing steps regarding how history is made and the people who were there to make it happen, but in a political system of two parties, continually divided and each certain of their righteousness, someone is coming down on the wrong side of history.  Some will show great courage, some will be bought off, some will see their names with the wrong mark on the ledger sheet.  The unspoken and verbalized connections between the cause of war, the chance to end the war without the source of the war truly addressed - everyone hoping for an expeditious conclusion to see the horrors we brought on ourselves ended - it very much came down to the successful passage of the 13th Amendment.  And it's amazing, in so many ways, that we then enfranchised women in the US with so little blood shed. 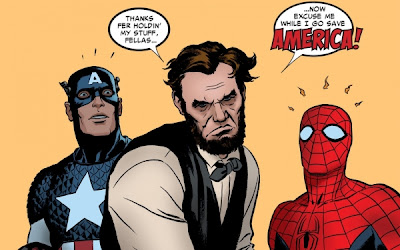 The film can serve as a reminder that none of this seemed any more obvious then than our choices do now.  We're hedging our bets, and, yes, history will judge us.  As cable outlets and paid pundits make money from ensuring the country pushes itself until it frays and breaks, we hope that there are those in the system working as diligently to build a stronger country with no less tenacity.

In a post FDR-era of more formal ceremony around the Presidency, the movie reminds the audience that during this era, the president (even in war time) could walk the dirt streets of DC and had regular intervals at which he had a queue outside his door comprised of private citizens wishing to take a moment of the President's time.

It's still Spielberg, and he's prone to his crowd-pleasing moments and flourishes that work in a movie even if they ring false for how humans actually behave, but it is a movie.  Whether the story sticks close to reality is, in fact, important, but that's on factual details, not on imagined conversations between Lincoln and Mrs. Lincoln.

As Jamie said when we were walking out "It's nice to see a movie where the action takes place through discussion."  And its true.  I love me a good action movie, but it's true that not everything requires lasers or punching.  Or even murder mysteries or the usual drivers of plot, and its heartening to see a story told through dialog and the unspoken cues of the film.

And before we go.  Poor Bob Lincoln.

He was at his father's side when he passed, and managed to be there when both Presidents Garfield and McKinley were assassinated.  That is the worst hat trick in history.

Anyway, I think I had a couple more points, but I can't remember what they were.  It doesn't matter, just, you know, it was probably pretty good.

My only complaint about this movie was that Lincoln didn't kill enough vampires.

And, as my wife keeps pointing out, Day-Lewis seems to only come out of his seclusion to earn an Emmy.