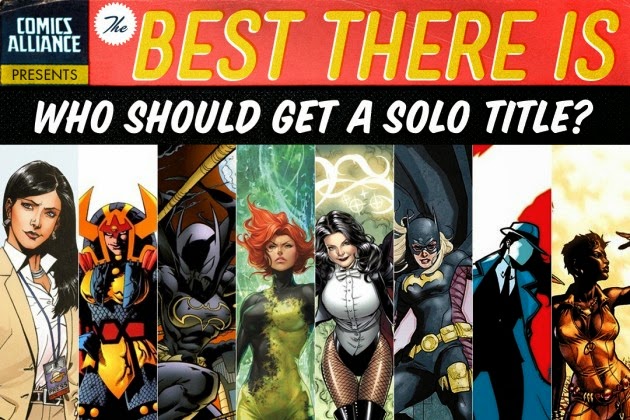 First, let's get this out of the way - I get uncomfortable when the very nature of the poll reflects the tendency of the industry to think of women and minorities as a category that must compete for scraps of tokenism.  I'd have far less of a problem if the question were "which Teen Titan deserves their own feature?", as that's a category that's based in the realm of superhero comics rather than applying deeply ingrained societal issues reflective of the traditional audience for superhero comics.  I certainly don't want to see myself voting on "which black superhero should get their own book?" and I sure as hell don't want to see myself voting on on "which black female character should get a book?"  I mean, yikes.

That said, I also understand that this poll can be read differently, as part of DC's supposed diversity initiative for creators and characters (something I hope is genuine for DC, but, we'll see).  I get it if fandom giddily asks itself - "which underserved character should get their own book next?"

So, let's just say, FACT: women and minorities have not been portrayed as the focal protagonist in solo books in a wide majority of the publications at DC Comics over the past 80 years.  I am glad when this shows signs of changing.  It's possible to read this poll a few ways, and I'll just leave it there.

I firmly believe in a DCU with better representation in both solo and team books.  And I'm not alone.

What I won't agree with is that any of the "characters" deserves a solo book more than the other.  And that's not just BS egalitarianism.  And in that way, I side-eye polls like this, because it mostly just reconfirms what DC already suspects without really ever pushing them to try harder when it comes to the content in their pages as material that's exciting for reasons beyond representation (a worthy thing to laud, but let's not stop there).

For the past five years, DC Comics has tried to quash the idea that creators are the forces behind their comics.  They've put the characters forward as brand items more than actual characters - somewhat successfully if gross sales are an indication, but not really if you consider that they seem to only be able to sell Batman and Harley Quinn as they move into 2015.  Certainly something to be concerned about should either character oversaturate the market or dwindle in interest.

Every one of the characters in the Comics Alliance poll is established and has cachet with the general DC audience who didn't just jump on last year.  But all of these characters have appeared in a multitude of stories over the past few decades, all of them have received various treatments that have made varying levels of sense.  And, if we can get over the "fandom" approach to the Big 2*, what really matters when it comes to the characters isn't the fact the characters exist, it's how well they're treated on the page.

Have they been in good stories?  Were the stories good enough to resonate for a while until the next good story comes along and we're not just churning through the inevitable slide that occurs when we're just putting any old schmoe on the book?  Did the story drive the character in a sustainable new direction?

And, here's the problem in a shared universe driven by editorial management: is that thing you liked replicable, or does it require the handling of specific creators with a specific vision?

DC is still trying to recapture the flames set by Jack Kirby during his brief tenure at DC in the 1970's.  And while I won't say that Big Barda has never been worth reading again since he departed, most certainly the Barda of even the Grant Morrison JLA era was not the same Barda as appeared in Mister Miracle during the initial run of that title (and you can see how awkward it all got in the 1990's with the New Gods title and the extreme-ification of Barda in stories that are mediocre at best).

And that's just one example.  I don't really care about a Renee Montoya Question that isn't written by Greg Rucka.  I've read more mediocre Zatanna stories than I care to think about.  How viable is Stephanie Brown if she's not written by Brian Q. Miller?

That said- prior failure to succeed with solo titles shouldn't really matter for any of these characters.  They're established in the DCU, and while it's certainly not hard to remember failed solo-outings for anyone in the poll, some of these within the last five years, what matters is what comes next.

This is going to be hard for DC.  They seem incapable of selling books that don't feature a few key characters, and the effort put into the New 52 suggests they no longer really know how to move promising writers up through the ranks from smaller books to larger books - at least not without losing them to Marvel.  All of these characters have the same potential to be redefined that DC used to know how to do when Karen Berger was busily allowing creators to make bold steps with dusty artifacts from the shelves.   Grant Morrison got us a viable version of Animal Man, for goodness sake.  And he eventually became the Grant Morrison we love and fear today.

If we get down to brass tacks, some of these characters work in a certain context, and, like it or not, the relationships of those group books is what helps to define the character.  We may have had 20-years of prior Lois Lane solo comics, and I am a certifiable Lois Lane nut, but overall, I'm not sure the comics market really cares that much about reading panel after panel about a newspaper reporter, or Brenda Starr would be a far more recognizable name in 2015.  20 years of Lois comics hinged on Lois being a resident of Metropolis who had a mad crush on Superman.  And, y'all, it often worked.  Removing that tie can be a huge challenge and can water the character down to blandness and a lack of recognizability.  I'm NOT saying it can't be done, I'm saying - prove me wrong.  What does Kirby's Barda really look like without Scott Free/ Mister Miracle?  Don't just give me a generic comic with Barda inserted.  And, for the love of god, don't make it about what Barda looks like stripped of everything that makes her Barda.  Let's establish the characters first.

Who is Mera?  How does she stand on her own?  What is she up to, what does she care about?  How does she go about her business differently from Aquaman yet still want to hang tight with the guy?

What do the Batgirls do when they're not just taking up brain space for people who wish they had solo books?  How is it not a story we've already seen in batbooks 5 million times already?

If you can't make a cool story about Vixen, though, please hang up your writer card.  That character is so ripe with potential.

I used to say "there are no bad ideas, just bad execution".  I still believe that's true.  And I still believe any of these characters are worth a good round of pitch sessions that defy the concept that these characters just write themselves.  Give it to someone who will push the character or who has such a strong vision for who and what they could be (I have to believe Rucka could do at least five years on Montoya), that they'd be worth the price of admission.

I appreciate that all of these characters have their fandom.  And I am sure a popular vote will reflect what that means (Stephanie Brown, this is your test in so many ways).  But I like to think meritocracy of quality of comics means something, too.: That we build these fandoms based on something substantial if subjective.

Am I right?  Am I wrong?  Please yell at me in the comments.

Frankly, put the right story together and I'll buy any of these.  Especially Lois, Barda and Vixen - or Montoya written by Rucka (wink).

*I am baffled by the wide-eyed, sugar cereal approach to pop culture as a Loot Crate-able commodity where everything is as good as everything else as long as it falls within the "fandom"
Posted by The League at 2/09/2015 03:10:00 PM

Here's what I don't understand about you, League. I completely agree with the basic attitude of the post: any character can be good, just write them well! But then, why stick to Big 2 characters?

As you yourself say:

"And, here's the problem in a shared universe driven by editorial management: is that thing you liked replicable, or does it require the handling of specific creators with a specific vision?"

Why stick with the shared universe, which perhaps necessarily is going to end up being driven by editorial management? Or if you demand shared universe, why not go with something looser and third party (hey, Cerebus and Spawn once had a comic together, you know!).

Just saying, if you want weird, creative characters with great stories and writing, they're out there, just not provided by the folk who view characters entirely in terms of branding and name recognition . . .

Well, that may get an award for question of the decade.

(everyone else needs to step it up)

I think I'll take this on in a post, as it's just an excellent question.