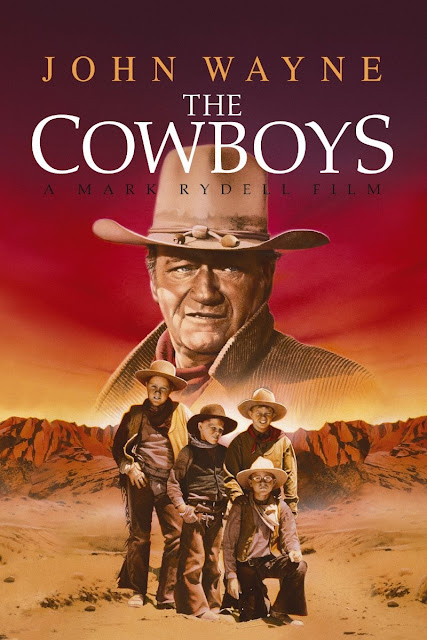 It's interesting to see The Duke in a lead role in a 70's-era Western.  If the 1960's ushered in the modern era of filmmaking and the Spaghetti Western turned the genre on its ear, by the 1972 release of The Cowboys, the western had been fertile territory for telling stories stripped down to their essence.   By the late 1960's and into the 1970's, "realism" in violence on the screen had begun to creep in, or, at least, the horror of being shot had become part of the package.

The Cowboys is a bit of a fascinating movie, maybe not flawlessly executed, but it does double duty as both a coming-of-age film and a reminder of both the lives of our forebears in a fictional context (kids were working stiffs up until the 1940's), and of what we thought of as reasonable content for an all-ages audience in 1972.

In short, the movie would never, ever get made today, and it's likely that showing the movie to kids the same age as the ones in the film, despite the PG rating, would likely get you fired.


The first half seems straightforward enough.  John Wayne's ranch hands have abandoned him just before its time for the trail-drive in order to go join in a gold rush.  The failure to take the herd to market will lead to financial disaster, and so he recruits a troop of boys between 11 and 15 right out of the schoolhouse.  The boys learn the hard life of a cowboy firsthand, meet their first African American as their cook, and head off on the trail.

Of course the trail is the hard part, especially when you're dogged by criminals led by Bruce Dern at his Bruce Dern-iest, set to rustle the cattle out from under a pack of naive kids and an old man.

The movie often feels written in shorthand, that the scenes rely so much on the tropes of the westerns you might have seen that bits don't play out as fully as you might expect or even wish to see.  There are so many boys, that aside from a young Robert Carradine and A Martinez, I'm not sure I learned to ever tell them apart, even when they're given little character bits.

At the ranch, and more so on the trail, the boys experience the hard shift from the sun-shiney day dreams of youth and their visions of what it's like to be a grown-up, tossing all of that aside for both the work they've taken on.  They meet women of easy virtue, and fail to react well.  They see the cruelty and callowness of some men, in surprisingly dark fashion, but also the goodness that can be in men, and what dignity looks like as well.

The ending of the film is surprisingly violent, but it's part of the continuum of the film, and the de-mystifying or myth-breaking of the daydream, and it's played out in - not graphic - but in a fashion that doesn't feel too much like a cartoon.  But, kids with guns, shooting at anyone feels a bit odd given the squeaky clean nature of movies both before and after this brief window of filmmaking.

This has never been my favorite John Wayne, and I guess you pegged it, talking about the shift from 60s to 70s westerns. My grandpa loved John Wayne and passed that to my dad who passed it to me. Sunday afternoons often saw the two of us queuing one up. I miss those days, and you reminded me that I need to build my collection. I don't buy DVDs as a rule, but I'm buying up those classic films I loved that used to be more difficult to find. I'm ready for a definitive John Wayne. There are plenty of collections out there, but they pick and choose.

Yeah, the studios are pretty good about making sure there's always a new set of John Wayne movies to pick up, and you can easily spend your time chasing them down. The man was prolific. These days I mostly just wait for them to show up on TCM and record them as the image is generally as good as any DVD's I can pick up. But I think you're kind of duty bound to own a copy of The Searchers.