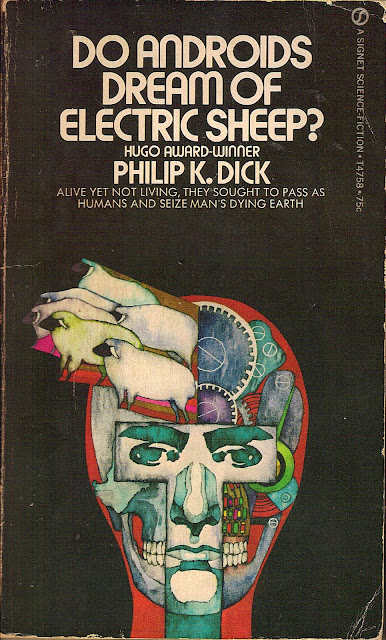 
Our Rick Deckard is a married police officer, a bounty hunter in a world living in the fallout of a limited thermonuclear exchange which took place long enough ago it seems it was before Deckard's memory.  Fallout reports are part of watching the local weather, and most non-human life on the planet has gone extinct, making living animals a highly sought after commodity and status symbol, everything from squirrels to horses cared for like prized possessions.  And, of course, if you're on a cop's salary, you can't afford all that, so you buy yourself a simulacrum - maybe an electric cat or sheep to keep the neighbors from guessing.

Meanwhile, the cities are decaying, even as what seems to be a shrinking human population huddles in the city centers, not quite aware they're on a bad trend.  Those in the know are trying to convince humans to leave Earth for colonies on Mars and elsewhere to escape the radiation and fallout as it seems to be making idiots of portions of the population and degrading their health.  The government is so supportive of the extraction of humans from Earth, each immigrant receives an Android, a lifelike human robot able to perform functions for them, act as servants, etc...

Androids aren't supposed to live on Earth, but every once in a while something goes wrong and Androids do come to Earth, usually leaving a path of bodies in their wake.

Meanwhile, humanity remaining on Earth under a cloud of radioactive ash have become be-numbed, setting their moods with a home appliance and finding religion in another device which ostensibly enables them to establish a sort of psychic contact with everyone using the device, sharing feelings and experiences through a common messianic figure, Wilbur Mercer, who performs a Sisyphean task, trying to climb a mountain as he is pelted with stones, only to succeed and fall and try again.

Deckard is given the task of tracking eight Androids and "retiring" them.  He visits the Rosen company that manufactures the new Nexus-6 type androids, and realized the company is trying to obfuscate the search, and he also meets Rachael Rosen - a Nexus-6 floor model of sorts.

Meanwhile, John Isidore, a "special", his DNA scrambled by the radioactivity and unable to immigrate, is a secondary protagonist in the novel (his counterpart in the movie significantly different, JF Sebastian) comes across his own Nexus-6 and feels he's met someone who could be his friend.

The Androids don't share the same motives as their film counterparts, and the part of Eldon Tyrell is of far greater importance in the film than the book.

What stands out most starkly is that the novel's interest is tied to the nature of the Androids as synthetic beings, explores their inability to do more than feign human behaviors and responses.  The empathy test we know from the film makes infinitely more sense in the novel as a test of not just biologic responses, but of whether or not the being across the table is capable of understanding the lives and pain of other beings.  While the movie plays with the idea, it has to commit to a greater level of humanity and empathy within its Androids.

Dick explores the idea in a multitude levels - why would humans want to keep an animal?  can an Android feel loss when another Android is retired, or merely become aware they're next?  Do they feel betrayed?  Love?  Anger?  Do humans?  What are we getting from the empathy boxes and why are we tuning out our emotions with devices?  Why do we turn on those we no longer see as human?

It's a fascinating book, and as much as I like Blade Runner as a film, it would be interesting to see the book translated more directly sometime.  It certainly feels all the more relevant today, especially in an era where we have the empathy box via social media, and rather than one-ness, we see social media as a way to tear and bite at one another.

Reading Dick is almost always an exhausting experience, and this book didn't strike me differently in that regard - especially with a few plot twists and turns that all have relevance and work in the context of the novel, but which aren't anything you'd recognize from the movie.  He doesn't make anything easy, from his nightmare vision of the future to his perspective on our possible grace as beings and what we choose to be instead, 9 times out of 10.  And if it means much at all in either case.

The book was read by Simon Vance, who reads a lot of other detective stories I read via Audible, and he's no less competent here.

Did you know they're (Boom? Image? I forget) doing a series of graphic novels lifting the dialogue straight out of the book?

Looks like it's Boom. And it looks like Chris Roberson did a prequel. Huh. I'll need to look into that.

I've had this sitting on a my bookshelf for years. Your review is interesting but I can't quite tell.. are you recommending this?

Yeah, I think so. especially before the Blade Runner sequel comes out.