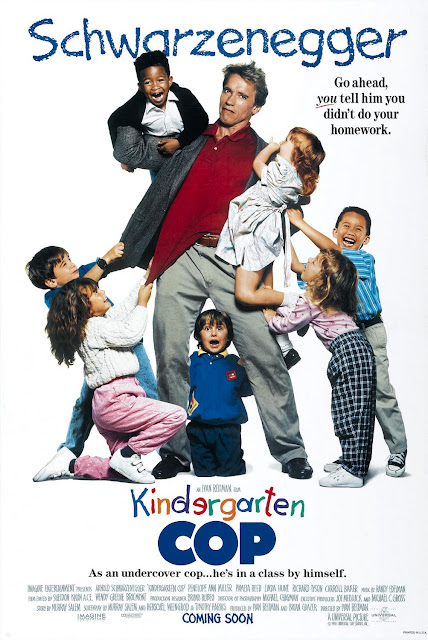 
For what is ostensibly a comedy, I think I laughed maybe four times during the entire movie.  And at least two of those were some comedic bits from Pamela Reed (Leslie Knope's mom on Parks n' Rec), who is one of the bright spots in an otherwise flat movie.

The idea was pretty clear.  Take one of Arnie's typical tough guys roles (it's almost literally the same character he'd go on to play in End of Days and was part of the meta-commentary of The Last Action Hero), then defang the character and make him deal with adorable children.  (cue laughtrack)

Tonally, the movie really, honestly does feel like it shifts from a lesser Arnie pic like Raw Deal to one of the comfy-sweater comedies of the era, with oddly sweeping orchestral scores and forgettable plots.  And then tries to merge the two at the end of the movie without reconciling how absolutely f'd up the ending should have felt to all the bystanders.

Our cop, Kimble (Schwarzenegger), is one tough Reagan-era SOB police officer who works by one one law:  his law.  He's been after a typical 1990-era hoodlum in a suit inspired by MC Hammer and a ponytail sported by all scumbags in movies of the time.  He needs to track down the crook's ex-wife, but she's gone into hiding.  But a hot tip sends him to small-town Oregon, where she was seen with her kindergarten-age son.

Arnie and his partner (Pamela Reed) head to Oregon, where Arnie is forced to take Reed's place as a stand-in teacher.  They don't know what the mother or child look like or what names they're going by, but they plan to deduce all that.  Arnie, of course, learns to love the kids and that hanging out with five-year-olds is better than cracking skulls and intimidating junkies, while also wrapping up the case he was on.  Why this operation seems to take a month or how the LA police department justifies the expense makes absoluetly no sense, but Arnie packed at least 5 weeks worth of clothes.

In short, this movie, if made today, would be a deeply, deeply complicated undertaking, and I'm kind of surprised it just flew by when it was released, as it seems like nary a single educator was consulted in the making of this movie to (a) see what actually happens, education-wise, in a kindergarten classroom, (b) what sort of credentialing is required before you can walk into a classroom and what liability looks like for an elementary school, and (c) would Arnie ever be allowed within 1000 yards of a school again after the conclusion of this movie?

The movie also features a number of storylines that sort of start and then go nowhere.  Cathy Moriarty plays a woman who could be the unidentified wife character that Arnie is trying to uncover, but aside from appearing in about three scenes, the plotline goes nowhere, no false trail is followed.  It's established Astoria, Oregon is the single-mom capital of the world, and Arnie is supposed to be a catch, but, then... nothing.  No follow up.  The one storyline the movie includes with Arnie helping out a student winds up in a situation which would, undoubtedly, cause infinitely more problems for the kid (who, it turns out, is being beaten by his dad.  So Arnie beats up the dad and says he's pressing charges.  Which, I think the school has to do or something.).

The movie even manages to waste Linda Hunt, giving her kind of dopey lines and making her out to be an utterly incompetent administrator who would be fired for nearly every single thing she does in the movie if this movie had any relationship with reality, which it does not.  Because this is a movie where kindergartners apparently spend all day preparing for firedrills and no learning has to occur.  They just need to take naps, learn to march properly and follow bellowed orders from a man of Austrian descent.  What could go wrong?

The movie does feature Penelope Ann Miller, and that is, indeed, a plus.  I'm not sure her character is particularly deep, but she does what she can.  She's also playing a woman of about 32 in the film, which is interesting as she'd played a high schooler the year before in The Freshman (she would have been about 25 at the time the movie was filmed).

Arnie himself seems much more at home with the adults than the kids, even after he's supposed to have made the transition to loving these little moppets.  Yes, you get all the cute kid stuff of inappropriate questions and kids saying the darndest things, but...  it's not like we ever really get to know the kids.  It's like there's not enough time for that in this movie that keeps wanting to spend it's time on the framing device rather than the draw for the actual film.

And, again, it's just not really funny.  Especially when you consider what actually happens in the film and how much it would freak everybody the hell out, likely getting national coverage and a pile of firings at the school in the movie.

In short - Whatever.  It was what it was, but I'd lost nothing by not seeing it, but at least I checked it off the list.

This was the rare Arnold Schwarzenegger movie I could watch with my grandmother. For that it will always have a place on my nostalgia list.

I think my Mom's mom would have really dug this movie.

As his comedies go, I thought it was better than Twins or Junior. But then I was a much younger me while watching it, so all the movie's catch phrases were still fresh.

Fortunately, this is an age of very late sequels (see Basic Instinct 2 among many, many others). Since we are blessed to have Triplets coming out, it's only a matter of time before Middle School Cop comes out. Someone please tell me I'm wrong.

I wish you all the best should you return to this movie. That said, I haven't seen "Junior" or "Twins" since their theatrical runs, so I'm not sure how I'd feel now.

Yeah, this is a weird movie; way too dark to be a comedy. The kid annoyed me too.

IT'S NOT A TUMOR!

Look, somebody had to say it.

You know, 25 years later and thousands of "it's not a tumor!" references on - the joke fell kind of flat when it actually showed up in the movie.