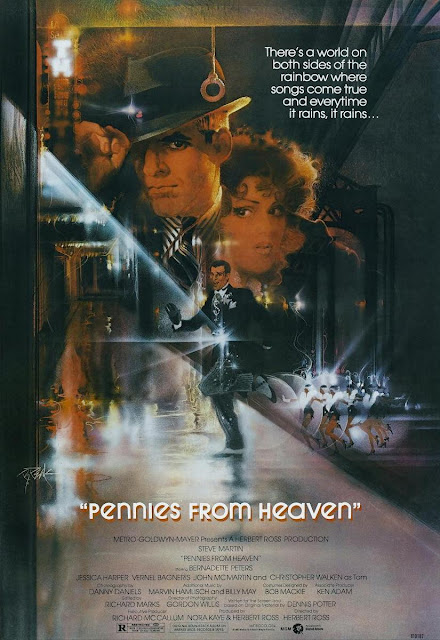 It's literally impossible to imagine this movie getting made in the last ten years.  A studio film that's a musical wherein the leads are actually lip-synching to mostly tin pan alley versions of 1930's era songs, and, by the way, it's more or less a depressing late-1970's story that maybe is deconstructing the conventions of the movie musical.  Cheerfully titled Pennies From Heaven (1981) and starring the lovable duo from The Jerk, Steve Martin and Bernadette Peters.

We wanted to see it as The Alamo Drafthouse had included clips in the La La Land pre-show as a modern musical we might not have seen.  And I was curious why I had heard of the movie, but it's not discussed much and I don't recall anyone ever telling me to check it out.

I think if I'd been clued into any of this before the movie, I might have enjoyed it more than I did.  But I spent the first thirty minutes trying to figure out what I was even looking at, and then adjusting to what they were doing.


It's a tough one.  On paper and as an exercise, it seems like this should work, maybe.  But I'm both not sure if they actually pulled off what they were trying to do - the ambitions of this movie were gigantic on a number of fronts - or if this hasn't dated dated itself by virtue of being a product of a time when deconstruction was what we were doing whenever we touched a genre with conventions hard-baked into the expectations of the zeigeist.  Heck, DC Entertainment has spent the past eight years not quite getting that they were putting thought-experiment versions of characters from 1980's comics on screen and then wondering why this didn't seem to click with critics.

I'm not sure what the writers were thinking, exactly, because stripped down to plot points, this movie has pre-code melodrama written all over it, and it's hard to tell if they were doing that intentionally or were trying to be "edgy" in making a musical about some grim realities and what feels like a very long Dan Savage column set to tin pan alley tunes.  It still follows most of the conventions of music speaking for what's in the actor's hearts and minds that they can't say - as Steve Martin's sheet music salesman, Arthur, fantasizes of a world like those in songs (and dance numbers in movies) or Bernadette Peters' lonely school teacher imagines a life beyond the classroom and home.

If the movie has anything to seriously recommend it aside from the novelty value, it's the stunning visuals of the movie, which both reflect the grandeur of 1930's musicals in lavish sets and armies of dancers, while also pushing the envelope with some brilliantly realized sequences photographed by Gordon Willis who also shot the Godfather movies, Manhattan, All the President's Men and a bunch of other stuff, most of which you'll remember as being terrific looking movies.  But here he's really able to cut loose.

I don't think you can really go wrong with Martin or Peters, and you'll also be pleased to see a young Christopher Walken and realize: he really is a song and dance man.  It's utterly strange.

This isn't a movie I'm in a rush to see again, and it's hard to recommend.  The tonal changes the movie deals with as it switches between Arthur's fantasy world and what's happening in Depression era reality is literally the point of the movie, but it doesn't... work all that well.  It's the sort of thing that is screaming it's point, and the point is "life sucks and joy is an illusion" and spends its run time digging the hole further and further down, reaching a conclusion that doesn't really pay-off any of the character arcs and just feels absurdly nihilistic.  I am also aware, had I seen this movie when I was 19, I would have bought into what they were doing lock, stock and barrel.  But I'm not 19 anymore, and that's a boring message after the thirty minute mark.   It's the sort of thing that *feels* complicated, but only if your only exposure to the world is via big, lavish MGM musicals of the 30's and 40's.

It certainly might have helped had any of the characters done much to earn the audience's attention.  I don't know that I like the idea that characters have to be "likable" or "sympathetic", but they do have to be interesting enough to want to watch and not entirely frustrating.  You have to have some abiliuty to see their perspective, but the characters - even as they show us their inner selves - keep us at arms length.  In part its the actions of the characters, but the movie goes out of its way to project an artifice to literally every line of dialog and every action, and while what they're doing or saying may feel like it's pushing some boundaries - it's hard to care much.

Curious to see what folks thought about the movie, I noted it has a high score on Rotten Tomatoes, and so I looked for Ebert's review of the movie.  Movie reviewers tended to love this sort of "we're ripping the mask off illusion!" stuff at the time, but I think I'm in agreement with ol' Roger.  It can feel like an exercise in cruelty, and it makes it extremely difficult to care much about what happens to anyone in the film.
Posted by The League at 1/14/2017 01:46:00 PM