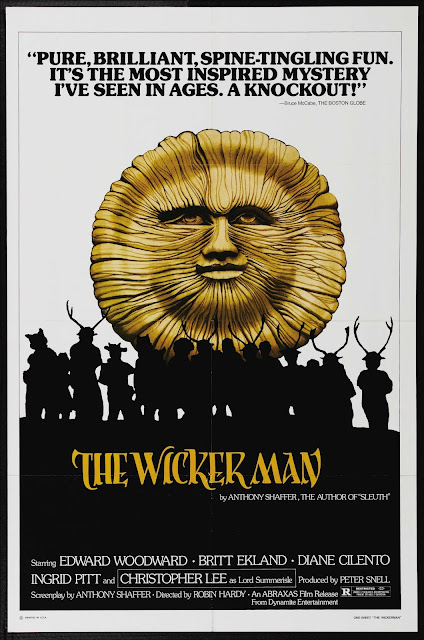 
A police officer has been summoned from Scotland (referred to here as The Mainland, which sounds funny to those of us living on an actual continent).  He's received an anonymous letter regarding the disappearance of a girl of about 12 with almost nothing else to go on.  A name and a picture.

The island, Summerisle, is small and agrarian.  Our officer is a devout Christian and almost immediately begins to realize that (a) the island's residents seem to be stonewalling him and (b) to a person, the residents are wrapped up in a very old form of paganism.

I hesitate to say more, because if you go into it blind, as did I, all the better.  Figure it out along with the Police Sergeant Howie.  Frankly, paranoid horror isn't really something I find particularly entertaining, but either I'm growing to tolerate it better in my middle-age, or I'm coming across better pictures, and I'd argue that The Wicker Man is only paranoid horror once you pause and think about what you just watched.

The movie earns a hard R less for violence or language - because it's not violent and swears are few - but thanks to a liberal dose of nudity (Britt Ekland, everybody!).  But while sensual, it's not American-style ogling nudity (sort of).

I don't know how to put this in a way that's not off-putting, but it's certainly not how I intend it, but there's straight up musical numbers inter-woven into the fabric of the film, song and dance numbers that are very much occurring as part of the action that the Sergeant Howie witnesses as the townsfolk go about their business.  It's the sort of latter-era hippie stuff I vaguely remember from any kind of public arts and crafts festivals we'd go to growing up before the flower children mostly packed away their dulcimers and lutes and whatnot, or traded them for acoustic guitars.

We'd be remiss not to mention Christopher Lee as Lord Summerisle, putting in a great performance - and one I'd say was one of his best, but when is Lee not great?  Ingrid Pitt appears in several scenes, and, of course, Britt Ekland.  It was only in scrolling through IMDB that I realized Edward Woodward, our lead, was also Robert McCall on The Equalizer, and if you were watching TV in the US in the 1980's - we loved that guy!  And totally just called him "The Equalizer".

The movie also has some great visuals, from masked and costumed islanders to collapsed churches to odd fertility rites and the final shots of the film.  Just really interesting stuff.

While the movie is certainly not for general audiences, I'm now certainly joining the herd of people saying "oh, yeah, you need to see The Wicker Man".  It would be interesting to track back a lot of what's been done in horror cinema to this film.

As a closing note, my pal SimonUK - who knows more about movies, particularly British genre cinema, than any three of my other friends combined, seemed genuinely hurt I had not watched this movie with him.  Apparently it's a favorite over in the UK, and he wanted to be with me when I watched it.  Alas.  So, apologies to Si.  I'll save The Devil Rides Out for when he's free.
Posted by The League at 2/05/2017 11:18:00 PM