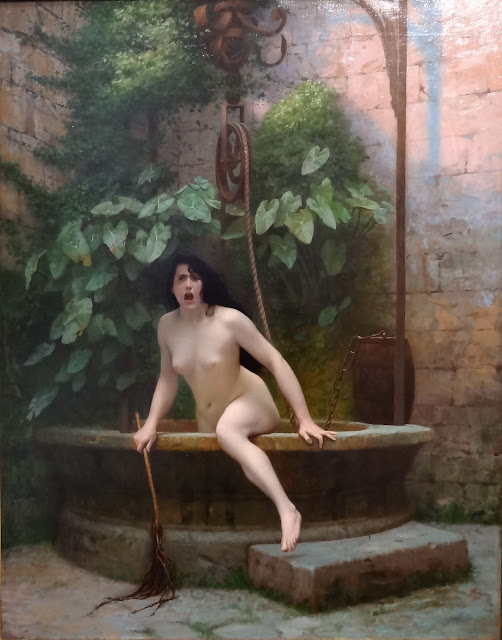 This year we had literal Neo-Nazis marching in our streets, killing people, brutalizing people, and we've seen police cover-ups and either complacence or complicity.  Our President said there were "fine people on both sides" as White Nationalists burned torches and threatened their fellow citizens and those same citizens stood up to shout back.  A whole lot of people still think "Black Lives Matter" is about pitting the lives of police versus those of Black people, which means they think police are at war with Black people.

The situation for vast numbers of young people became intensely complicated when the president decided to rescind DACA, mostly because he's clearly racist, and his inherent lack of empathy means he'd rather become draconian on some previously shoddily enforced law than ponder circumstances of others not born into Anglo privilege for five minutes.  As if the president cares about the law.  I mean, really.

The name of the painting above is Truth Coming Out of Her Well, Armed with Her Martinet to Chastise Mankind by Jean-Léon Gérôme.  It was a bit of a meme a few years back, but there's no question how arresting the visual is to the eye.  The painting, which is from the tail end of the 19th Century and was referring to political catastrophe in France - one which had buried truth for political expediency.  The woman rising from the well was a reminder that your attempts at murder and obfuscation of the truth will only lead to retribution.  You may delay her and waylay her but hurling her from a seeming bottomless pit - but it seems all you've done is anger her.  And now, bare for all to see, she's going to come back and take names.

Originally I had planned to use the image for a post in the wake of Weinstein scandal and similar fallout across the board.  I didn't write that post.  Despite the calls of some asking "where are our allies, where are the men?" it seemed - no matter how small my readership - no one needed a 40-ish, straight, white guy weighing in on what women were experiencing.  And it isn't like anyone needs someone like me to validate their experience, statements or expressions.  Shocking as it is, sometimes things aren't about *me*.

The culmination of the #MeToo moment on social media was dizzying and horrifying.  At some point you say nothing and just watch it go by as you let the depth of experience out there settle in.   I realized how lucky and sheltered I've been, working where I've worked, with the people I've worked.  Despite the very real issues on college campuses - among the staff with whom I've toiled - I haven't really been privy to anything like the stories I saw going by.  I'm not saying they don't happen, but I can count the number of issues I'm aware of in my various jobs on one hand or finger.

But when I had drinks with colleagues at a conference and heard their stories, I realized how often I'd heard things here or there elsewhere over the years, but never really saw the scope of the issue, what it meant, or how people carried this with them - and nobody had anything like a Harvey Weinstein in a bathrobe story that I heard.

Time Magazine named the social movement of #MeToo as the Persons of the Year, dubbing the people, women and men, famous and anonymous, The Silence Breakers.  If it's been a year of political grotesques, the rage of response seems to have solidified something as way of response, for people to fight back against their personal tyrants if they can't topple the figures each day in the headlines and on social media.

But the truth coming out of the well is not a serial liar, sexual harasser and seeming sociopath sits in the Nation's highest office.  The truth is that we're seemingly okay with any means to an end - even if that end seems to be the self-immolation of the constructs that are the standards and practices that embody our government and nation.

With some delight, our legislators are enacting the dreams of Old Man Potter and laughing at George Bailey as they slap each other on the back and rush through a tax bill that will dismantle social programs holding up this rickety society, place a massive debt on our children to inherit, and set next year as the year when "entitlement" programs - programs so long-lived and crucial to the financial planning of generations of Americans - will be cut to pay for the supposed tax relief (I've seen what I'm getting on a calculator, and it's going to cost me a hell of a lot more to buy back what I'm losing from those programs than the pittance of a pay out.  And, hey jack-asses, a tax cut is not a "raise", so stop calling it that.)

Part of me is well aware of how this works.  We've come incredibly far as a nation, and the pendulum will swing back and swing back hard when the decisions of today come home to roost.  It will mean social upheaval and with the fear of Reds decades in the past, it's going to be kinda hard to sell people on a fear of commies or that socialism is a dirty word when they see Lord Fontleroy riding by in a golden chariot. That isn't necessarily a great thing.  No power established through fury ever is (see: fumbling Congress of 2017).

Yeah, Roy Moore lost that dumb-ass election in Alabama.  But I can't help but notice that 70% of white men and 63% of white women voted for Moore, which means maybe the ugly voter suppression occurring in Alabama was being put on the wrong demographic.  I don't know how you convince people to not vote for someone because there's a (R) next to their name, but I kind of hoped that high school civics courses in how the government works, a healthy respect for the law, the candidate losing is judging jobs a couple of times over for being lousy at his job and pretty credible reports of child molestation will do it.

But, nope.  And I can't say how other states would fare much better at the moment.

Fortunately a lot of Black people live in Alabama and fortunately a whole lot of them got past the ridiculous Jim Crow-era voter suppression tactics (which, if you *actually* care about America, Freedom, Democracy, Liberty, etc...  you are not thinking of ways to keep people from voting) and got Doug Jones - a candidate that apparently actual Alabamanians do not love - elected.

Of course we're capping the week with Ajit Pai, frat-bro to the government stars, shucking and jiving with a Pizzagate conspiracy proponent as he leads the FCC toward a grotesque dismantling of the provisions put in place in 2015 to ensure that the telecoms, who were absolutely gearing up at that time to fuck with how we get internet, can now go ahead with those plans.  If someone wants to key this guy's car or drop his food a few times before it makes it to the table, please do so.

The potential for abuse with the end of Net Neutrality is absolutely monumental.  The reasons given for why it should end were vague and did nothing to address the concerns of the massive numbers of people who have called their Senators, written in, etc...  industry experts, and a host of others.  I'm equally concerned with how voices will be heard in the controlled landscape, what innovations we'll miss out on that aren't ISP specific, and what this will mean for the cost of internet service in a field that's largely monopolistic.  If how airlines have behaved in the past ten years is any indication, we're royally screwed.

I'm sure by the time I post this mess, something bigger and more horrible will appear and I'll have to update this.  I've already seen rumblings that "something big is coming tomorrow".  And, hell, pretty much every day I wake up to some fresh new horror in a headline on my phone, some dumb-ass action that anyone with a concept of cause-and-effect wouldn't have let occur.

But this is what we wanted.  This is the truth that is rising out of the well, and whether that Martinet is there to strike us down for our hubris and lack of vigilance in caring for the world we'd created, or whether she's stalking those slapping each other on the back as they take healthcare from children, I can't say.  But this is not a time of decency or caring for your fellow man.  It's Old Man Potter writing tax bills at midnight in marker, knowing we're all too busy getting by to do much more than call him a crook under our breath as we go about our day.