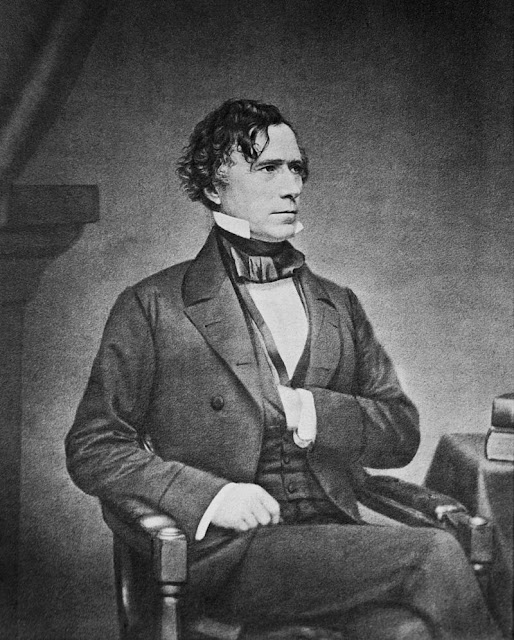 editor's note:  So, what's weird is that every President's Day I do one of these posts on a president I've not read too much about.  Sure, it's a bare amount of research, but it's more than you've done, you ingrates.  I got my draft together last night, and today I've had, like, three different sources either joking or bitching about Franklin Pierce across my social media.  So I tapped into something.  We all hate this guy.  Happy President's Day!

Franklin Pierce is the sort of President that likely seemed like a pragmatist to people at the time, but you look at his record of "common sense" actions and realize that maybe this fellow is exactly how people will see our lives in a century or so.

If the original sin of the United States was the failure to abolish slavery - something we paid for in chaos, blood and 150+ years of post-Civil War unrest and social restructuring - then Pierce's tenure as President marks the pre-Civil War attempts of the United States to twist in ethical pretzels to try not to acknowledge the inherent logical flaw in a Nation founded on a notion of liberty but which allowed for slavery.

Yes, Pierce was a drunk and probably bad to his wife.  I can forgive him the former but not the latter.  We won't spend too much time on his personal life, which is a mix of unearned luck and tragedy as he lost all of his children.  But that is the last bit of pity I'll reserve for the man.

In the House, Pierce fought against infrastructure, the Bank of the United States, and postured as a strict Constitutionalist when convenient.  A Northerner, he was against slavery but saw it as the necessary evil to retain the Union.  He participated in the usual House rules shenanigans and wore both hats - supposedly standing for the right of abolitionist bills to come to the House, but then making sure they were not read or considered.

In 1837, New Hampshire sent Pierce to the US Senate.  Facing challenges as a member of a minority party and knowing New Hampshire traditionally allowed Senators to serve only one term, Pierce resigned in 1941, not completing his term of service.  He returned to new Hampshire where he was active in politics and ran a successful law practice.

With the outbreak of the Mexican-American War (1846), Pierce signed up, was made a Colonel, and eventually promoted to Brigadier General.  Pierce's leadership was iffy and he suffered losses and injury at the Battle of Contreras.  At the Battle of Churubusco, Pierce passed out from pain caused by the aforementioned injury.  He and his brigade were mostly used as back-up and reserves straight through the taking of Mexico City where he suffered debilitating diarrhea.

But Pierce could do nothing but fail upwards, and returned to New Hampshire a hero.

As state party leader, in 1852, Pierce was nominated by his fellow (New Hampshir-ites?) to be President.  Pierce supported fun items like The Fugitive Slave Act and made it known so that he could drum up support in the South.  Bolstered by an incredibly weak candidate and platform put forth by The Whigs, Pierce did well in the general election.

Pierce barely knew William King, his Vice-Presidential running mate.  As inauguration drew near, King fell ill and was sent to Cuba to recuperate, where he was sworn in.  He returned to Alabama and promptly died, but Pierce couldn't be bothered to replace him and had no VP for the duration of his term.   Because that might be work, I guess.

Pierce's international diplomacy found some success as he completed land purchases that settled boundaries between the US and Mexico, but then was scandalized by The Ostend Affair, which made it sound like the US was about to try to take Cuba if they couldn't purchase the island from Spain.

But you know how when you're reading history about pre-Civil War America and you get to Bleeding Kansas and the Kansas-Nebraska Act and you think, "man, who the hell thought this was a good idea?"  President Pierce didn't even like it, but he fought for it, because...   something to do with party unity or some such.  When Kansas tried to get its act straight and set up a legitimate government not weighted by Missourians (the lowest form of man, if Stuart is any indication), Pierce moved to delegitimize the Topkea government, by, ahem, sic'ing Federal Troops on them.

So, yeah, basically, I'm gonna not give Pierce two inches of credit for not making Bleeding Kansas happen.  What a shit show.

That America - when faced with an obvious moral stance to embrace twists and turns and finds a million ways not to do the right thing because it might hurt capital - is such an astounding running theme of our history, and so applicable to so many modern day events, it seems this is what our Empire will likely most be remembered for.  That, and Marvel movies.

Pierce gets the honor of being the the only sitting president not re-nominated for President for a second term (so far).  On his way out, he cursed Republicans and abolitionists during his State of the Union - because Andrew Jackson shouldn't be remembered as the only tremendous jackass to have occupied the White House during the 19th Century.

After his Presidency, of course he condemned Lincoln's war to keep the South in the Union.

Pierce died a lonely old drunkard and is remembered badly.  He is what is wrong with America.


I really think you should go on for a PHD in history, teach history (with a different slant) at the college level and write some books. You have the interest, tools and an interesting perspective.

well, I think that ship has sailed. Also, there's a horrible glut of History PhDs. It's actually really ugly out there right now for those folks re: jobs as everyone's cut back on Liberal Arts in higher ed, reducing any chance for a tenure track position while History departments have only been able to bring in money by having as many students as possible. I'll just enjoy my armchair quarterbacking.


OK, then just write history books - or short stories - or screenplays.. Many of the writers are not PHD's anyway. You've got it (the interest, knowledge, and writing skill), so go with it!

I appreciate the vote of confidence but no one has ever finished anything I've ever handed them to read. Including 95% of these blogposts.