Travelogue: Up to Bozeman, Montana and a day in Yellowstone

So, on June 2nd I flew out from Austin to Bozeman, Montana to attend a conference.  I never tack vacation days onto my work trips, but this year I'm doing it twice.  I had never been to Montana, and as this event took place on the campus of Montana State University - and I really had no idea when or if I'd get back this direction - I booked a few extra days to just take it in.

A lot of us stayed at the Lewis & Clark Motel.


A fine place for a bed and some sleep.  They were really pushing the sauna, but... I dunno.  I don't want to see my colleagues in just a towel any more than I suspect that's how they want to see me.


Bozeman is not a teeny town, but if it's 100,000 people, I'd be shocked.  In addition to a college town, it's now a playground for rich folks and a lot of transplants looking for a good small town to move their families, but it also includes a lot of long-timers.


Former media mogul Ted Turner lives nearby on a Bison ranch.  My first night in, I'd arrived early, so I took myself out for a quality dinner at Ted's, a Montana chain of steakhouses that prominently feature his bison on the menu.

My colleague, Courtney, arrived on Sunday while I was working at a coffee shop in town.  She came down and we walked around a bit before grabbing lunch and a drink on a rooftop bar.

Monday I had a spare block of time from the conference so I ran to the Museum of the Rockies.

If that name is vaguely familiar, you also owned a Jurassic Park DVD with extras interviewing Jack Horner who works/ worked with the MOR.  And the more dinosaur-nerdy among you may know what a wealth of fossils have been discovered up this direction.

These pics don't really do the collection justice, but for a museum of its size and in this size of a town, it's unlike anything I've ever seen. 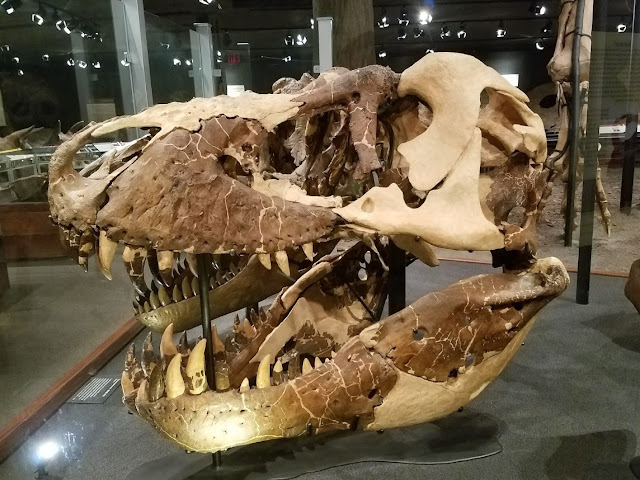 I won't share conference pics because you don't care - and there aren't many - but I can relate a few facts about the trip in general:

I ate bison at no less than 6 meals during my trip, and I saw an astonishingly good Country/Americana outfit called Little Jane and The Pistol Whips.  They know how to make a cocktail in Bozeman.  You need to stay hydrated.  There was one good coffeeshop and worth the walk.  But this conference is invariably my busiest week of the year - at the conference around 8:30 and crawling into bed around 12:30.  You don't see these people often and when the sessions end, you need to talk, and it goes late.

Also: The American Legion has karaoke on Tueday Nights.

After the conference ended, I went and rented a car.  Friday my plan was just to hit a well-written-up thing called The Montana Grizzly Encounter and then just drive around.  And, indeed, I did.

The Grizzly Encounter is a surprisingly educational roadside attraction that uses the lure of "hey, we have Grizzlies!" to teach people about the bears, what to do if you see one, and what to do to be safe for the bears and for yourself.  Also, BEAR FACTS.


Here's what I really learned:  Bears are our ornery friends.  Do not look bears in the eye.  Do not speak loudly at bears.  Back slowly away with your hands up and gaze averted.  And the owner of the Grizzly Encounter is a Zen Master of bear and tourist wrangling.

The bears here are rescue bears, taken from places that have spoiled them for the wild.  This is a pretty good life for these bears, and the don't mind the people at all.  I'm sure they'd prefer to roam around the woods, but thanks to mistakes by humans in their youth (ie: making bears think humans are great and have food for them), they can't go back to the woods without likely ending up shot and probably getting people hurt.  So, you know, don't kidnap a bear.  Leave it in the woods and don't feed it.

I then drove in a big loop, first on major freeways and then on two-lane country roads through ranch country.  Montana is truly an astounding place, visually, and my Samsung Galaxy's tiny lens did it no justice.


Texas has rolling Hill Country out where I live, and it's beautiful.  What it doesn't do in the same way is fill you with awe in quite the same way.  I didn't really take pics of mountains, because that never translates.  And I was also driving with my hands at 2 and 10 for most of the drive on windy roads.

I can only imagine what this was like when Lewis and Clark were passing through.

Back in Bozeman, they were having a Film Festival, which included an "Art Walk", which I figured to be a street festival like Austin's Pecan Street Festival, but instead the stores stayed open late and musicians played up and down Main.  I did see some very nice stuff in the galleries, and if I'd bought any of it, I'd be saying goodbye to several months pay.


I'll admit, I also found the one sorta-comics-shop in Bozeman and grabbed some stuff for what I considered to be a very reasonable price.  I took the pic above and a minute or so later it started raining, so I ran into the record store this lady was playing in front of.  They turned out to ALSO be selling back issues, so I came home from Bozeman with a few fun comics.

The next day I intended to get up early and hit the road, but my upstairs neighbor was walking around til 1:00 AM, so I didn't get to sleep til after that.  But hit the road in the morning I did, setting the GPS for Old Faithful inside Yellowstone Park.

I've literally always wanted to go to Yellowstone, so it seemed kooky to pass up the opportunity.  It was only a bit less than three hours from my hotel to the parking lot for Old Faithful, which is a weird mini-city in the middle of Yellowstone, it turns out, so it's really easy to do.

Spoilers:  I didn't see that much wildlife.  Some very large birds I could never identify, a handful of bison (people getting way too close) and a chipmunk.  No bears.

Old Faithful is one of those things I do think everyone should see.  Truly a marvel of geology.  And if you think "yeah, I'll go there and it's like a five minute thing and why did I go all this way?"  NO.


I mean, when you think about it, Old Faithful is really weird.  It's a natural phenomenon that goes off in a fairly predictable pattern on a clock.  That's the ground heating up water and everything syncing up just right to blow on a schedule most Amusement Parks would envy.

Old Faithful is part of a geological system of geysers and pools.  One Ranger said Yellowstone had 500 geysers, about half you can find in the world.  I'm taking that fellow at his word: but holy smokes are there a lot of geysers.  And really weird pools full of sulphur, chemicals and whatnot, making for some otherworldly sites. 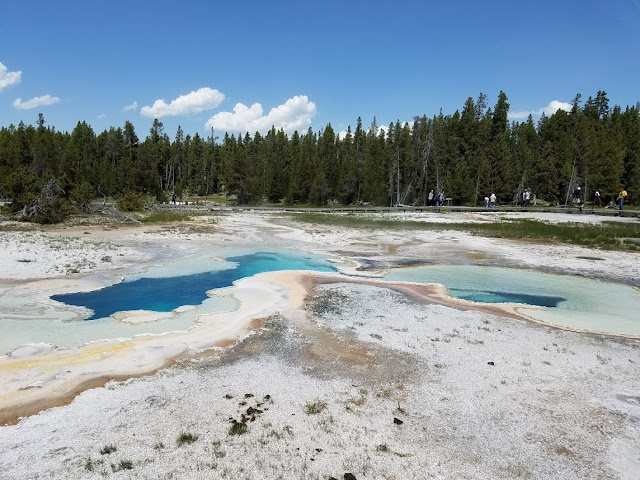 I won't belabor the story too much, but in my wandering around the park around Old Faithful, I came upon an incredibly rare eruption of Giant Geyser.  Last year Giant Geyser only erupted 3 times total.  This year, three times to date.  This is what it was doing when I ambled on over to see what these geology nerds were looking at:


Well, erupt Giant Geyser did.  It was incredible.  Shot 100 feet or more into the air.  I didn't know for hours how truly special it was, just that it was neat and was reeling from the realization that there are Geyser Nerds.  Because of course there are.


It wasn't until I got back to the Lewis & Clark that I looked at the well-manicured Wikipedia page for the Giant Geyser and learned what a neat thing I'd stumbled onto.

The Old Faithful Inn has stood since about 1904 in one form or another.  I'd heard so much about this place, I was thrilled to see it in person.


It's a grand old place built in a style no one would dream of today: Ie - it will still be standing in fifty years.

I went in, checked out the gift shop and ate a bison burger.  After walking 10,000 steps in the sun, I also downed about a gallon of water. 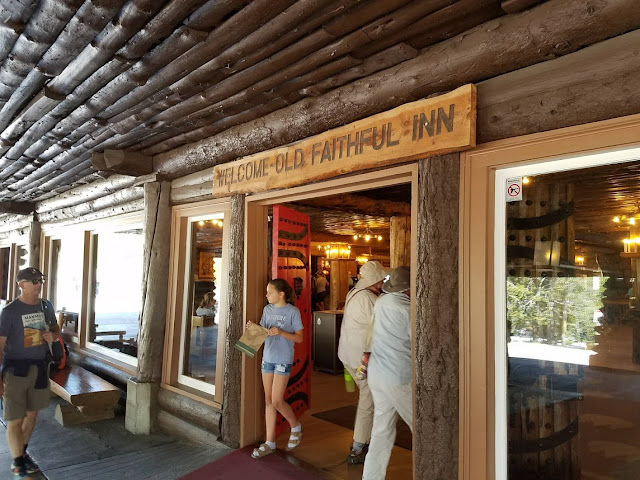 After that, another near-three-hour drive back to town through towering mountains (I may have listened to some Wagner on my way), I took it easy for the evening, shoved 7 days worth of clothes back in the suitcase and turned in.

My flight was out at 7:30 in the morning.  It had been raining so the mountains were kinda gorgeous as the sun was coming up. 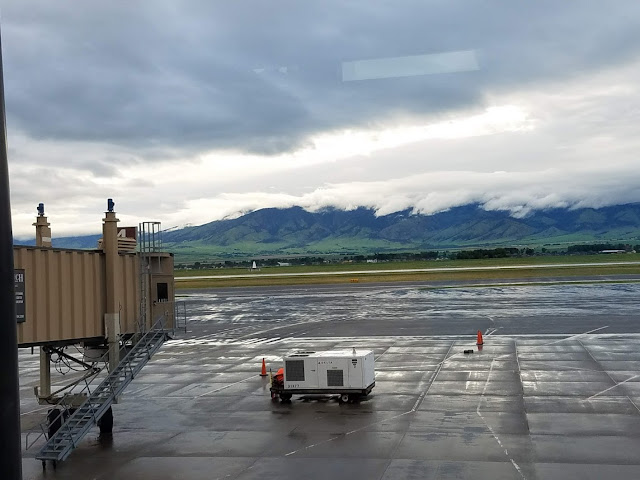 These pictures are beautiful. He's not lying, folks - Ryan has been talking about wanting to go to Yellowstone for as long as I've known him. So happy you were able to take some extra days and go see the Big Sky. :)

Sounds like a cool trip! I'm a little jealous!