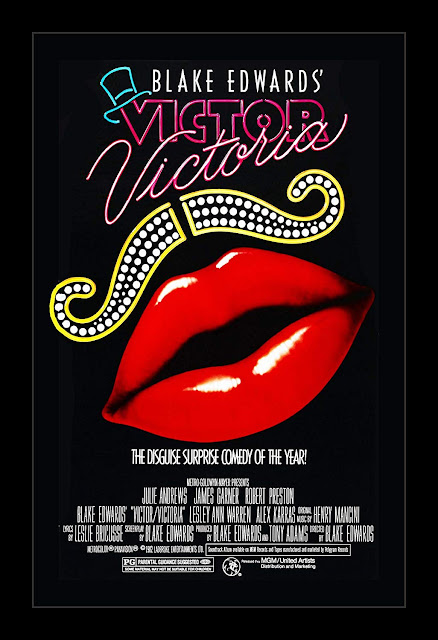 
Curiously, this film hit at the same time as Tootsie, another movie about a gender-swapped down-on-their-luck actor who will also blow their lucrative new gig if they pursue romance and reveal themselves (Ebert mentions Victor/ Victoria in his review).  Honestly, my memory of Tootsie is that there's a bit more story and less of the commitment to sex-farce as in Victor/Victoria.  But... it's also worth nothing that V/V has a lot more territory to cover as it posits a lot of ideas about gender, sex and romance that sound a hell of a lot like twitter conversations on same.  While there may be nothing new under the sun with gender, sex and romance - the live-and-let-live approach to gender-bending and homosexuality of Victor/ Victoria needs to get people comfortable while possibly out of their comfort zones - and I think it does.

Julie Andrews plays "Victoria", a stage singer stranded in circa-1930 Paris who can't land a gig as no one is looking for sopranos.  Robert Preston (the guy who played Centauri in The Last Starfighter, Leaguers), plays a gay stage performer who has just been fired.  He comes up with the idea to get Victoria to pose as a man who performs as a female, which is something very in demand.

The show is a sensation, but things get complicated as a Chicago nightclub empresario who has transplanted to Paris (a fantastic James Garner) becomes smitten by whom he first believes is a woman, only to go into a tizzy when he believes the apple of his eye is actually a man (who is actually a woman).

It would be about ten years before a movie would have the cajones to just lean into the notion that the man would decide he didn't care with The Crying Game, I think.  Y'all can correct me on that.  In fact, I know this is wrong, but I was a kid in the 1980's and missing a lot of art movies and whatnot.  But to that point - this was a mainstream release at, like, The Cinema Oaks IV in your local mall.

Curiously, Victor/ Victoria did not have the tone I expected at all, which I figured to be more like The Crying Game by way of Cabaret, but... this is very much a Blake Edwards film and remains warm and upbeat throughout.  It's a very sweet movie, even when it has teeth, and doesn't go maudlin nor morbid, and keeps up the energy of a sex farce with a bit of daffiness.

The movie also has Alex Karras in a bold role for an actor who had been in the NFL, and Lesley Ann Warren, who nails her part and has a really pretty terrific number all her own.

The casting of icon Julie Andrews in the part isn't difficult because she's also Mary Poppins - it's difficult because the film has a hard time ever quite passing her as a male.  Acting-wise, I tip my hat.  The character is struggling with what it means to be "Victor" - which she hasn't exactly prepared to do - and she's a soprano.  But, yeah, from time to time, she pulls the full transformation, particularly when she finishes a number and removed a wig, and it's there that you can see what the character is selling.

Anyhoo... the film is a lot more *fun* than I was expecting, which was welcome viewing during this time of year.  Preston and Garner are both great, and Blake Edwards' direction is spot on.  Worth checking out if you haven't.