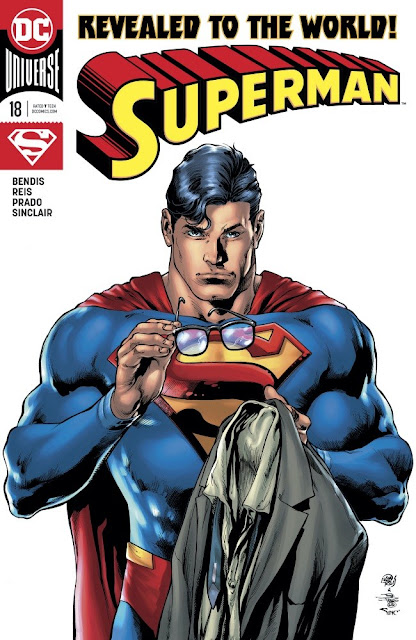 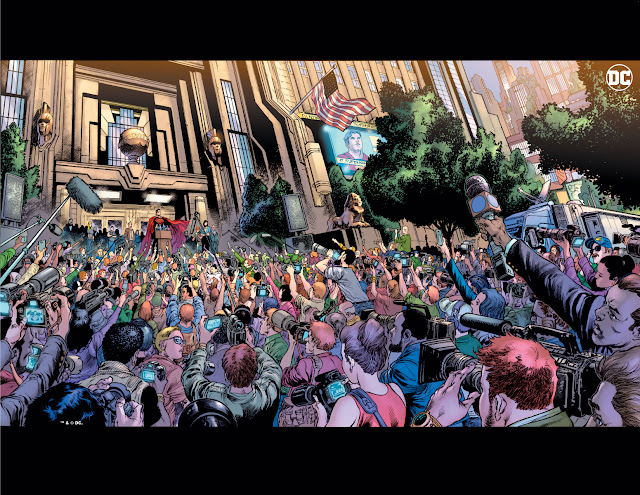 Of course DC sort of did this a few years ago with the Truth storyline by Gene Yuen Lang, which was part of the flailing final days of the New 52.  In that story, Lois Lane reveals the secret for some pretty good reason that I can no longer remember, but it is important that it was not Clark's choice.  Girl just revealed the secret.

I am not particularly a fan of Truth - but I don't dislike it.  It just feels like an Imaginary Story or Elseworlds given that New52 fell apart and was subsumed by Rebirth and the tortured continuity fixing of Superman over the past few years til Bendis came onboard.  I just didn't particularly care about New 52 Superman, because, honestly, I didn't feel like DC had any real plan for the character once they'd unveiled him.  It was just intended to goose sales and do something modestly different.  But New 52 Superman was such a mess, the entire move was met with a collective shrug by even us Superman fans.  "Yeah, everything's been off for years already, why not this?"

I won't say the creative and editorial team behind Truth wasn't thoughtful, they just didn't have Superman more or less at his prime when they tried their idea, anyway.  Lois and Superman were more or less just work acquaintances in the comics.  Superman has barely been at the Planet over the course of New 52, and there has never been a solid supporting cast or world for him to lose or have at stake.

But Bendis has been slowly building to this point for the entire run on both Action and Superman, setting up Lois as exposed - kissing Superman in a photo - something Clark, Superman and Lois couldn't ignore forever.  And, like seeing a gun in the first act, something that has to come home to roost sooner or later or until a writer moves off a book and a storyline just dies in play.

That, of course, is not *the* reason Superman comes clean.

For the past 18 months, Superman has been as solid as a comics franchise as I can recall since the triangle era or even before.  For once, it feels like there's a hand on the wheel and not just random creatives sweeping in and missing the easy lay-up before letting the next person take their shot.*

With Rebirth, Dan Jurgens, Peter Tomasi and others helped rehabilitate Superman at DC, and I'll always be grateful.  Rebirth was a phenomenal breath of fresh air at a company that had made some large and obvious missteps, and they worked with a deeply battered character and immediately found a way to make Superman work, even if it made a reader sound like a lunatic describing what had happened with Superman to anyone walking in off the street.  The Bendis arrival cemented the direction they'd set, and even restored the red shorts.  Not to mention giving Superman a continuity that basically ignored about seven years of comics and gave folks a character that was, for the first time in a decade, Superman.**

The issue itself is a beautiful piece of superhero comics.  Of course the art by Ivan Reis - who just gets stronger every year - will one day be mentioned in the same sentences as Neal Adams and others who have left their mark.  In a comic full of moments, Reis manages them all, from the punchline of the reveal to Jimmy to the soon-to-be-famous reveal to Perry White, one of the finest pages of comics I've seen in the past few years.  Not a word on the page, and the entire story of two men and their relationship is told, and how this news is handled and the change it brings... it's breathtaking stuff.

The nuance of Bendis' characterizations in every line and every panel is so welcome.  We've been talking a lot about what makes "surprise" work in and around the PodCast, that notion that "surprise" in a work should make total sense when you see it, but it's also something you didn't see coming.  And this issue is that to a T.  The reveal could have been treated with histrionics, and those will come, I'm sure, but for now - Bendis is focusing on how and why a character who stands for truth and justice would abandon a false identity and be utterly themself to everyone.  And not shy away from why they chose to live a double-life, share their circumstances with the world and simply hope they understand.  It's a message that Superman must share with everyone, that honesty matters and he's inspired by what he sees in others when they try for more truth.

There have been prior reveals in comics.  I was there for Captain America dropping his secret ID, and Spider-Man (for a hot minute).   These days, it seems weirdly passe to have a secret ID, but for Spider-Man, Batman and Superman?  It's always been part of the package.  Barry Allen seems like he falls in that same camp of masked heroes who need the mask for a darn good reason.

The sincerity and handling of the reveal this time?  It doesn't feel like an editorial mandate or spur of the moment story idea.  It feels organic and earned.  Superman telling the truth - especially in response to the harm he's seen secrets can hold, and the truth he hopes others hold dear - makes total sense.

But there's no ignoring this change.  Ret-Cons, reboots, etc... sure.  All of that could wipe it all away.  And I've never forgotten the pitch for Superman 2000.    And, look, at this point Batman is hooked up and in love and has a teenage son, Superman has a teenage son...  It's all starting to look very Earth 2.  And we are getting to the end of Doomsday Clock, plus whatever JLA has been up to the past few years.  There are absolutely new stories to tell with a Superman with an ID exposed to the world... but do I think DC is really shelving Superman as the original character with a secret ID?

I mean, no.  Not permanently.

The good news is that I trust Bendis.  He may not always wind up his stories with the finale I was hoping for, but to date, he's handled his run on the super-books so well, I'm in a bit of shock.  This has been the best time in over a decade to be a Superman reader, if just from the number of titles and all of consistent quality that I can buy every month.


So, we'll see where all this heads.  If nothing else, Bendis is focused on long-term, multi-year storytelling, something he made his trademark at Marvel.  And that's something sorely lacking in comics - but I deeply appreciate someone working for the long-term success of the titles and characters.

And that I have no idea how this is going to work?  All the better.


*There have been GREAT runs, or I would have given up on the comics themselves long ago.  But there has also not been a ton of consistency.

**this is not to ignore the Jurgens and Tomasi stuff, but they clearly hadn't settled on much when they took over.  For goodness, sake, this was a transdimensional Superman who was using the name "Jonathan" and living on a farm.  It wasn't exactly "reporter for a great Metropolitan newspaper".  And it was clear things were a bit of a mess behind the scenes, even as good to great comics were coming out.

This is a Super post! Man, it's good to see you writing something new about your favorite comic!

It's a lot more fun to discuss when you're enjoying the heck out of something. I can pick a nit, but I'd rather be trumpeting a job well done.