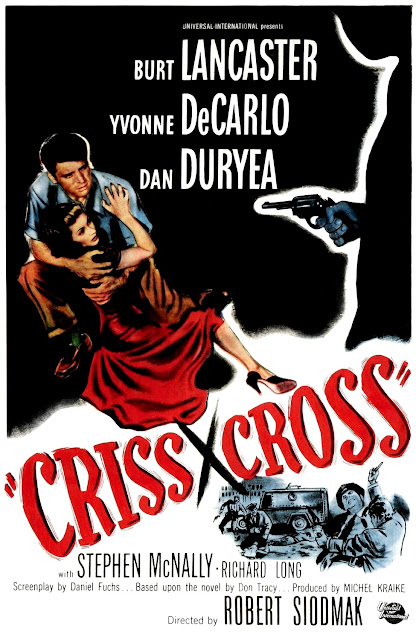 
You can start with Robert Siodmak, now a name I drop when people ask me to name one of my favorite directors.  And that's just based on about five movies of his I've seen.  All of the movies are rock solid (we can quibble over Son of Dracula, but, I mean...  you can only work with what you've got sometimes, and at least the story of that film is kind of interesting).  But any director who did The Killers, Criss Cross, Phantom Lady and Cry of the City is one hell of a director.

It doesn't hurt that he's joined by Burt Lancaster and Dan Duryea as our protagonist and antagonist - and if you don't know Dan Duryea, look into his work.  He was a big deal at the time for a reason - he's charismatic, but he's got range that let's him play menacing villains, simps and heroes all with equal weight.  Just terrific.

And, of course, the movie is pure noir, and with that, we have to have a femme fatale.  I was surprised to learn that some people think Yvonne DeCarlo is poor casting for our romantic interest, but...  man, I couldn't disagree more.  Not only does she have the drop-dead good looks you can imagine led Lancaster astray the first time, but that have kept him thinking about her since they busted up.  But - of course, looks only take you so far - and it's here that I think DeCarlo actually exceeds - I totally buy her as the woman who looks out for herself first, but makes a lot of very bad decisions en route to finding security.  But she's still got something of a quality that because she sells herself on whatever she says at the time, of *course* the fellas believe her.

The movie features a fascinating heist sequence that is worth checking out even if you don't want to watch the whole film.  It's an armored truck robbery, but smarter than most I've seen, and even at that, it's frikkin' chaos from the start - and Siodmak makes it work.

Anyway - trust me.  If you were going to ask me for a movie that really drove home the look, spirit and notions of film noir, this is a great one to look at after you've seen the usual four or five movies folks suggest.  Get a different look than mini-blinds and detectives or Stanwyck and her ankle bracelet.  Plus - LA in 1949!  Check it out.