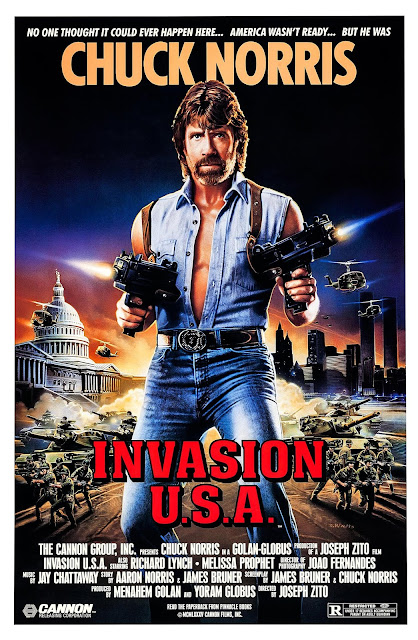 Pause Video and Wait At:  20 seconds - as soon as the Cannon Logo locks in.

The 80's were a time of amazing action movies that rarely, if ever, made any sense, but did provide plumes of flame and dudes with automatic weapons taking care of business.  It was also the halcyon days of Chuck Norris before he became a meme.  But how did he become a meme and why?  We're here to find out.

Join us as America works through its paranoia and racism in the form of a land-based invasion force who seems hell-bent on... something.  But apparently a single boatload of guys in camo pants is enough to set Reagan's America on its ear!  You'll wonder how a country need be made great again when you're bad-ass enough to have Chuck Norris around to single-handedly save the nation!

There’s a doc about Cannon that I watched a couple weeks ago. It’s pretty interesting and those dudes made some weird and good stuff.

I've seen it! Cannon made so many movies I watched during the halcyon days of video rental that I assumed they were a major studio until, like, college. The movies were rarely "good", but I thoroughly enjoyed the documentary and finding out what the deal actually was with those guys.