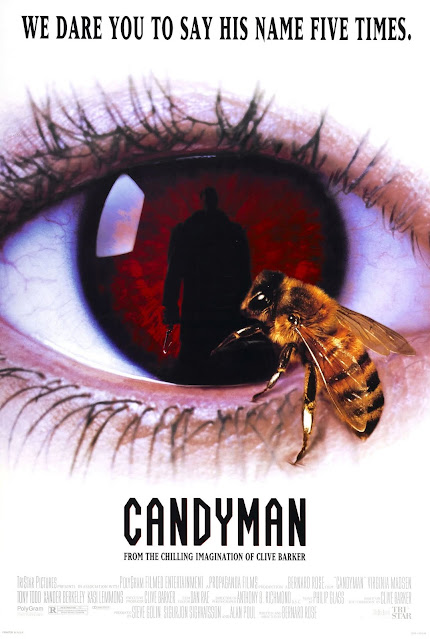 Watched:  08/29/2021
Format:  Amazon
Viewing:  First
Decade:  1990's
Director:  Bernard Rose
Interesting.
So help me, from 1992 until about, oh, 2016, I thought Candyman (1992) was just another quick, cheaply produced horror entry along the lines of (forgive me) Leprechaun.  I really thought it was horny teens saying "Bloody Mary" in a mirror and getting murdered, and that seemed.... stupid.  I don't really care about a lot of horror, and that seemed like a good one to not care about.
In college (1993) I lived on the "arts" floor in Jester West, and our two study lounges had large murals painted on the walls from students past.  One room had kinda Nagel-esque pictures of pianos or something, and the other had a (not amazing) mural of Jimi Hendrix.  One day, a very nice girl from my floor came in there while I was studying and was upset she couldn't use the other room for one reason or another, and I said "well, you can study here.  I'm just reading." and she said "Nope.  That mural looks like Candyman."  And I was like "from the horror movie?"  She nodded and backed out and that was that.
Strong reaction, that, I thought.
What I misunderstood until last night was that she thought Candyman looked like Jim Hendrix (in no way is this true).  So.
A while back - maybe five years ago - I noticed people not only still talked about the first Candyman movie, they were doing so with a particular reverence, which... you know, people don't do same for Ghoulies.  But I didn't particularly know why, just set a marker in the back of my head to maybe check the movie out.
Anyway, everyone is flipping out because "new Candyman".  I figured "sure, why not watch the original?"  And, indeed, I did.
Up came the credits, a sort of thoughtful pass down the main thoroughfares of Chicago, and names started popping up.  Virginia Madsen is in this?  Wait, written by Clive Barker?  Score by Philip Glass?
Anyway, it's not entirely a prestige picture - director Bernard Rose would move on to do those and arthouse films in the near future with stuff like Immortal Beloved.  But Candyman is the stuff of academia's dreams and nightmares.  I can only imagine the papers and theses that have been written about the film and it's exploration of liberal white privilege in Black spaces and the striking resonance circa 1992 and how that same note is just as relevant now as then.
I won't bother with a synopsis, my assumption is I'm the last one to see this movie.  But I am absolutely gobsmacked at the thought and risks this movie took.  And that Madsen was so game and good for a role that doesn't exactly play as heroic as a lead.
The film is not exactly shy about going after the sacred cow of Humanities research and the people doing the work.  I don't recall another film that wasn't, you know, guys in pith helmets upsetting an elder god with quite this same "oh, these goofy nitwits", and actually showing that the wide-eyed and clumsy approach of grad students can be no less damaging nor are they less equipped to understand other people than colonists and explorers.  The "brave" research is a bit of tourism into the very real lives and problems - centuries old - that they'll sum up in a thesis and move on as an "expert".  Heck, we see Madsen's husband's colleague, whom she sees as a bloviating dick, has actually done the hard work to uncover at least the historical basis of Candyman, something she's not bothered to even consider - just othering the people she sees trading the modern folklore.
But the people of the very real Cabrini-Green of the early 1990's would have seen the well-coiffed Madsen as an interloper at best, a threat or victim at worst.  And the movie is clear about why.  Candyman may be metaphor for the harm well-meaning but naive people can do inserting themselves into the lives of others, and the pacts and rules that have kept a place together or at least need to be understood so those living there can co-exist and survive.
I'm also interested in the movie's self-aware approach to pre-internet urban myth-making and shared stories.  It's not a huge jump to see the ritual and story of "Candyman" as not much more than a mix of "Bloody Mary" and "The Hook Hand Man" urban legends of middle-school slumber party chatter.  I'm curious to see if the 2021 sequel delves further into how obviously phony stories are more trusted than facts and reality when we hear them from someone who knew someone who knew something.
Anyway, I do wish I'd seen this movie... 30 years ago?
It's not note-for-note a perfect film, but it's beautifully shot.  And those folk-art style paintings in the Candyman's layer very much better inform my dorm-mate's reaction to the Jimi Hendrix lounge.  The music by Glass, a surprisingly solid fit.
Anyway, it has made me curious about what came next - I'm aware there are sequels.  I have been lightly forewarned not to delve too deep.
Posted by The League at 8/30/2021 12:22:00 AM