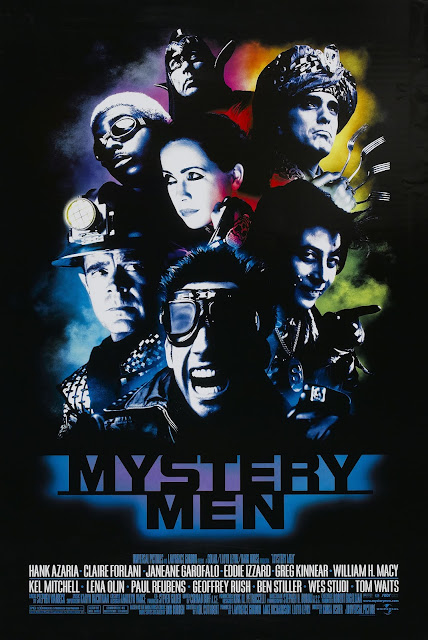 Watched:  09/17/2021
Format:  Netflix
Viewing:  Unknown.  More than 2, less than 6.
Decade:  1990's
Director:  Kinka Usher (his only movie)
This movie was unnecessary, but it had a lot of fun bits.  It just came out totally without context, and would make way more sense in a world with 20 superhero shows on and 5 or so mega superhero movies per year.
It's adapted from a comic, which would have made a ton of sense in a comic shop in the late 1980's - 1990's.  After all, people in a comic shoppe have enough of a feel for comics to understand satire over the camp of the 1960's.  And it's kind of not a surprise that in a decade that saw 3 Batman movies and not much else, the idea of Too Many Superheroes and Wannabe Superheroes didn't exactly land.
I read something that said "the film is too self-aware" and that, I think, is a big problem with it.  Everyone feels sort of like they're both aware of superhero movies, and camp superheroes, and they're doing a very long sketch about superheroes where they're kind of looking at the audience going "see?  see what I did there?"
Here are the only four feature credits of the screenwriter, in order:  Return of the Swamp Thing, Hocus Pocus, Mystery Men, The Adventures of Pluto Nash
The director made only one movie.  This is it.
I think they sincerely tried, and if they hadn't been working from thin soup with the initial premise - it's another "mad scientist has device to blow up the city" thing - not too different from where the Batman franchise had drifted by '99 - they might have done something more interesting.  But "mad scientist has a thing" would plague superhero movies through a lot of early Marvel.
In short, I'd love to see the oral history of this movie, as it seems like the studio didn't really want to make it.  But they did.  It's a spin-off of 1980-90's weirdo indie darling comic, The Flaming Carrot (for the first time in 22 years, I actually DO remember this comic now).  But they didn't use the one sorta-name character?  And they made up half the characters they did use?
To it's credit, the movie gives several main characters an arc, including the late-arriving and movie-stealing ur-1990's fixture, Janeane Garolafo.*  But it really, really is an all-star (pun!  They use that fucking song) cast.  Ben Stiller.  William H. Macy.  Paul Reubens.  Hank Azari.  Kel Mitchell.  Greg Kinnear. Geoffrey Rush. Lena Olin**. Eddie Izzard.  Tom Waits.  Wes Studi.
But also, just because:  Artie Lange.  Ricky Jay.  Claire Forlani.  Ned Bellamy.  Michael Bay.  CeeLo Green.  Ricki Rachtman.  Jody Watley.  and way, way more.
Unfortunately, I think it's just a lot of ideas thrown in a pot without a cohesive direction.  The director actually voluntarily quit trying to do features after this, and I can understand why.
The movie, ostensibly a comedy, passes for minutes without any real jokes.  Just kind of mildly pleasant or harmless bits.  It's... weird.  And long.  Clocking in at 2 hours.
I don't hate it.  I don't even dislike it.  It's just not one I think I need to watch again for a long while unless I want to skip to when Garofalo shows up.
*I see she's working all the time, just not in what I'm watching, somehow
** I kept staring at this actress saying "she looks familiar", but couldn't place her.  I hadn't thought of Olin in a decade, at least
Posted by The League at 9/18/2021 11:41:00 PM