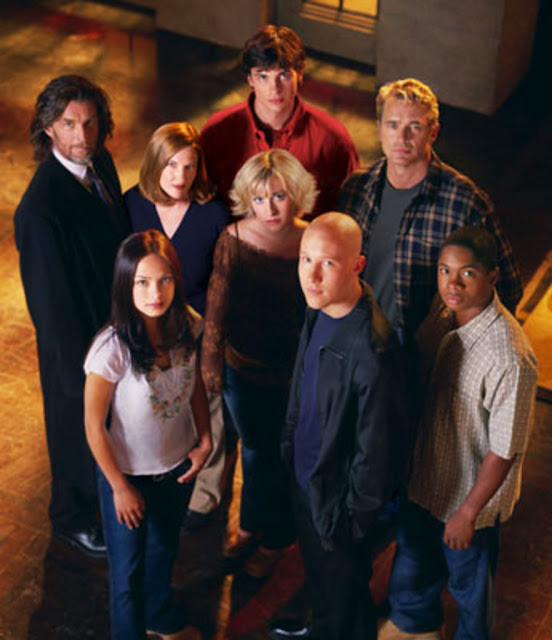 It's a fascinating thing to return to a show 20 years later.  For the kids, Smallville debuted when I was about 26 and would have watched pretty much anything that was comic-book related, but was aggressively obsessed with all things Superman - an obsession which started roughly five or six years prior and continues to this day in a toned-down sort of way.  It will sound weird to new comics readers now, but arriving at Superman around the age of 20 or 21 was late for a comics nerd as I'd been reading comics for a decade with no particular interest in The Man of Steel.  But, a confluence of comics that spoke to me where I lived featuring Superman* began trickling out in the mid to late 90's, and that, paired with the WB's Superman: The Animated Series, turned the tide.

At the time of show's debut, I wasn't much of a TV watcher - as in, I didn't make time for television, but I did watch a lot of films.  That said - I'd followed X-Files til right about at this point (when I gave up on the program), but had not been a person to obsess over a particular show, otherwise.  Well, maybe Seinfeld, Simpsons and some Babylon 5.  And lest we forget, Chef!.  No Buffy, Angel or whatever else for me.

I was aware that the team which would bring Smallville to the screen, Millar and Gough, had tried to get a teen Bruce Wayne show off the ground, maybe as early as 1997, but WB is super weird about Batman on television to this day.  And so we got a high school Superman, instead.  Which is fine.  We had 60 years of Superman and Superboy comics from a variety of eras to pull from by this point.

Jamie had decided she was doing a re-watch with or without me, and I said "sure".  Y'all, she watches so much dumb stuff because she's in in the room with me.  Thankfully, her scheduled episodes for her re-watch is much slimmer than I was anticipating, and that's a mercy.  I would probably bail.  You forget how *bad* TV was prior to our current era of TV, and I had little patience for much of it.  Like, nothing ever makes any sense and is only loosely moored to reality, and everyone constantly lies so there's *drama*.  In comparison to, say, the Ms. Marvel show I'm currently enjoying on Disney+, this writing is genuinely not good.  But for the time...

Speaking of.  The show debuted at a very awkward time.  October 16, 2001 was just a month after 9/11, and we really didn't know how we felt as a nation at that time.  I suspect a bit of hokey teen romance and superheroics was actually not a bad distraction.  It was also shortly after X-Men had come out about 6 months before Spider-Man would arrive, cementing the idea that superheroes maybe could work in live action.

Since watching the first few seasons, I think I rewatched Season 1 and 2 on DVD, but haven't really watched the show again since.  I don't tend to return to rewatch many shows that lack Hannah Waddingham.  So this is the first time I've given these episodes a whirl in a long, long time.  Quickly we'll get to the stuff I haven't seen since it aired, and eventually to stuff I never saw because I skipped 2 seasons or so and watched whole seasons in FFWD.

Anyway, we just finished watching a mere 3 episodes Jamie had scheduled for Season 1 for our review.  Here are some observations:

I am sure I will do more of these posts.  I have opinions.  The cast has gone on to a wide array of things, and those will color how I watch the show, I am sure.  We will not-not talk about how Chloe went on to join a cult and get into some really dark stuff.  And I liked Chloe!
Anyway, things will look up with the arrival of Lois.

*I was picking up Superman issues depending on what I saw on the cover for a bit, but the Triangle stuff was intimidating and a commitment if you weren't already bought in.  But Kingdom Come, JLA and a few other books centering Superman got me to reconsider.  And just as I was making that decision, Superman: Peace on Earth debuted and I got a mission statement and understanding of who Superman is that was otherwise difficult to uncover.

Chef is so great!