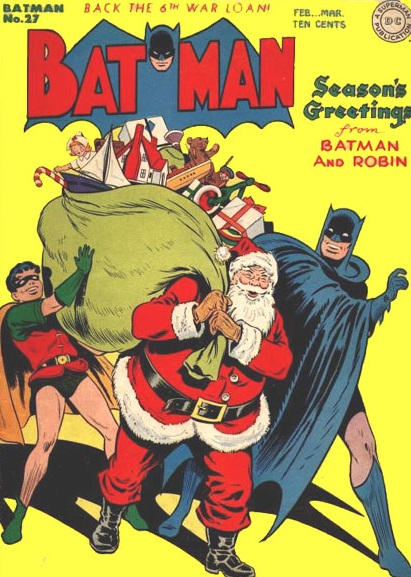 You know, I just don't see this happening in a current issue of Batman or Detective Comics. But its nice to know that Batman and Robin, once upon a time, totally got into the Christmas spirit.

Hey!  I've known Hilary since the 4th grade, and now she's one of the subjects of an upcoming documentary on the hard-traveling heroes of Americana/ Folk Music.

Hilary and Stuart are The Flyin' A's (who I went to go see just last night).  I've known a lot of musicians at this point, and some have been successful, some less so, but I haven't seen anyone who has worked as hard at keeping their music going as these two.  And they're actually very good, too.*

A while back Stuart and Hilary were noticed by a documentary crew and were approached to take part in the film.  You can see Hil (not really the shyest of daffodils) gets a lot of coverage.

1.  You can see a trailer for their documentary here.

2.  You can help fund the documentary by contributing to the Kickstarter at this link.

They only have a couple of weeks left, so if you can kick in a few bucks, it would get the documentary a really long way and get Hilary and Stuart in front of more eyes and ears than a summer's worth of touring.


Provided by our own AmyD.

This was my response to her email:

I doubt you guys listen to much Magic 95.5 for their magical month of Christmas, but I think they play this song every hour on the hour.  Its insane.

Sometimes...  this is the song that gets stuck in my head, and even a power drill and a tire iron cannot get it out.

It seems Marvel is going to release a Toy Story limited series later this year. Toy Story, while more Pixar than traditional Disney (although the Disney Store would beg to differ), was also one of the first titles launched by Boom! when they began rolling out Disney properties under their license.

Really, it was a lot of fun. And so when Disney purchased Marvel, I knew that a wrench would get thrown in the works.

Now, this is one comic of a four-issue limited series of one property. I am still not able to buy new issues of Mickey, Scrooge or Donald. But I will be watching Marvel in 2012 to see what they try. And, hopefully, it won't mess with the great work Fantagraphics is doing collecting the really old school Disney strips and comics.
Posted by The League at 12/16/2011 10:51:00 AM 1 comment:

You know, I don't want to do a "best of" list, because, seriously, I didn't watch that many movies or TV shows, read that many books, etc...

So, instead, here's sort of a list of stuff I liked this year.

TV
Friday Night Lights - final season.  The show nobody watched while it was on, but everyone seems to be finding now.  The show wound up on a great note, bringing together years of storylines.
Louis - Louis CK's odd non-sitcom.  Its on FX, its critically acclaimed and lightly watched, but its maybe the closest to a singular vision you're going to find on TV.
Game of Thrones - I wasn't expecting much, and instead I got totally wrapped up in the show.  And started rationalizing reasons why it was okay to like the really pretty bad bad-guys.  Peter Dinklage was terrific.
American Horror Story - gets a mention because so many people didn't give it a chance, and until the penultimate episode, it was one seriously messed up show that was way more entertaining than I was guessing (your mileage will vary).  Also, its show #2 on the list featuring Connie Britton.
The League - I don't even think this show is terribly good, but it is funny in a misanthropic, semi-nihilistic sort of way.
Park and Rec - This show has always been pretty solid, but this year it hit a particular stride, even with the tragic loss of Lil' Sebastian (RIP).
Adventure Time - I would try to explain this show, but the only way you're going to find out about it is if your kids tune in.  You'll enjoy it/ get it more than they will.
Batman: The Brave and the Bold - Probably my favorite show on TV this year, and it went out with a bang.

There were a lot of good shows.  I didn't talk about my perennial favorite Mythbusters, for example.  What else can you say in season 8 or whatever they're on?

Movies (first run at the theater)
Drive - This one hit so many of my personal buttons for a movie, they might as well have asked me what I thought I'd like to see in a crime flick.
Hugo - Likely the best bit of direction I've seen in a couple of years, and a true piece of art talking about art. And, of course, its flopping.
Rise of the Planet of the Apes - APES.
Attack the Block - this one was such a pleasant surprise, I likely overhyped it.  But it was a nice contrast to the nostalgic Super 8.
Captain America - My favorite superhero movie in a while

Movies (on my TV or elsewhere)
The Glass Key - just a kick-ass bit of crime cinema
The Hustler - I am kicking myself for waiting so long to see this movie.  Absolutely brilliant.
Gun Crazy - Those crazy kids.  They almost made it work.  Except for all the gunplay and murder.
Night of the Hunter - Hey!  Its also sort of a Christmas movie!

Books
Oh, I don't know.  They've all been fine.

Every year, right around Christmas, Ms. Darlene Love appears on the Late Show with David Letterman to perform "Christmas (Baby, Please Come Home)", not just the best modern era Christmas song (in my opinion), but one of Phil Spector's best, no matter what Holiday or day we're talking about.
Posted by The League at 12/15/2011 07:03:00 PM No comments:

Hey, all four of you who read this site.

If SOPA passes today, that may be the end of this blog.  Just FYI.  If it does pass, I'd have to likely not just stop posting, but may need to pull this blog and the archives of League of Melbotis offline.  And forget tumblr.

Basically, its going to make 95% of what I do and talk about here not just a risk to me (of a felony, not just a law suit), but to any of you who might link back to me.

I've written to my congress people, but they're from Texas, so if anyone is waving a $20 bill their direction, they'll be insisting Jesus pre-ordained SOPA and anyone who doesn't love the bill hates America.

So, you know, now would be a good time to write your local congressperson and see if you can't shake the tree a little.

Funny.  This really wasn't how I was expecting to end this blog (I assumed one of us would die while saving orphans from a submarine fire), but The League is not going to jail for posting pictures of Superman online without the express written consent of the NFL or whomever.

I think the good folks at Get Your Censor On can help fill in some of the blanks.

Enjoy your internet full of nothing but Kim Kardashian updates.

Written by SCOTT SNYDER; Art by JOCK and FRANCESCO FRANCAVILLA; Cover by JOCK

Unlike a surprisingly vocal group on the comics internets, I wasn't pulling for Dick Grayson to remain Batman forever. For many, many reasons, Grayson is Nightwing, and the longer he stayed in the cape and cowl, the more likely we'd end up in some new "Kyle Rayner is my Green Lantern!" conversation a bit down the road as we dealt with that small section of the populace that came to Batman during the window of Grayson as Batman.

But I like the stories that came out of the era, at least those by Morrison, and I'm pleased to say I quite enjoyed Scott Snyder's The Black Mirror collection as well (and, hey, what are the chances he's an Arcade Fire fan? Pretty high, I'd guess).

Black Mirror started as a series of back-ups in Detective and dovetailed into the mainline story, which must have been quite thrilling to watch unfold over the course of the year. I missed all of this as during the post Return of Bruce Wayne era, I have relegated all new Batman reading to trades.

Snyder's Batman is as close (closer than Morrison's) to how I've been interpreting Gotham and Batman's place in the city as anything else I've read. I'm not sure its exactly Alan Grant-riffic, but it is back to Batman as the line of defense against a city under siege by human monsters (which, actually, is more or less how I read Arkham Asylum by Morrison some years back. It was the pen for all the monsters/ the inside of a madman's mind).

The story throws red herrings, plays off paranoia developed after living so close to the Gotham's violent undercurrent and explores the lives of characters that were present in the assumed past of Batman comics, but whose lives were moving steadily forward in parallel to those of Batman and Robin, but off frame.  Sure, its a bit odd to come in so late in the game with this entirely new backstory, but it fits for the Gordon family, and fills in gaps and works with ellipses Miller left at the end of Year One that no other writer has ever picked up.

It does, however, raise  some questions even while it cements issues around "so how old is Batman, exactly?"

But the real success here isn't just in playing well as a continuity cop.  Snyder manages to tell a compelling page turner of a tale that I thought worked great as a collection, even while enjoying the episodic nature of the book.  The various alleys taken, from the Etienne story to Tiger Shark to our final conclusion all manage to fold together nicely, and while its not so much a mystery at some point, its still manages to work as character study for some of our primaries and for Gotham, itself (something Snyder is exploring in current issues of Batman.

I'd be remiss not to mention the impressive collaboration of artists Jock and Francesco Francavilla, who managed to blend their two distinctive styles of Klaus Janson-esque scratchy line art and illustrative exactness a la Mazzuchelli.  Its a nice blend as they handle separate assignments within the same book. And that's not to mention the exemplary coloring.

Its an odd contrast to the sort of stuff I felt Tony Daniel was doing over in Batman last year and that it seems he's doing in Detective now that just feels so much like watered-down retreads of other stuff you've seen before.  Snyder seems to have found a way to tell a fresh story using familiar parts of the Batman mythos without the need to overhaul everything we've known, and that's not small thing.

Anyhoo...  its a little pricey as a hardback, but if you can find it on sale, its a nice, solid Bat-read. 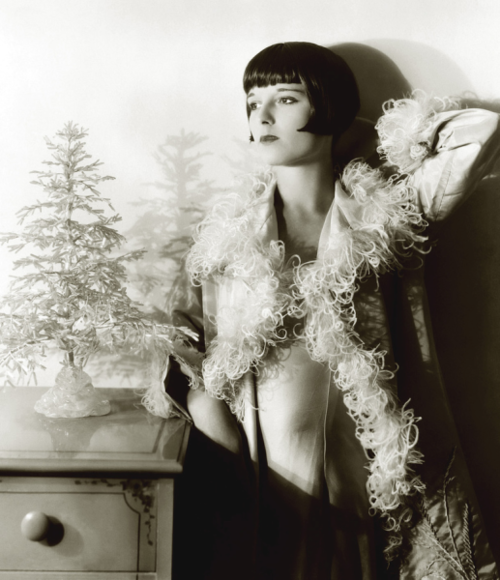 Brooksie just isn't going to make a big to-do about decorating, one supposes. 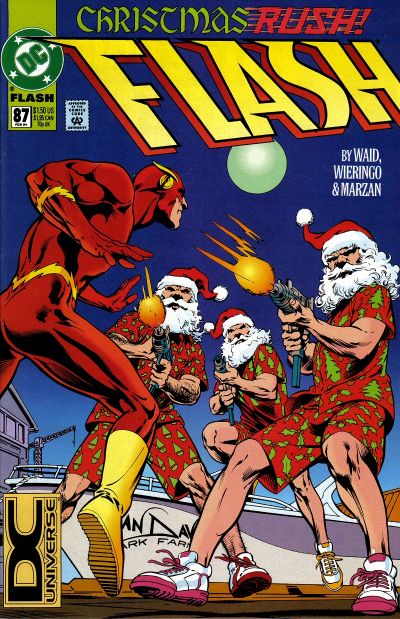