Free Comic Book Day is still going on all over the place! I, however, am done for the year.

I met up with PaulT, we visited the comics tent at Austin Books and Comics on Lamar, then went into the shop. I picked up a back issue and an action figure I was missing from my line-up (I'd already been to the shop this week). Then headed next door to Guzu Gallery where Paul picked up a couple of prints and I bought something for Jamie.

Then we went to House Pizza, and it was totally great.

While waiting in line, I got to meet vintage Catwoman.  She looked purrr-fect.  Yes, I just did that.


Apparently I was having hair issues today.  Too much product.


We were allowed 10 comics from the tent.  I picked up nine because I cannot count.

In group A, we see Donald Duck Family, Superman Family, Escapegoat (a leftover from last year), and Atomic Robo and Friends 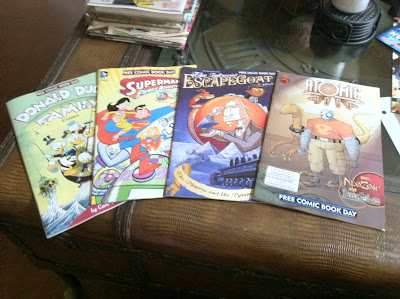 And here we see the hardcover free comic (I know, I don't get it either) for Mouse Guard, Ride, Graphic Elvis (just nice pictures of Elvis.  How was I to say no to that?), Dinosaus vs. Aliens and oddball offering, Animal Planet's World's Most Dangerous Animals. 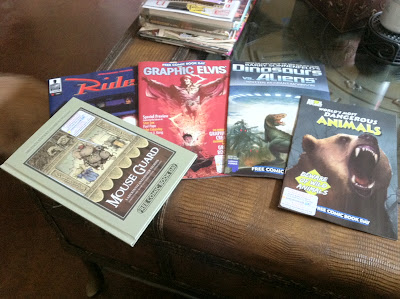 All in all, a really fun day!

It's no secret that at this point, of the New 52 relaunch, I may actually be down to just Action Comics.  This week, more out of knee-jerk loyalty than anything, I also checked out Levitz and Perez on World's Finest, but I don't think that book is going to be my thing, either.

What I am interested in is what Grant Morrison is saying and doing with his run on Action, a book that by issue 9 has already suffered two fill-in issues.  If readers were having doubts, what with the broken momentum of the first 8 issues and the seeming "well, here's the set-up" vibe of the book, Action Comics #9 is a remarkable comic, and, it seems, possibly Grant Morrison's line in the sand to the overlords at DC, to the readers, and to maybe very specific people.

Morrison has long said he tries to manage reality by working his will through comics, and for anyone paying attention, the allegories and symbols are riding on the surface level.  Not the least of which is Morrison's decision to put an entirely reimagined, African-American Superman on the cover of his book (with the help of Gene Ha).

CarlaB was good enough to share some pics of the aforementioned Rude George!

Brought to you by CarlaB, David and, of course, Xander!

As we plod on through talking about every movie we watched in 2012, I am obliged to mention that we spent this evening watching 2011's The Muppets. 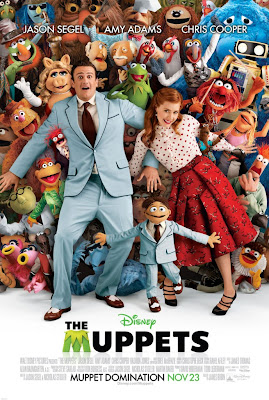 We talked about the movie in passing back in Novemberish, and I stand by what I said back then. Its a great all ages film, and the sort of thing I hope parents are sharing with their kids.

I will note, on this go-round I noticed that within about twenty minutes of the same movie, the movie expressly makes a point about believing in yourself as a sign of understanding yourself, but then concludes the movie by having Kermit tell everyone he believes in them.  So, you know, whatever.  We all believe in everybody.  I guess that's okay.

MCA Merges with the Infinite

I am shocked and saddened to hear of the passing of MCA of The Beastie Boys, most certainly a seminal band for my generation.

Here for an obituary for Adam Yauch.

And here is one of the greatest songs and videos of the 1990's.

May the 4th be with you!

You know, I'm sort of a non-observant Star Wars fan at best.  But as I understand it, the movies and TV show are very popular with the younger set, and I won't be the one to rain on that parade.

Here's to Yoda, Wookies, Princess Leia in her snow suit, and better times.  And, hell yes...

One thing any comics-fan who immerses themselves in social media will now see on a daily basis is at least one Kickstarter campaign to produce a graphic novel or comic.  Sometimes its more than one.  Often its a RT on Twitter from a famed writer or artist who is doing nothing but RT'ing a pleading Tweet sent to said famed artist, and for whom RT'ing the original Tweet is an action of about 2 seconds reading and clicking.

I am not dubious of the Kickstarter technology, rules, etc...  If you are unfamiliar, Kickstarter is a site that enables folks working on creative projects to raise funds.  Basically, you get a description with web content attached (video, images, too much text in many cases), telling you what the artist is doing, why and who they are.  Then a dollar total they are raising, and what it'll go towards.  The answer is not: putting food on my table.  It's usually something like "production costs".  Its basically intended to keep the artists from going deep into debt while they produce the record, comic, statue, indie film, whatever...

There are then levels of support.  Artists are obliged to usually offer something better at each level.  $1 gets you a thank you.  $30 gets you a copy of the album.  $10,000 gets you a a day with the artist and a big thanks, plus a t-shirt.  Something along those lines.

For a better idea of what this looks like, I invite you to visit Kickstarter.com, but to look specifically at the page for musician/ performer Amanda Palmer.


If you've properly budgeted for your project, then its possible this can work very well for you.  Especially if you know a whole lot of people, so you're not counting on that one person to give you $10,000. 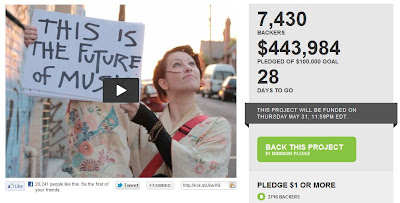 Not all that long ago, Palmer was signed to a label both with her breakthrough act, The Dresden Dolls, and then as a solo performer.  Dissatisfied with the work Palmer thought they were doing on her behalf that she knew she could do herself, she ended the contract and is now a woman without a country, unless you count her actual fanbase as a country, which, really, she should.

Ann Miller Sez: Time Out For Rhythm (No Post Thursday)

Sorry, y'all. I was reading and doing other things.

Now for a game I like to play called:  What Are You Doing There, Ann Miller?


Are you entering a saloon with no walls from an infinite void?  Or leaving the saloon of existential dread?  What do you hope to find?  Or what are you trying to leave behind?  The ground seems ashen and dreadful, but you seem lively and full of hope and promise.

What are you doing there, Ann Miller?

Here's Ann Miller tapping at 1 Billion Taps Per Second in "Time Out For Rhythm".

And Jamie says "you don't move your arms when you tap". Ann Miller and I say "P-shaw!" 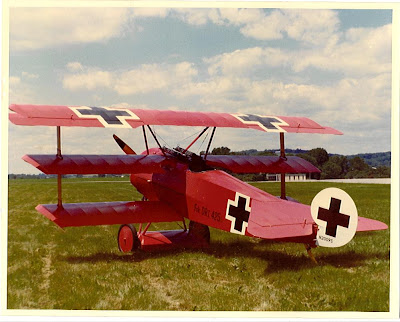 
*there's a whole song about Snoopy vs. von Richthofen.

This Saturday is Free Comic Book Day, which means comic book stores across the country will be hosting events at their shops where they will be giving away promotional comics aimed at a wide variety of ages and tastes in order to get the public a bit more familiarized with what comics are like these days.

Most stores know how to do this right, and it can be a lot of fun.

I'm going to Austin Books and Comics with PaulT where, really, I plan to distract Brandon while he tries to work.  Then we'll probably grab some lunch.  If you're up and about that early, let me know if you want to hang out.  I believe our plan is to be in line by 11:00 AM.

I've read that ABC will have things like:
So check your local listings and get out there!

Oh, also - PARENTS.  You can preview the comics here.  You might want to check out the books before assuming they're right for your wee ones.