I do recall that when Batman Begins was released, it wasn't really an event.  I certainly didn't rush out to the theater to see it, and when I finally did catch it, the theater wasn't packed.  I believe the common mythology is that Batman Begins did fine at the box office, but nobody would mistake it for a spectacular game changer.  Then the movie hit home video and cable, and people sort of freaked out about the movie at that point.

Honestly, I remember a lot of people I worked with in Arizona asking me about the movie around Christmas when the DVD hit the market.

In anticipation of Saturday's viewing of Dark Knight Rises, Jamie and I are re-watching the first two Chris Nolan helmed Bat-flicks.  If you'd like to join us Friday for Dark Knight, we'll be here with bells on.

The bottom line is that I think this movie is really a pretty darn good Batman movie, especially in 2005 when the last Bat-flick I had seen at the time was Batman and Robin.  However, I'd argue that once Nolan was able to cast off the shackles of WB studios and make a Batman movie without producer notes, their "help" casting the film, etc...  He made a movie that a whole lot of people liked better, and that stands up a bit more strongly upon review.

So, something I've been doing of late is just basically not bothering to learn much about a movie before I go see it.

There's a lot of press out there about Dark Knight Rises.  Entertainment Weekly arrived in the mail with, seriously, a horrendously designed cover.

I'm not going to read the articles on the movie because, well, at some point I'd like to just sit back, watch a movie and tear it apart on it's own merits.  I don't need to read what Christopher Nolan was thinking until after the movie.  If I care at that point.

Why can't I do a Kickstarter or Indie-Go-Go to fund my home repairs?

I walked into work around 12:00 today, slouch shouldered and bummed.

You see, Austin has not experienced much weather other than Arrakis-like heat and the occasional Degobah-like humidity for about, oh, two years.

Not so long ago, in May, the sky tried this thing called "raining" again, and at first we were overjoyed.  And then one night I was about to go to bed when I noticed a large puddle had formed on our dining room floor.  I immediately blamed Lucy, but even her mighty bladder wouldn't have held that much, and besides, she hasn't had an accident in years.  So I looked up and a chunk of plaster was missing from the ceiling where we had a drip.

For reasons unknown to science, in the late 1980's someone let Ralph Bakshi and John Kricfalusi (of Ren and Stimpy fame) make a Mighty Mouse cartoon.  It's run was brief, and it went down in a hail of PMRC bullets when some killjoy thought Mighty Mouse smelling a handful of flower petals was him snorting Scarface piles of cocaine.  Which it was not, but this was Nancy Reagan and Tipper Gore's America, airing in the same time when people really believed in hidden messages in metal albums, and so the show disappeared.


If Mighty Mouse is a Superman analog (and he is), then he needs a crime-fighting pal. Bakshi and his crew obviously had their eye on Batman comics at the time, giving us a pretty well post-Miller Bat Bat, but with more than a hint of Burt Ward in The Bug Wonder (the red, tick-like fellow atop Bat Bat's shoulder).

This was all during an era where Bart Simpson was still considered terribly edgy and bad for children, when cartoons were mostly considered strictly juvenile entertainment. The goofy satire and riffing on old serials and whatnot was surely lost on the kids who were supposed to be watching the show. But with a soft spot in my heart for Mighty Mouse, I'd tuned in - and I thought the show (when I could catch it) was pretty great.

You at least need to skip to 0:49 to see Mighty Mouse calling upon Bat Bat for assistance.


You also have to like how he drives the "Manmobile".

In my possession I still have the Wendy's Kid's Meal collectible Bat Bat. 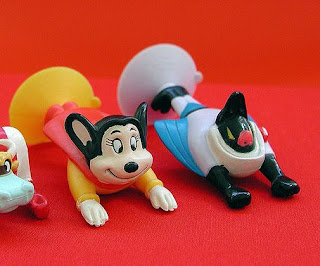 The Weekend in Signal Watch (and the week ahead)

If I didn't do all that much this weekend, give me a break.  It's been a long six weeks or so, and Sunday night my air conditioner quit.  Again.

Me and the service company are going to have words.


The big news out of San Diego as I saw it:

Odd Moment of Realization of How Badly DC is Handling Themselves At the Moment - courtesy, Randy


Hey, did you hear they're making a Guardians of the Galaxy movie?  With Rocket Raccoon?

And I wrote back about how I was excited, even though I hadn't loved the comic, but the movie might give the neat idea a second lease on life.

Then, about three minutes later I realized:

Rocket Raccoon will get a feature film before Wonder Woman, The Flash, Aquaman, or any of DC's other staple players.

Look, I LOVE Rocket Raccoon as a concept, and I loved his early appearances.  I read all that mid-00's Marvel cosmic stuff til I got bored at some point during some cross-over or other and noticed I wasn't really missing the series.  That, and having your cast just standing around glowering isn't characterization.  Just saying.*


But, man...  Despite Marvel's fairly well mapped ability to turn themselves into a brand and studio, DC just simply cannot get their act together enough to simply copy Marvel.  Even the comments at Comic-Con from WB employees read basically as "if Superman fails, we're done".  Now, they didn't say that exactly, but there's no bold plan on the table at DCE or WB.  It's all conservative number crunching - and the problem with that is that there's no magic formula for making a blockbuster.  Instead, you wind up with a paint-by-the-numbers movie like Green Lantern that's greatest weakness was the utter predictability and 90's checkbox storytelling mentality of the movie.  Every decision was a "safe" one, from casting the supposedly bankable Ryan Reynolds to the pat telling of the origin to casting Angela Bassett as Amanda Waller.

In the end, the movie arrived as a lifeless husk.

And the hiring of Zack "I did comic movies before!" Snyder for Superman?  WB wears their risk aversion on their sleeve.

The fact is, Marvel has put out more duds than big wins, but the big wins help build the brand so you'll at least give their flicks a chance.  And they've been willing to do some interesting hiring, from Sam Raimi to the Crank guys on the latest Ghost Rider (wait, Ghost Rider has had two movies and Shazam has had none?), and all that means they're constantly mixing up the formula to get new blood and excited talent in there.

Anyway, if you told 14-year-old-me that I'd be looking at a Rocket Raccoon movie in 2014, I would have burned you for a witch.

*I went to high school in North Houston.  I associate standing around glowering with drunk red necks sizing me up to see if I'm some uppity city folk they might need to learn a few things

Ms. Barbara Stanwyck would have been 105 today. 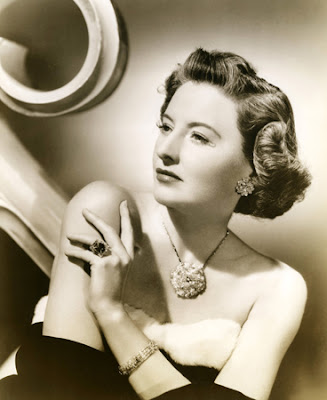 She played all sorts of rolls, and had an amazing career, from Ziegfield Girl to film and eventually to television.  But we'll always love her best for Double Indemnity.

As we head toward Wednesday and the release of the much-anticipated Dark Knight Rises, I cannot help but reminded of a simpler time when the average person on the street did not associate inverted semi-trailers and Christopher Nolan with The Dark Knight Detective.

The comics are, of course, silent.  We imagine the lonely street sounds of Gotham, and we can believe the sound effects splattered across the page in beautifully rendered and colored lettering.  But never do comics cross over with music, not unless they're brought to the screen.

I was at basketball camp in the week before the release of Tim Burton's highly anticipated Batman.  In fact, I had read the novelization of the movie during my downtime at camp that year.  The session ended mid-day on Friday, the day Batman hit theaters and it was a whole thing making sure I got to the movie that night (which I did.  Thanks, Peabo's Mom!).

It's hard to explain exactly how Bat-Crazy I was (very publicly) in 1988, and what a big deal the film felt like at the time.  I'd been following Batman's production via magazines, newspaper articles, notes in the comics and other places, had taped the trailer and watched it over and over...

The camp took place at the University of Texas and we stayed in the dorms at The Dobie, and I still very much remember everyone stopping in the cafeteria line to watch the video for "Bat Dance" (there was a TV on MTV for some reason near the door).   The video was appreciated, but not as much as in 1987, when the video had been for George Michael's "I Want Your Sex".

Like anyone else born in the 1970's, I had a warm spot in my heart for Prince, but found him an odd fit for Batman. It's only in cold hindsight that I have to assume this was neither Tim Burton nor Prince's doing so much as that of WB executives.  But who knows?  (Probably Prince, I guess.). 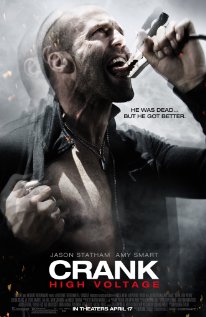 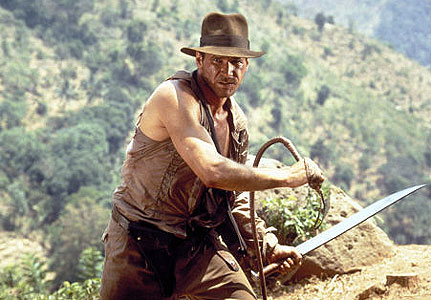 Happy B-Day to my imaginary friend from at least three movie franchises, Mr. Harrison Ford.  On Friday the 13th he turned 70.

Far be it from us at The Signal Watch to ignore the birthday of the Greatest Living American.