On Tuesday, Jamie informed me that she didn't care if "The A-Team" was awful, she wanted to get out and see a really big, dumb action movie. I am either with her or against her.

I am probably going to see "Giant" by myself on Sunday, so that may or may not answer that particular question.

I don't know what it is. Likely the very hot summer that has descended upon us, but I am having a small spate of not-giving-a-damn. That doesn't help much with blogging about movies, comics and TV.

Show I am watching: Tremé

I'll be down when this season of Tremé ends. I didn't catch The Wire when it was on (I have plans for watching it while riding my elliptical machine), so this is my first time around with these creators and some of the actors.

I read somewhere that a reviewer liked Tremé until they felt it got "a little preachy".

Not only does that suggest you've missed the entire point of the show (it's like complaining that they kept talking about drugs on The Wire), but its also exactly the issue New Orleans faced then and from which they never could recover. 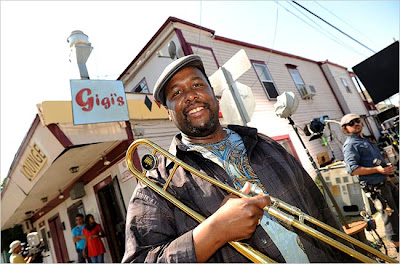 Anyhow, its not the best thing I've ever seen on TV, but its a very well executed show, and one of the few examples I can cite of what TV can do as a medium that seems to respect and expect something from its audience.

You also can't beat the casting (I don't watch CSI, so its been a pleasure to see Khandi Alexander on TV again after loving her on the late, great News Radio).

Show I am Watching: The American Experience

Probably one of the best programs on PBS, The American Experience is a lazy ex-history major's dream program. 1-2 hour documentaries on all sorts of topics from American history, especially of the last 150 years (from when photographs or film are available). It's a remarkably well managed series, especially given the wide ranging contributors and topics, but its almost always worth the watching in order to better understand the US.


Show I am watching: Mythbusters

Who knew watching fireballs would still be entertaining after this many years?

I still love Mythbusters. Say what you want about TV as fantasy fulfillment, but this show really does answer a lot of questions I never knew I had and more than occasionally tries something I'd really like to do (see: parking a car behind a 747 engine). Plus, explosions. 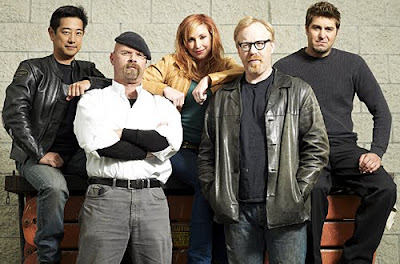 I can't believe none of these people has sustained serious injury

Anyway, I recommend following Adam and Grant on Twitter. Totally worth it.

True Blood. And that's pretty much it.

I taped my first episode this week, but haven't watched yet. Perhaps I'll be a convert?

I think I'm with you on the whole "not-giving-a-damn" feeling...it kinda sucks too.

I watched Season 1 of The Wire this weekend. I enjoyed it. It wasn't the best thing ever, but it was good enough that I watched 12 hours of it on Saturday. I need to catch up on Treme, the first episode was pretty good.

I feel that you can never get too old to appreciate a good explosion.

I took my father in law to the A-Team and with my lowered expectations I ended up enjoying it. It was a great excuse to eat a huge bag of popcorn at least. It was too bad that the director couldn't figure out a way for Bradley Cooper to take his shirt off for the ladies once or twice or two thirds of the movie.

I've got one episode of Flashforward to go. I'm not sure while I'm still watching it other than I'm a completest. Stories meandered all over the place and now things are rushing to an end that doesn't seem at all satisfactory.

I'm also keeping up to date on the new Doctor Who. I think that Matt Smith is doing a great job giving the Doctor some manic energy and under Moffat's direction things are turning a bit dark. The final two episodes of the season seem to be setting up quite the cliff hanger.

I'm with Simon on being a fan of this new Doctor Who, Matt Smith. He's managed to take a different angle and sort of change the whole tone of the show.
Not sure if anything else is on that's good this summer. I wish Caprica would come back.

I've been very impressed with "Treme" and the world building that David Simon has done. I was a big fan of "The Wire," but there's something different about "Treme" that I can't quite put my finger on.

As for Matt Smith, the jury is still out on him. He has his momemnts, I suppose, but I was expecting better episodes since Moffatt became show runner.