If you didn't guess by the name of this blog and the picture of the cub reporter above, around these parts, we're fans of Superman's Pal, Jimmy Olsen. 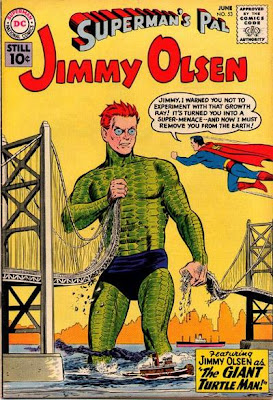 Jimmy is one of the weirdest characters in comics, who too many comic writers and creators have chosen to ignore over the past two or three decades (but you have to give Grant Morrison credit for his dead on, amazingly modern take on Jimmy in "All Star Superman"). He had his own series for years, starred in the TV series, has appeared in every Superman movie (and Supergirl), but the characters has largely been forgotten by the public at large.

Comic geeks somehow seem to find Jimmy one way or another, usually by stumbling across the imaginative and bizarre covers to Jimmy Olsen comics.

But now, DC is giving Jimmy a spotlight once again. Monday, DC announced that Jimmy will be receiving a back-up feature in Action Comics. And it sounds like the writer is staying true to the character.

As if you didn't have a reason to pick up Action Comics, already.

I don't say this often, because I don't feel envious of other people that often, but I am immensely jealous of writer Nick Spencer. 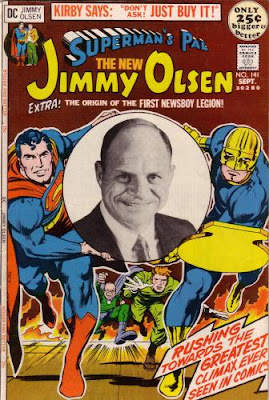 I wouldn't say that the public has forgotten Jimmy Olsen. I would say, rather, that Olsen is part of that curious melange of the Superman myth ingrained in the mind of the public. You've written before that the general public has a stereotype of sorts in its mind as to who Superman is; I think Olsen is a part of that due to his familiar presence in the films and TV series

Hmmm. Maybe. I am probably actually okay that most people associate Jimmy with Jack Larson or Mark McClure. The world is not yet ready for the truth behind Jimmy Olsen.